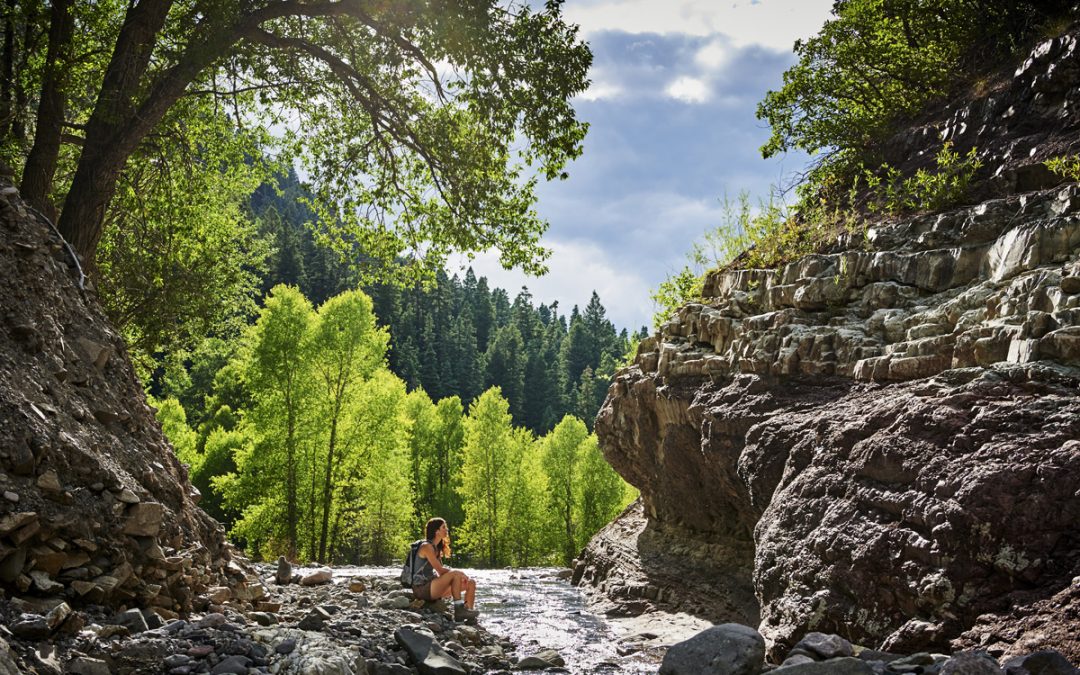 A recent study concluded that people are happiest when near water, providing one more reason why work to preserve, restore and provide access to Colorado's waterways is crucial.

An elixir that sustains life through hydration and hygiene, water since antiquity has been a highly valued means of migration, transportation and commerce. Today, Colorado citizens and lawmakers alike are increasingly aware of how powerfully water not only supports life but also enhances it. Poets, painters, photographers, filmmakers as well as advertisers, realtors and hoteliers have long recognized that oceans, rivers and ponds impact us emotionally. In our market-driven economy, water is used to sell everything, including water itself. As a recent issue of Conde Nast Traveler proclaimed, “In, on and by the water… everything is better. “

The health benefits of exercise in water are well documented. According to the Centers for Disease Control and Prevention (CDC), swimming not only provides the benefits of aerobic activity but also engages and tones almost every muscle in the body. Studies show that water-based workouts can be sustained for longer periods with less joint and muscle pain than land-based ones—and people report enjoying them more. Furthermore, the CDC notes, water aerobics and hydrotherapies can benefit people suffering from asthma, diabetes, heart disease, arthritis and fibromyalgia as well as aged and frail populations.

The psychological effects of water are only starting to be systematically examined but the work is wide-ranging and extends far beyond the swimming pool. Neuroscientists, mental health clinicians, sociologists, geographers, anthropologists and naturalists today are engaging questions on the restorative qualities of water.

Yet as a subject of scientific inquiry, water presents a huge research challenge. It can refer to an ocean or a hot tub, a fountain, fish tank or flood. It also exists in solid, liquid and gaseous states. Because of its ubiquity and complexity it is often conceptualized as “blue space” and studied in contrast to “green space,” where much of the early research on the benefits of nature has been focused.

In his 2014 book Blue Mind marine biologist Wallace J. Nichols was one of the first to argue that water soothes our turbulent 21st-century souls in profound ways that can be measured and quantified. The most comprehensive investigations Nichols points to come from the University of Exeter Medical School in Britain. Launched in 2009, the “Blue Gym” project examines the impact water environments have in both urban and natural settings. One of their early findings: People living near seacoasts are “healthier and happier” than those living inland.

“In the arid West, we’re innately drawn to water. It can soothe and inspire us,” says Jim Petterson, Trust For Public Land.

A later Exeter study attempted to understand the impact of marine environments on people who don’t normally encounter them by sending subjects to an aquarium. Researchers found that viewing sea creatures for as little as five minutes resulted in lowered heart rates, drops in blood pressure, and increases in the mood-lifting hormones dopamine and oxytocin. And the more varied and populated the tank, the more beneficial it is for the viewer. This year, an additional Exeter study carried out in New Zealand and published in Health and Place concluded that people are happiest outside in nature and happiest of all when near water.

Exactly why this is the case remains an open question. Is it the visual of moving water with its waves, ripples, tides and eddies? Is it the sound of sea crashing against rock or lapping onto shore as gulls gather and call out? Is it the color blue? Or is it all of the above in combination? Whatever the reasons, one thing is clear: Water benefits us in far-reaching ways that have yet to be fully documented or understood.

In Colorado, water is a highly valued natural resource. World-class waterways include 158 named rivers, more than 5,000 natural streams, and 81 waterfalls that are heralded by both residents and visitors from across the globe. Protecting these resources has become a top priority.

The 1992 constitutional amendment that created the Great Outdoors Colorado Trust Fund  (GOCO) is a prime example of this commitment. The ballot initiative, approved by 58 percent of voters, mandates that half of the proceeds from the state lottery be used to “preserve, protect and enhance Colorado’s wildlife, park, river, trail and open space heritage.” Since its inception, GOCO has provided $917 million in grants and investments for close to 5,000 projects across the state.

Along the Front Range, water recreation gets additional support from the Urban Drainage and Flood Control District. Established in response to the massive 1965 flood that claimed 21 lives and brought devastation all along the South Platte River, the district serves Denver and 39 other municipalities from Boulder to Castle Rock. Rehabilitating the blighted banks of the South Platte has been an important part of its primary flood control mission. Urban Drainage projects have created river parks with beach entries that serve kayakers, tubers, and families wanting a day by the water; slowly, and in collaboration with groups such as The Greenway Foundation, this work has started turning an urban eyesore into a prominent asset.

Statewide, a key issue going forward will be access to rivers and streams that are “an important part of our identity,” says Jim Petterson, Southwest and Colorado program director at the Trust for Public Land, an organization that works to create parks and protect land for the public. “In the arid West, we’re innately drawn to water. It can soothe and inspire us. The same reasons that drew our forefathers to these waters—reasons of sustenance and migration—still linger in us today.”

Recognizing this innate value, Exeter scientists say the broader goal of their work is to give citizens information they can act on. This includes making sustainable fish choices, reducing the use of plastics, protecting the “richness and beauty” of wild waterways, and encouraging the development of blue spaces in our increasingly urban environments.