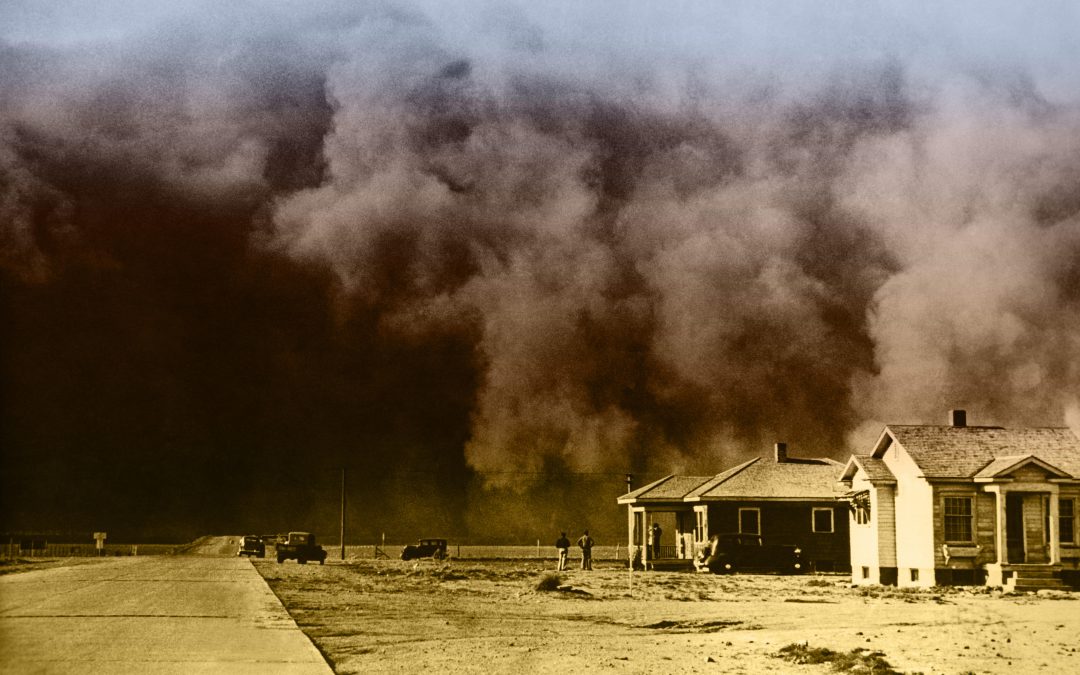 The 1930s Dust Bowl in southeastern Colorado offers a cautionary tale about agriculture at the intersection of rapid changes in temperature and precipitation. Homesteaders at the turn of the 20th century were drawn by the promise of free land. It worked well in the 1910s as rain was relatively plentiful and prices for wheat and other dryland crops soared because of war in Europe.

Then prices fell, and desperate farmers broke out more prairie sod to plant even more crops. In the ‘30s, hot and dry, dust-laden wind storms arrived, small at first, but intensifying each year until, by 1935, they lasted days at a time. Livestock were devastated. So were people. In Springfield, the Baca County seat, the morgue that March had six bodies, all victims of dust pneumonia, says the historian R. Douglas Hurt in “The Dust Bowl: An Agricultural and Social History.” Victims ranged from a 17-year-old girl to a 75-year-old man.

Ill-advised land use was at the core of what the historian Donald Worster has called among the world’s worst ecological catastrophes. Improved rainfall along with swift government action—including creation of the 692-square-mile Comanche National Grassland in southeastern Colorado—curbed the dust as the Dirty Thirties ended. It remains compelling testimony about the fragility of agriculture.

Climate models today vigorously point toward hotter, probably drier times ahead for farmers and ranchers on Colorado’s Eastern Plains as well as in mountain valleys and on the state’s Western Slope. How agriculture may evolve as climate and associated water changes occur remains uncertain.

The 2015 Colorado Climate Change Vulnerability Study by the Western Water Assessment and Colorado State University tells of growing seasons lengthening between 8 and 32 days by 2040 and, by 2070, between 21  and 46 days. The 2015 report also suggests decreasing crop yields due to increased heat stress and increased severity of droughts.

None of this is simple, though. Consider corn. It’s one of the three big crops in Colorado. Wheat, nearly all of it in dryland, has the most acreage at 2.26 million acres, followed by corn at 1.46 million acres—more than half of it irrigated—and hay at 1.44 million acres. Water needs for growing corn vary by location. It’s 27 inches at Burlington, but just 100 miles northwest at Akron, it’s 24 inches a year. Akron is a little cooler, has humidity that is a little higher, and a growing season that is just a few days shorter. Going north in Colorado reduces the evapotranspiration rates while going south increases them. 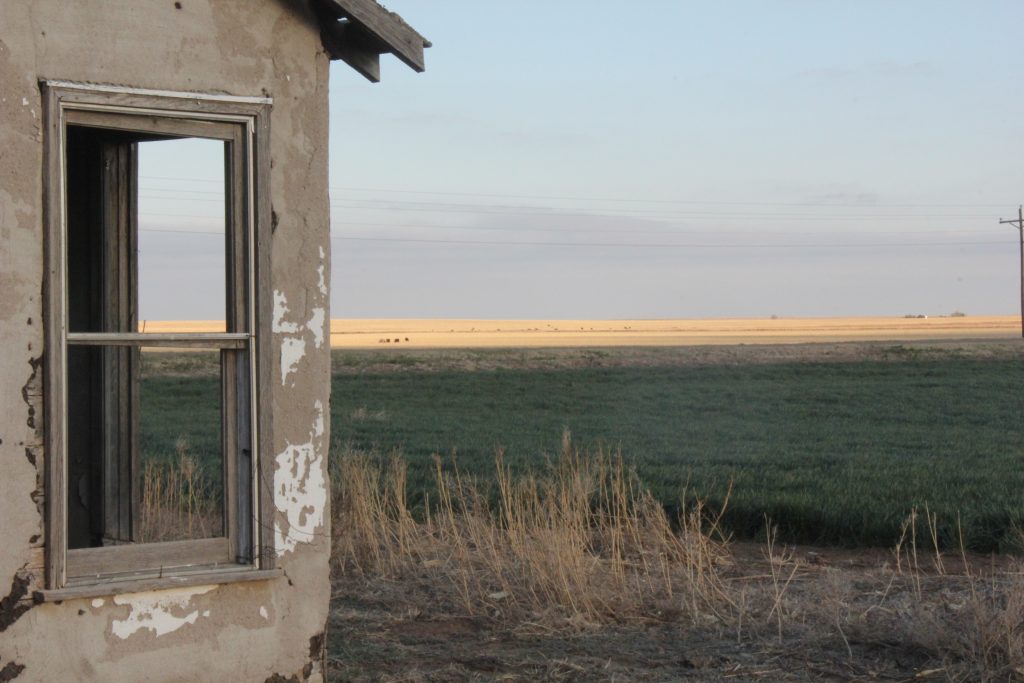 A 2012 paper in the journal Agricultural Water Management by researchers from the U.S. Department of Agriculture and Colorado State University lays out the complexities of water demand for corn in a warming climate. The scientists studied prospects for corn in eastern Colorado under four climate change scenarios. Corn, along with other crops, will benefit from increased atmospheric carbon dioxide, which is essential for photosynthesis. Those benefits, however, will be more than offset by other manifestations of climate change, which will reduce yield, they concluded. “Climate change might not increase the total water demand of the crop, as commonly thought, because of the reduced duration of the crop-growing period and the effect of increased CO2 concentrations of decreasing the potential evapotranspiration demand,” they wrote. Adaptive measures can reduce or forestall these declines in yield.

The mechanics of this reduced yield are explained by Joel Schneekloth, a water resource specialist with Colorado State University Extension. Schneekloth says the optimal temperature for growing corn is 85 degrees. At higher temperatures, corn plants begin to shut down. They don’t draw as much water, nor do the leaves transpire moisture at higher levels. Water use may not increase because of the increased stress of heat, but production will likely fall.

Less precipitation concerns Schneekloth more than rising temperatures. If less rain falls, then many crops will need more supplemental irrigation. In much of northeastern Colorado, that means mining the retreating Ogallala Aquifer even more extensively. Instead of pumping 13 to 17 inches of Ogallala water a year to get a corn crop, climate change-induced drought might require 21 to 26 inches a year of supplemental water to offset decreased precipitation, according to Schneekloth.

Schneekloth is stationed at the U.S. Central Plains Research Station near Akron, 150 miles northeast of Denver and just a few miles west of where the Ogallala Aquifer begins. He’s responsible for researching water management resources and providing education in the South Platte and Republican River basins. The latter generally overlaps with the Ogallala. The two river basins account for 45 percent of Colorado’s agriculture production. Sales, over half from livestock, were estimated at $7.8 billion in 2017 by the Colorado Department of Agriculture. Farmers grow corn because of high market demand. That corn goes to many large feedlots, several of which accommodate 100,000-plus cattle, plus many substantial dairies and an ethanol plant. “If they have irrigation water, they will grow corn, because that’s what the market dictates out here,” says Schneekloth. Being risk averse, he says, farmers won’t change until they have to.

When people ask about climate change and agriculture, Schneekloth reminds them of 2012, a record year for heat but also memorable drought. Akron got 8 inches of precipitation that year, half its average. “If the future climate is anything close to 2012,” he says, “everybody would pack their bag and get out of the country, because we couldn’t grow anything.”

ADAPTING ON THE FARM

The added pressure posed by a warming climate may push some water-short growers to convert irrigated croplands to non-irrigated dryland uses. That process has already begun in the Republican River Basin. The Ogallala Aquifer interacts with surface waters there. To meet multi-state compact requirements, federal programs have incentivized voluntary retirement of irrigated lands. Near Burlington, in Kit Carson County, where the thinning aquifer can no longer sustain full irrigation, research focuses on what happens to the soil and its productivity when the land ceases to be irrigated.

Meagan Schipanski, an assistant professor in Colorado State University’s Department of Soil and Crop Sciences, says in shifting to dryland, some crops can still be replaced by others with lower yields. Corn, for example, can be replaced by winter wheat. But sandy or highly erodible soils do not lend themselves to row crops and might better be returned to grazing pastures.

“Irrigation can often cover up some of our soil management weaknesses, but as we have less water or as the climate warms and evaporation increases, or as we get more intense rainfall or drought, poor soil management will show up and limit our agricultural production,” she says.

Schipanski and other researchers have been studying how to maintain higher organic matter in soils when less water is available for growing crops. Soil organic matter plays a critical role in how soil functions, affecting everything from nutrient cycling to the structure of the soils. It can have a huge impact on the ability of soils to take on water and hold it during drier times—or to absorb it during hard rains, instead of letting the water run off, eroding the land.

How soils are managed during a time of changing climate and declining groundwater may play a role in the success of cropping systems, says Schipanski. A 2018 paper Schipanski co-authored for the journal Agriculture, Ecosystems and Environment identified opportunities to intensify dryland cropping systems by reducing fallow periods, such as for wheat by integrating dryland corn, proso millet, sunflower and other crops. The result: improved soil carbon and overall profitability. 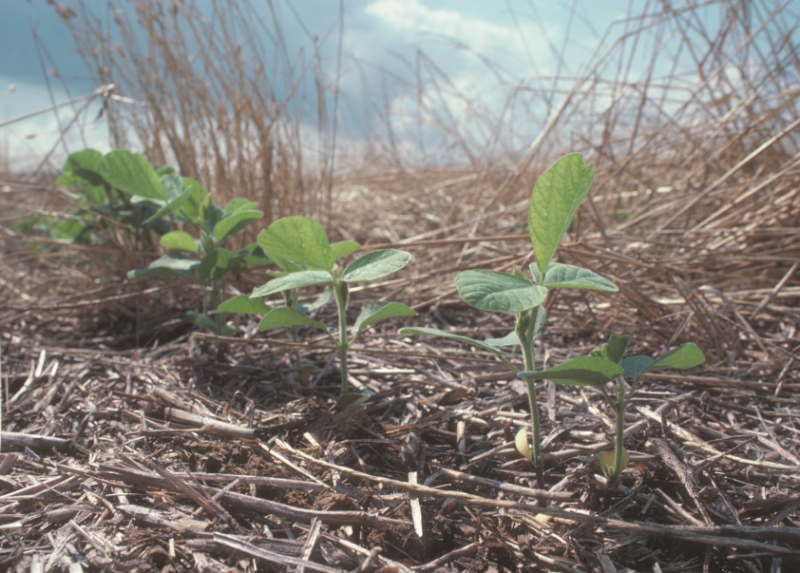 Young soybeans sprout up in the residue of a wheat crop. This form of no-till farming protects the soil from erosion and helps retain moisture. Courtesy NRCS by Tim McCabe

Schipanski leads a team that is evaluating how cover crops work in our water-limited region as a strategy for building soil carbon. That idea has gained much attention in more humid regions of the United States but hasn’t been as successful for dryland or water-limited crops. However, Schipanski’s team thinks cover crops will more likely succeed in semi-arid places like Colorado if they’re treated as forage crops that are grazed in the field as part of an integrated crop-livestock system. Still another option, which began gaining adherents broadly in the 1990s, is to adopt no-till or low-till practices by leaving more crop residue in the field under limited irrigation. These no-till practices add soil organic carbon and enhance water infiltration and storage while sequestering carbon, which helps mitigate climate change. The small increases in carbon of 20 percent or less can increase soil aggregation by 300 percent and also improve water infiltration, says Schipanski.

Farmers and ranchers have already been adapting, says Trevor Even, a doctoral candidate at Colorado State University. He interviewed 20 people from rural Colorado to understand their responses to risks ranging from drought and hail to wildfire and extreme storms. Colorado is already transforming, he reports, most profoundly through people sitting down at tables and hashing out plans.

Even’s grandparents ranch between Springfield and Lamar, at the XS Ranch. They still talk about the shadow of the Dust Bowl, a small climatic hiccup at the intersection of ill-advised agriculture practices. The rising heat and weather extremes predicted for coming decades will pose an even greater challenge to Colorado farmers and ranchers.