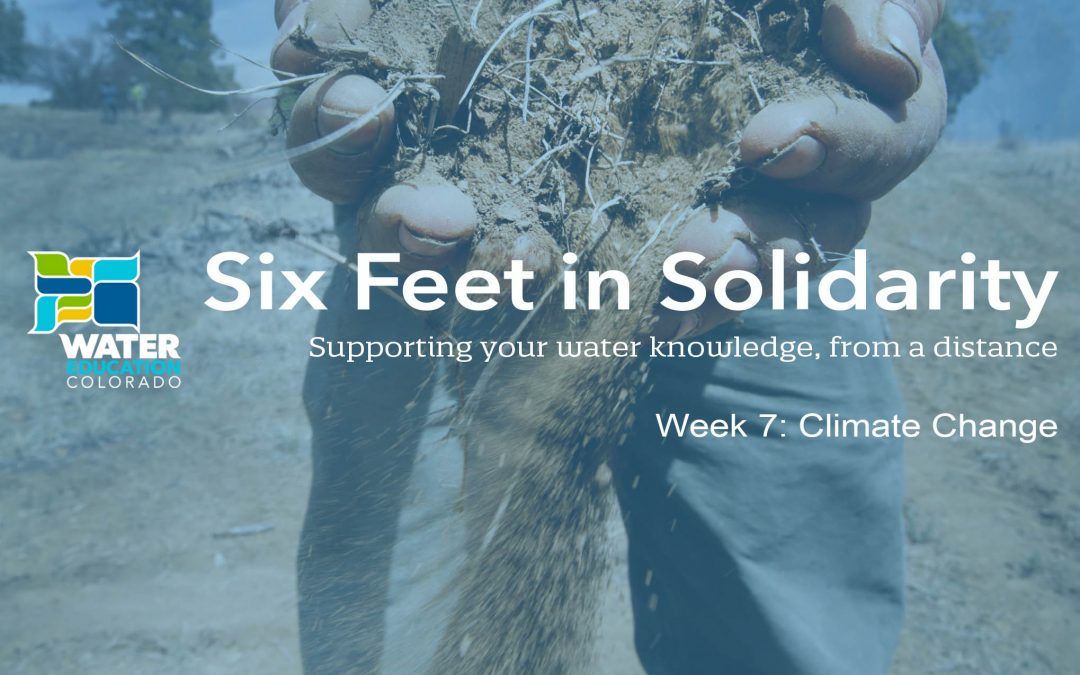 We’ve been sending a weekly “Six Feet in Solidarity” email on Thursdays to stay connected and continue serving up resources to build your water knowledge around different topics while social distancing.

We’ve been pulling from our library of publications, news stories, webinars, videos, radio programs, and more, and also sharing key resources produced by others in the water community for the six weeks.

Thus far we’ve sent emails focused on land use and water, stream management plans in Colorado, environmental justice and equity in the water sector, water reuse, alternatives to ag transfers or ATMs, and forest and watershed health. This week we’ll look at climate change and how it is projected to affect water availability in the West. Read on to learn more. And continue to be well!

What Will a Hotter Future Mean for Water? 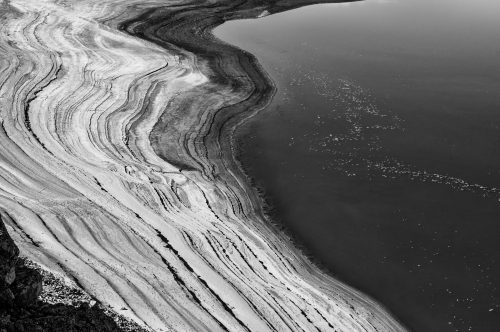 Coloradans are adapting to and working to mitigate climate changes as it manifests itself in the state’s waters, impacting all sectors. Photo by Matt Burt

One hot, dry year isn’t necessarily climate change. However, the myriad effects of climate change on Colorado’s environment and economy do begin with a basic fact: It’s getting hotter. Read about the following climate projections below in excerpts from “Finding Water in a Warming World” in the Spring 2019 issue of Headwaters magazine. 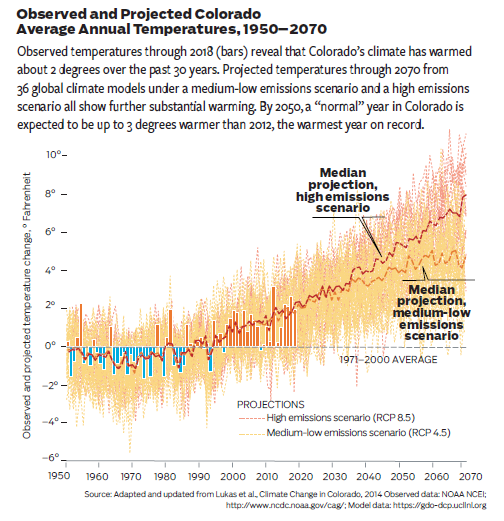 Since then, the warming has continued, with 2015, 2016, 2017 and 2018 coming in among the eight warmest years since 1900. Future levels of warming, most agree, will depend in large part on future greenhouse gas emissions: Under a “medium-low” emissions scenario, Colorado’s average temperature could be between 2.5 degrees and 5 degrees Fahrenheit hotter by 2050 than the 1971-2000 baseline. A “high emissions” scenario could push that warming to 6.5 degrees Fahrenheit by mid-century. Two degrees of warming would make Denver feel like Pueblo, and with 6 degrees of warming, Denver would feel like Albuquerque, New Mexico. 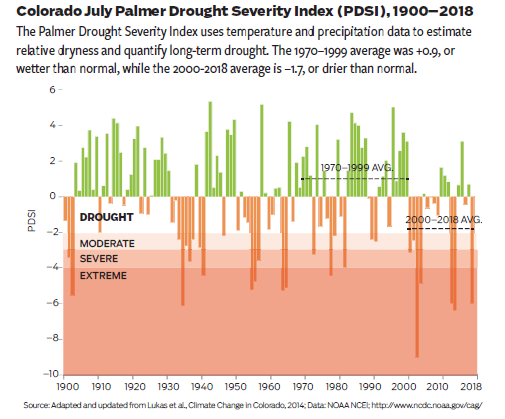 Climate models diverge as to whether climate change will drive more or less precipitation in Colorado. There is broader consensus that summer precipitation will decrease more than winter precipitation, and that rain and snow is more likely to decrease in southern Colorado than in the north. Due to warming, Colorado’s snow-line is expected to move to higher elevations, bringing rain rather than snow to parts of the high country and increasing the risk of winter floods from rain-on-snow events. Precipitation is also expected to concentrate in fewer, heavier storms.

We can likely expect an increase in the frequency and severity of droughts under climate change. Rising temperatures will mean that average years are more like drought years and that any given drought evaporates more precipitation and dries out the land more than it would have in the absence of climate change, making droughts more severe and leading to devastating impacts on crops, livestock, river flows, and municipal water supplies. 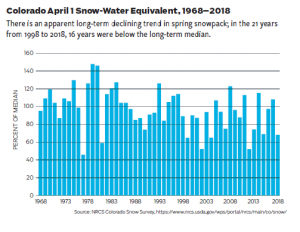 Colorado’s spring snowpack and runoff have likely already declined due to climate change. Those trends are projected to continue. A 2018 study published in the journal Climate and Atmospheric Science analyzed 699 snow monitoring sites across the West and found that since 1915 the “snow-water equivalent,” or the amount of water contained in snowpack on April 1, has declined by 21 percent.

Because more precipitation is falling as rain, compounded by increases in sublimation—where snow exposed to sunlight transforms directly from a solid to a vapor—Colorado is accumulating less snowpack. Less snowpack equates to less water that can be diverted for use in the spring and summer. The other challenge: Runoff is peaking one to four weeks earlier than it did 30 years ago. By 2050, peak runoff is projected to shift another one to three weeks earlier. That has major implications since peak runoff will be increasingly out of sync with the traditional agricultural and municipal irrigation seasons, summer rafting and fishing seasons, and wildlife migration season.

How is climate change projected to impact river flows? 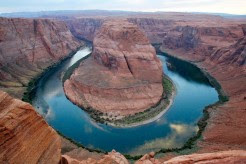 Native flows in the Colorado River Basin have fallen by about 18 percent since the current drought began in 2000, according to Brad Udall, a senior water and climate research scientist at Colorado State University’s Colorado Water Center.

In a February 2017 paper in the journal Water Resources Research, Udall and Jonathan Overpeck found that about one-third of that reduction is due to the higher temperatures brought on by climate change. Thanks to factors like increased sublimation, more water absorbed by plants, and longer growing seasons, Colorado River runoff has declined by about 4 percent for every degree Fahrenheit of warming in the basin, Udall says. Five degrees of warming by mid-century, then, could reduce Colorado River flows by 20 percent below the 20th century average, and flows could be 35 percent lower by later in the century if warming continues and precipitation stays the same. For a river that supplies water to 40 million people across the West, this is a dire forecast. 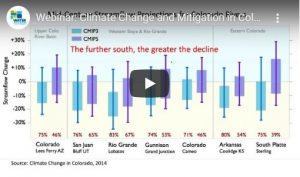 Through this June 2019 webinar, we explore the projections for Colorado’s water future, state-level policy initiatives that aim to mitigate climate change, and inspiring mitigation work at the water provider and wastewater level.

More Resources from WEco on Climate, Climate Change and Water

Headwaters magazine: What will a hotter future mean for water? 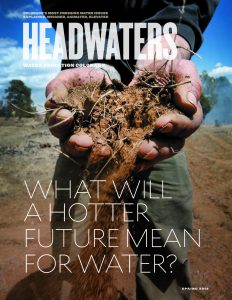 Colorado’s climate forecast is more than that—climate projections are also water projections. Warming will likely impact water with retimed flows, reduced runoff, more extreme precipitation and drought events, and water quality impacts. Coloradans are adapting to prepare for worst-case scenarios, while also stepping up to stave off the worrisome extremes associated with a high-emissions future. Read the spring 2019 issue. 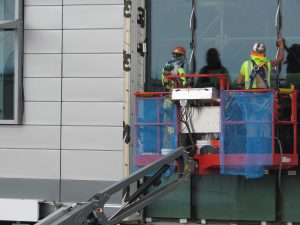 Colorado residents sobered by years of drought are learning to take shorter showers and use low-flow toilets, water-saving habits that have helped the state reduce its domestic water use 5 percent, according to a report released in July 2019 by the Colorado Water Conservation Board. Read the story.

A recent study found that a changing climate could cut the length of ski season in half in some parts of the U.S. by 2050, and more by the end of the century. This could have significant impacts on Colorado’s ski industry, which generates almost $5 billion annually and creates more than 46,000 jobs. Take a look at two resorts on Colorado’s West Slope to find out what they’re doing to protect the snow and the bottom line. Listen to the story produced through Connecting the Drops, our partnership with Rocky Mountain Community Radio stations.

Citizen’s Guide to Where Your Water Comes From 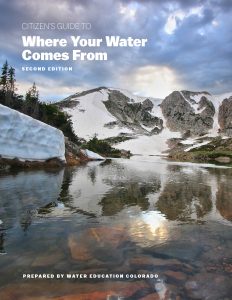 explains how climate, precipitation, rivers and aquifers affect Colorado’s water supply, and covers how water moves from its source to the end user through intricate distribution and treatment systems that have developed over time.

More Resources from Other Organizations

Colorado River Basin Climate and Hydrology: State of the Science 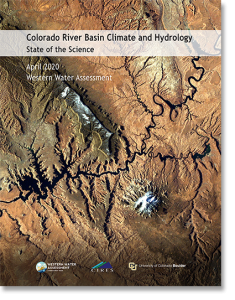 from Western Water Assessment aims to create a shared understanding of the physical setting and the latest data, tools, and research underpinning the management of Colorado River water resources. In identifying both challenges and opportunities, the report will guide water resource managers and researchers in efforts to improve the short-term and mid-term forecasts and long-term projections for the basin’s water system. 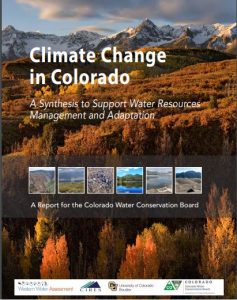 from Western Water Assessment in partnership with the Colorado Water Conservation Board is a synthesis of climate science relevant for management and planning for Colorado’s water resources. It focuses on observed climate trends, climate modeling, and projections of temperature, precipitation, snowpack, and streamflow. 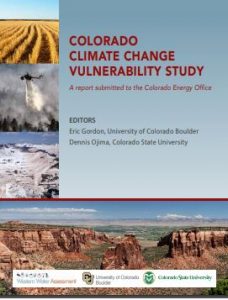 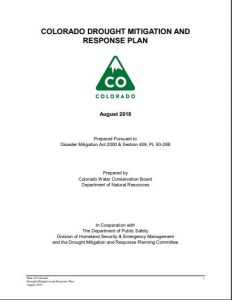 , prepared by the Colorado Water Conservation Board in 2018, was developed to provide an effective and systematic means for the State of Colorado to reduce the impacts of water shortages over the short and long term. The plan outlines a mechanism for coordinated drought monitoring, impact assessment, response to emergency drought problems, and mitigation of long-term drought impacts. 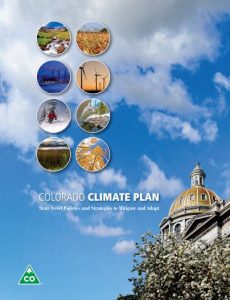 aims to promote state policy recommendations and actions that help to improve Colorado’s ability to adapt to future climate change impacts and increase Colorado’s state agencies level of preparedness, while simultaneously identifying opportunities to mitigate greenhouse gas emissions (GHG) at the agency level. In this plan, the major sectors of the state government are addressed, specific actions are called for, and policy recommendations are made. 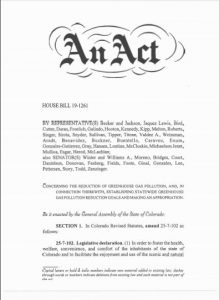 Volume 2-Section 14 of the Analysis and Technical Update to the Colorado Water Plan: Temperature Offsets and Precipitation Change Factors 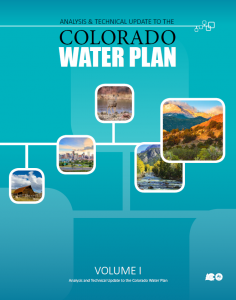 of the Technical Update specifies monthly averaged temperature offsets and precipitation change factors implicit in key planning scenarios for future year 2050. It also reviews the logic and methodology behind the development of the planning scenarios, explains the methodology used to calculate monthly average temperature offsets and precipitation change factors, and presents and discusses the analysis results.