Celene Hawkins, at home in the Southwest 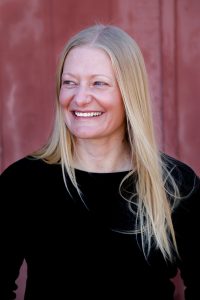 Celene Hawkins learned to practice law with the Ute Mountain Ute Tribe. At the University of Colorado Law School, she spent her law clerk summer of 2007 with the tribal environmental programs in Towaoc, drafting oil and gas regulations. She distinguished herself at C.U. with both a law degree and a Master’s degree in Environmental Studies. Graduating in 2008, she accepted a prestigious job offer from a large Phoenix firm, Snell & Wilmer. Celene had family ties to Arizona. Her mother, Kate, was a Professor of Nursing at the University of Arizona. She grew up in northern California’s Feather River country with her family in a solar-powered house near Quincy. Their back yard was the Plumas National Forest. Both her father, Sim, a custom jeweler, and her mother were volunteer firefighters, “My mother, who possessed a high degree of medical training, was sort of a big deal at the department.”

Within a year of moving to Arizona, Celene was back in Southwestern Colorado helping the tribe and all its members. “They have such a long tenure on the land, they pass on information by oral tradition. I learned to listen well.” She tackled everything there was to do, concentrating on environmental, water, renewable energy, and cultural resources protection. From June of 2009 to December of 2015, she had a running load of water and other cases, as many as thirty at a time. Working closely with technical and engineering consultants, the Tribal Council, and Ute Mountain Ute General Counsel, Peter Ortego, she waded into the complexities of the San Juan Endangered Fishes Recovery Implementation Program, the Ten Tribes Colorado River Partnership and water rights for the Animas-La Plata Water Project.

She most enjoyed the “one-on-one relationship” with tribal members. “I got to know how they felt.” She points out the example of the Tribal Park, into which the tribe carefully guides small groups of visitors into the other half of the Mesa Verde region’s treasury of cliff dwellings, petroglyphs, and water storage vessels. “They’ve taken the lesson of their ancestors to leave it alone while educating the rest of us about what it means to be history’s care-takers.”

Celene became a member of the Southwest Basin Roundtable in 2010, helping to formulate Colorado’s Water Plan. Since January of 2016, she’s been the Western Colorado Water Project Director for the Colorado Chapter of the Nature Conservancy, coordinating with community groups and the tribes. Her sense of place for the small town, farmland, river and canyon country of the southwest shows in way she met her husband, Tim, kayaking on the Animas River in 2007 within the City of Durango. They have a one-year old child, River, destined, as Celene says, to enjoy “desert moonrises.”

Keep your head down and do good work epitomizes Celene’s commitment to southwestern Colorado and the state as a whole.  She’s now a member of the Colorado Water Conservation Board, dedicated to working with the water plan as a “living document in the face of water scarcity, funding volatility, and increasing pressure on the Colorado River.” She sees water conservation, water user security, critical infrastructure and environmental protection measures as priorities Coloradans must address together.