As drought conditions intensify across Colorado, at least 14 cities in the Denver metro area say they will join forces to warn residents of looming water shortages and the need to cut back use this spring.

Denver Water’s Jason Finehout said a metro drought coordination effort would help ensure a consistent message on reducing water use in what is shaping up to be another alarmingly dry year.

“Right now 14 cities have signed up, but I expect that number to grow,” Finehout said.

Finehout said Denver Water would likely not decide until March whether to impose tough watering restrictions, but other participating communities, such as Thornton, are likely to move ahead.

Thornton’s John Orr said the city planned to implement restrictions sooner rather than later in order to prepare for what is likely to be a water-short year.

“Our team recommends that we treat this as a start to a multi-year drought,” Orr said. “We’re trying to be cautious.”

Orr’s comments came at the Jan. 21 meeting of the state Drought and Water Availability Task Force.

Last year was the state’s second-driest calendar year on record, according to the Colorado Climate Center, leaving soils ultra dry. That is worrisome to weather trackers and water utilities, because the soil is likely to absorb much of the water coming out of this year’s snowpack.

Right now snowpack statewide is at 78 percent of normal, according to the Natural Resources Conservation Service, and stored water supplies are also below average. Last year reservoirs stood at 107 percent of average at this time, but are now at just 82 percent of average. 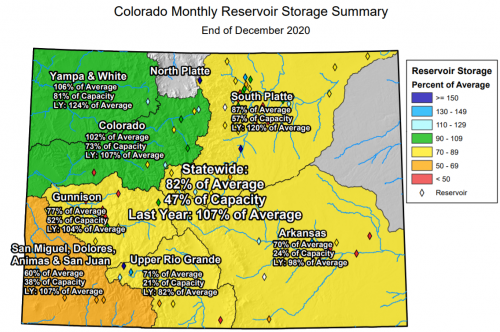 “2020 was a doozy of a year,” said Peter Goble, climate specialist at the Colorado Climate Center. “And we just continue to fall farther and farther behind,”

In November the state announced it would activate a statewide emergency municipal drought response plan for only the second time in its history, citing the deteriorating water forecasts. The agricultural portion of the plan had already been activated over the summer.

According to the U.S. Drought Monitor, the state is now blanketed in drought, with more than two-thirds of its terrain classified as being in extreme or exceptional drought, the worst condition.

Colorado has experienced four severe droughts since 2000, but the trend has intensified with the drought of 2018 barely lifting before 2020 brought searing temperatures and dry weather again.

Few expect this year to be any different. “My personal demeanor has gone from cautious to concerned,” said Swithin Dick with the Centennial Water and Sanitation District, which serves Highlands Ranch and which is a member of the new drought group. The district’s water reservoirs stand at 55 percent of capacity, a benchmark that is 25 percent lower than normal for this time of year, he said.