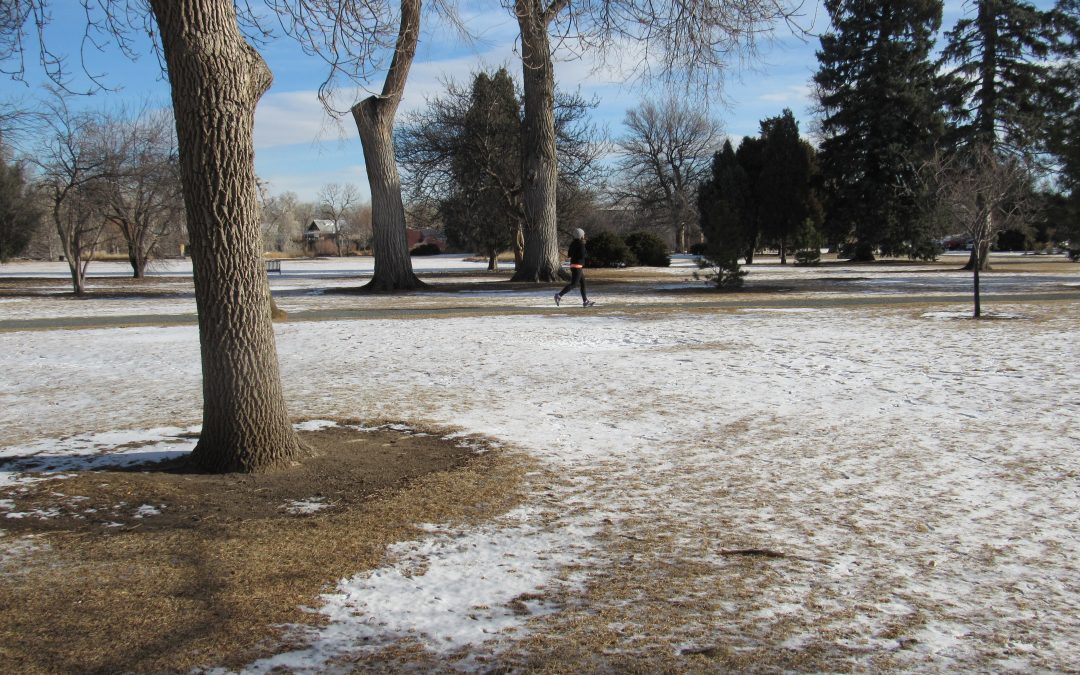 A woman jogs in Denver's City Park Jan. 23, 2019. Though statewide snowpacks have improved, the metro area actually slipped back into drought in December due to a lack of snow. Credit: Jerd Smith

Heavy snowfall over the weekend, topping two feet in some areas of the state, has brightened Colorado’s water outlook for 2019, with snowpack statewide reaching 106 percent of average as of Monday.

While the white stuff has weather watchers grinning, no one is throwing confetti yet, in part because last year’s devastating drought has sapped reservoirs and left soil desperately dry.

Snowpack is watched closely because it provides the majority of Colorado’s water supply. This year, even as snow storms rediscover the state after being largely absent last year, the deeply dry conditions on parts of Colorado’s Eastern Plains and its mountains mean that when the snow melts this spring, it’s not likely to produce as much water because the moisture will seep into the soils first.

Despite thigh-deep snow in places like Steamboat Springs and Breckenridge, the state has a long way to go to make up for last year’s deficits, officials said.

The southwestern corner of the state remains in what’s known as an exceptional drought, while places such as the Rio Grande Basin remain in extreme drought and large parts of the state, to a lesser degree, are still classed as being dry by the U.S. Drought Monitor.

“Even though we’ve seen pockets of improvement there are long-term consequences to the drought. We’re monitoring everything heavily,” said Taryn Finnessey, chair of the task force and senior climate change specialist with the Colorado Water Conservation Board.

Last year was Colorado’s second-driest on record. In response, in May, the state activated its drought plan, putting agriculture, water and weather agencies into monitoring mode, and making available to its 34 drought-stricken counties additional federal insurance funds for crops and small businesses. Late last fall, as conditions continued to deteriorate, Colorado added six more counties to its drought watch, bringing to 40 out of 64 statewide the number of counties still battling dry conditions.

The drought plan remains in effect, Finnessey said, with officials waiting to see what 2019’s spring storms may deliver.

“Right now we’re getting mixed signals,” said Peter Goble, a drought specialist with Colorado State University’s Colorado Climate Center. “2018 told us a clear story. Water year 2019 has yet to reveal its true form,” he said. The water year begins Nov. 1 and runs through Oct. 31. It is the standard unit of time scientists and meteorologists use to measure precipitation.

The Arkansas River Basin, which includes Colorado Springs, Pueblo and La Junta, has the best snowpack in the state right now at 129 percent of average.

The South Platte River Basin, which includes the metro area and Fort Collins, came in second with a snowpack of 113 percent of average. 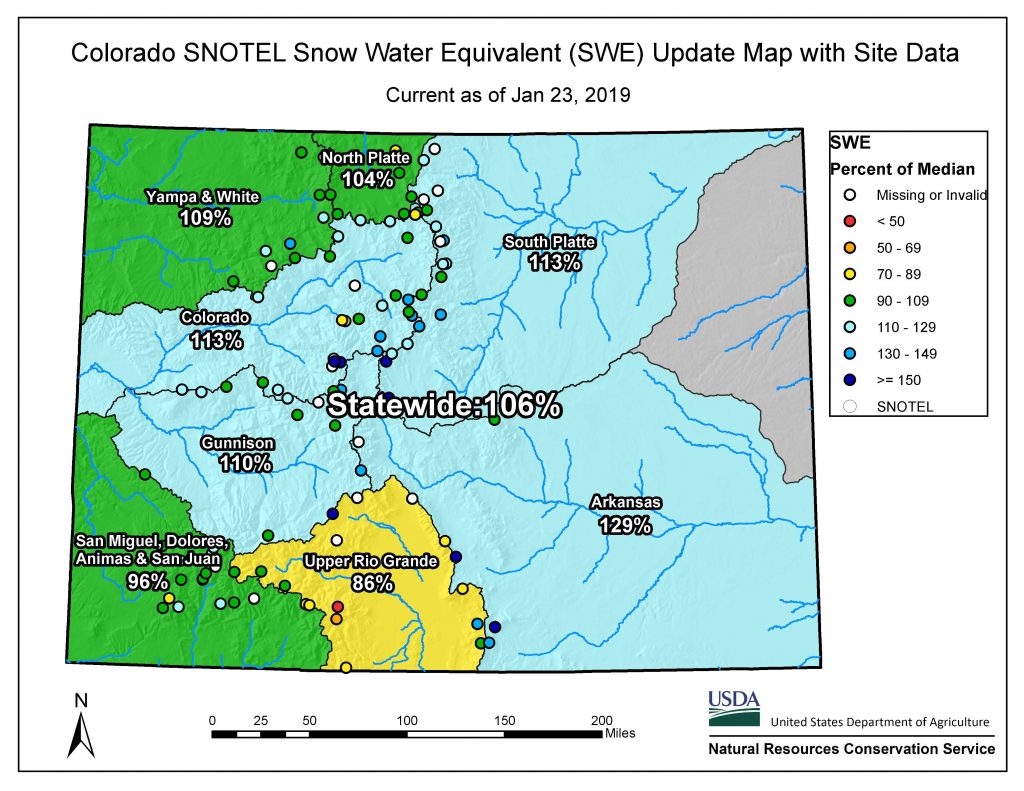 But in keeping with the winter’s wild cards, the Front Range actually slipped into short-term drought mode in December, after several weeks went by with no snow.

In response, Highlands Ranch customers turned on their sprinkler systems to provide relief to dry lawns and trees, driving demand up 3 percent from where it was last year at this time.

“There is some concern here,” said Swithin Dick, a water resources staffer at Centennial Water and Sanitation District, which serves Highlands Ranch.

Though Colorado and other states are seeing some drought relief, there is growing alarm that conditions in the broader, seven-state Colorado River Basin will not improve significantly this year, due again to ultra dry soil conditions throughout the basin.

New reports indicate that Lake Powell and Lake Mead, both of which are less than half full, will fall to a crisis point this year, likely triggering major water cutbacks in Arizona, Nevada and possibly California.

Colorado’s snowpack is projected to peak around April 8, at which point water managers will begin to make final projections for this year’s runoff. The next task force meeting is scheduled for Feb. 19 in Denver.