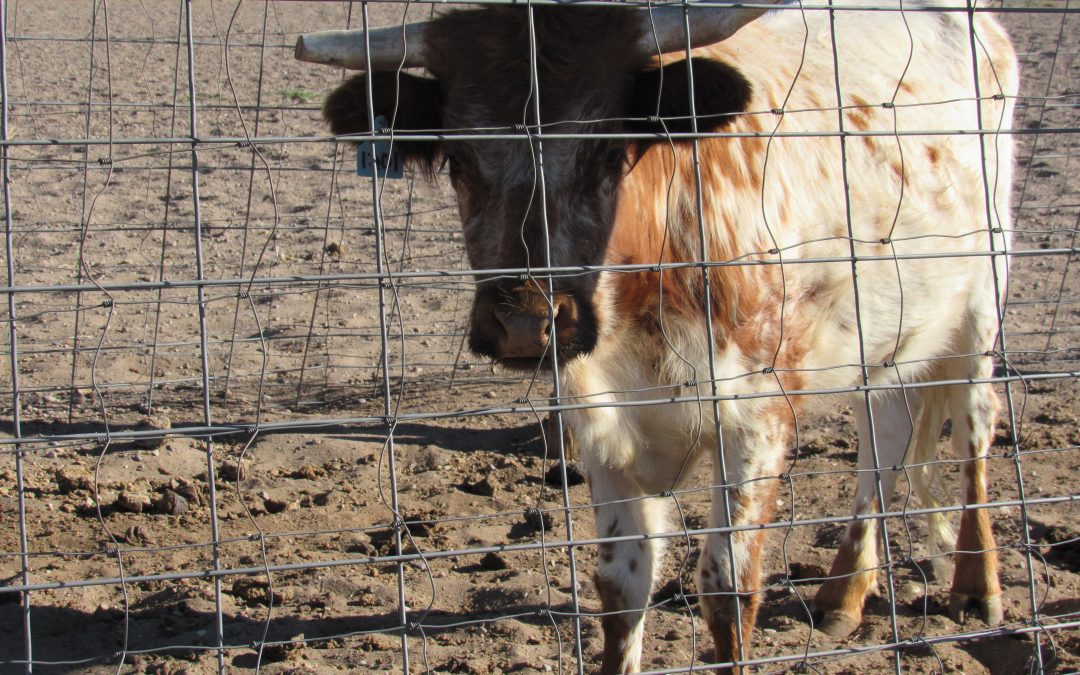 A calf on a farm in the Rio Grande Basin. Credit: Jerd Smith

As the climate warms, ranchers are preparing to execute on a series of tough tasks — using their water supplies more efficiently, raising healthy livestock without overgrazing dry pastures, and producing enough food to feed the planet.

“Loss in forage and loss in production create a large-scale and fundamental change to the future of agriculture in Colorado,” says Terry Fankhauser, executive vice president of the Colorado Cattlemen’s Association. “It has been very devastating to some people, and to others it has been quite expensive.”

Like most industries, livestock production contributes to climate change. In the U.S., the agricultural sector contributed 8.4 percent of total greenhouse gas emissions in 2017 according to the U.S. Environmental Protection Agency.

Livestock are responsible for more than half of that, thanks in large part to the methane they release as they digest food.

While they have an impact on emissions, ranchers and their livestock will also be the victims of climate change, just like everyone else. A hotter climate will take a toll on vulnerable animals, ranchers, and their market.

Cattle and sheep graze on rain-fed forage grasses on Colorado’s plains and in the mountains. Very little of this land is irrigated—and even if it were, the state’s irrigation water comes from diminishing mountain snowpack which was down 33 percent in spring 2018. That means when Colorado is in a drought, there’s less natural food available for livestock. To compensate, ranchers have the choice of either running fewer animals on their land, or subsidizing natural forage with hay from the market. However, both of these options affect the bottom line, making them short-term solutions, untenable in the long-term.

In a 2016 article in the publication Colorado Water, Reagan Waskom, director of the Colorado Water Institute, predicted that warmer winter temperatures will improve the survival rates of newborn animals on the range. But in many situations that will mean less food will be available for cattle and sheep. At the same time, a warmer climate will bolster the invasion of weeds and woody plants on grazing lands, which are less tasty and more likely to create health problems for cattle, like lump jaw which arises from wounds inside the mouth and can cause animals to stop eating.

Ranchers, therefore, are planning carefully for the future. “We do see a lot of things changing in the industry,” says Fankhauser. Ranchers are making greater use of technology, investing in the genetic selection of animals able to perform at their full potential in harsher environments.

To increase climate resilience, ranchers are working to keep the rangelands healthy and not overgraze, says Brad Udall, a senior water and climate research scientist at the Colorado Water Institute. “It means using land efficiently when there is moisture, and staying off when there isn’t. It’s important to have stocking rates that make sense, and not try to get too much out of a piece of ground. Ranchers are smart. They know their livelihoods are dependent upon healthy rangelands.”

For consumers, the solution to reducing methane emissions is not necessarily to forego their omnivorous tendencies just yet, says Kate Greenberg, the Colorado Commissioner of Agriculture. “There is an incredible interdependence between humans, animals and the land that extends beyond methane emissions. Animals are integral to functioning ecosystems and natural cycles,” Greenberg says. “Many ranchers are experimenting with practices that increase the regenerative capacity of the land and the resilience of their operation. Eaters are a part of this work. This is a good chance to get to know your local rancher and help ensure we can keep up a secure food supply in a more uncertain future.”

An earlier version of this article first appeared in Headwaters magazine’s Spring 2019 issue.