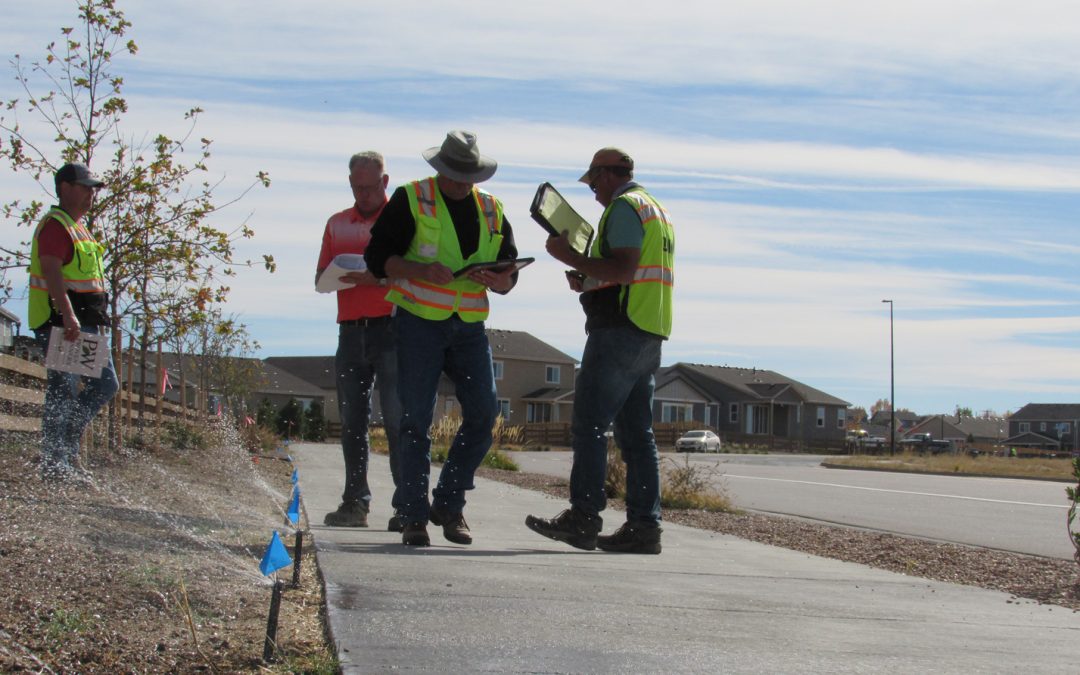 Two of Colorado’s fastest-growing towns are suing the state over rules used to manage vast quantities of water that lie underground, saying that if the state moves forward with a new permitting requirement it could sharply limit their future water supplies.

Experts say the lawsuit, filed 14 months ago by Parker Water and Sanitation District and joined by Castle Rock, could dramatically change the way underground aquifers containing millions of acre-feet of water are managed and could also impact future water supplies for dozens of Front Range communities.

At issue is whether a 1985 state law regulates only the rate at which wells are pumped or whether the state can also limit the total volume of water pumped. Under what’s known as the 100-year rule, well owners in the Denver Basin aquifers, which underlie much of the Front Range and Eastern Plains, can pump 1% of the water estimated to be under their land annually for 100 years. The law applies to aquifers known as “non-tributary,” meaning they do not receive any natural recharge from snow and rain and are also not connected in any way to rivers. 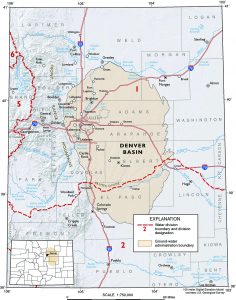 Water stored in Colorado’s Denver Basin aquifers, which extend from Greeley to Colorado Springs, and from Golden to the Eastern Plains near Limon, does not naturally recharge from rain and snow and is therefore carefully regulated. Courtesy U.S. Geological Survey.

Last March, as part of what it describes as an administrative effort to ensure wells across the state are regulated in a uniform way, the Colorado Division of Water Resources also began including the total amount of water a Denver Basin aquifer well permit holder was entitled to pump during the lifetime of the well permit.

“Not only is there an annual maximum, but we also interpreted the law to mean that you are limited to the total amount of water under your property,” said Tracy Kosloff, deputy state engineer at the Colorado Division of Water Resources.

Parker Water and Sanitation District objected, saying that placing a lifetime limit on the total volume of water available to withdraw would improperly limit their water supplies, violating their property rights.

At the same time Greeley and Aurora have also joined the legal battle, saying they support the state’s effort to more closely manage underground supplies by including a specific volume on permits because it will better protect everyone over the long run.

Parker and other Douglas County entities declined to comment on the suit, but in its court filing Parker described the state’s efforts as “arbitrary and capricious.”

The Denver Basin aquifers once served as a plentiful, pure and inexpensive water source for fast-growing Douglas County communities and others. Instead of buying expensive water rights in nearby rivers and streams, and building dams and reservoirs to store that water, developers could simply obtain a permit and drill a well.

For years the aquifers had been accessed largely by individual homeowners and ranchers. But as growth took off in the 1970s, Parker, Castle Rock and others began drilling new high-powered wells, capable of pumping 1,000 gallons a minute, deep into the aquifers.

Water in aquifers is often under intense pressure and when wells are drilled, pressure is released, allowing the water to rise quickly to the surface. But eventually, the pressure subsides and the water no longer rises naturally, meaning electricity has to be used to draw the water to the surface. And as the water is pumped, because there is no natural recharge, the water table gets lower and lower, requiring that expensive new wells be drilled deeper to maintain water supplies.

By the 1980s it was clear the aquifers were in decline, and in 1985 the state imposed the 100-year rule and began monitoring aquifer levels and calculating how much was contained in the four geographic formations that comprise the Denver Basin. But back then there was little money to do the detailed, widespread mapping and hydrological studies needed to pinpoint how much water lay under each entity’s land holdings.

Since then more wells have been drilled, and the aquifers are being used heavily not just for water supply, but also for water storage. Cities such as Highlands Ranch, Parker and others have implemented sophisticated programs that put surface water back into the aquifer, using it like a savings account which can be accessed in drought years.

It is this banked water that the state, and Greeley and others, want to protect.

And that’s not an easy task, because these non-tributary aquifers have widely different geologic formations including sand, silt and bedrock, which allow water to freely move from one place to another, making it difficult to track.

“The water in the Denver Basin aquifers isn’t static, like an ice cube in a tray. It’s a leaky ice cube tray,” said Kosloff.

Sean Chambers, director of the Greeley Water and Sewer Department, said his concern is that allowing Parker and Castle Rock to pump without an overall volume limit could mean that water he and other cities are injecting into the ground is unknowingly extracted, harming their own supplies. Greeley has begun an ambitious groundwater supply program with its purchase last year of the Terry Ranch. Chambers said it is critical that the aquifers are closely monitored and managed to ensure everyone’s water supplies are protected.

“You shouldn’t be allowed to pump water from someone else’s property,” Chambers said.

Ralf Topper is a groundwater expert who formerly oversaw the state’s groundwater programs at the Division of Water Resources. Though Parker, Castle Rock and other communities have done a good job of regulating their non-renewable aquifer supplies and slowing the aquifers’ declines, interference between wells in urban areas is becoming more of an issue, Topper said.

Topper and other experts say the issue will only be resolved when more sophisticated aquifer management tools are implemented, including thousands of new site-specific water studies, underground mapping, and public processes to ensure other water users aren’t injured by over-pumping.

“Our fundamental concern is that we want science-based, data-driven analysis of all non-tributary aquifer determinations. Lastly, we want to be sure if an aquifer is deemed non-tributary it is deemed as such by a scientific analysis that is subject to a public hearing and appeals process,” he said.

Topper and others have questioned whether existing state law gives water regulators the authority to make this change and that is something the court is examining now.

Parker, Castle Rock and other water districts in Douglas and Arapahoe counties have dramatically reduced their use of groundwater and they intend to continue weaning themselves off the aquifers. But they still want to protect their rights to the ground water because the aquifers are the best tool they have to protect against future droughts.

“The imposition of this condition … is a denial of a statutory right, is contrary to a constitutional right, and is a clearly unwarranted exercise [of the state engineer’s] discretion,” Parker said in its court filing.

How quickly the court will decide the case isn’t clear yet. Still, said Deputy Engineer Kosloff, “It’s good for us to understand sooner rather than later so we can all plan for that.”