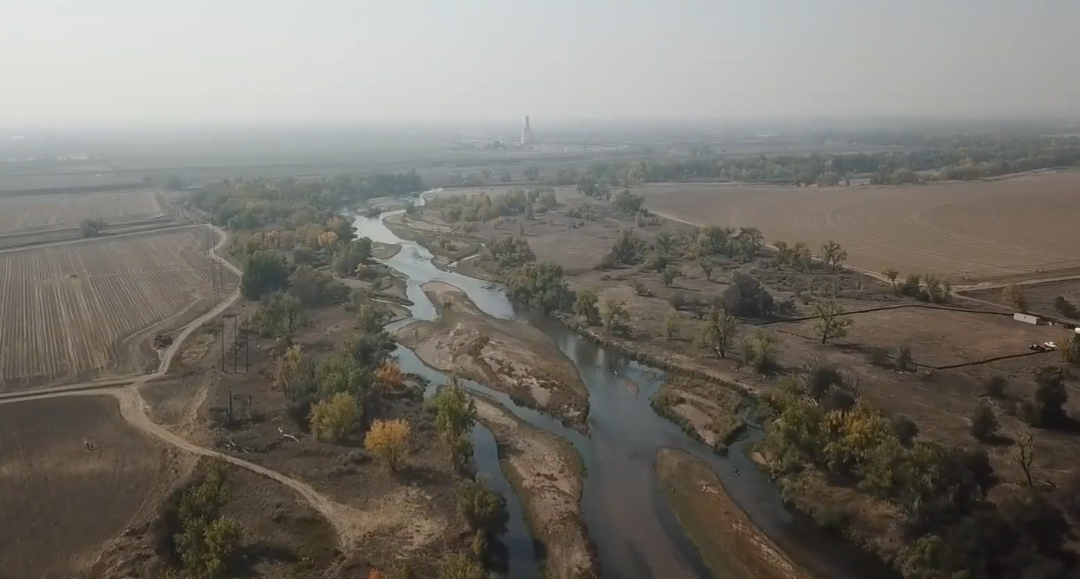 Here at the confluence of the Big Thompson and South Platte rivers near Greeley, a new conservation effort is underway. It restores wetlands and creates mitigation credits that developers can buy to meet their obligations under the federal Clean Water Act to offset any damage to rivers and wetlands they have caused. Credit: Westervelt Ecological Services

Developers often dropped by unannounced at the Allely farm to ask if the family would consider selling their 70-acre property south of Greeley at the confluence of the Big Thompson and South Platte rivers. The answer was always no — the Allelys did not want their land, which had been in the family since in the early 1960s, to be developed, now or in the future.

So when staff from Westervelt Ecological Services first approached the Allelys about creating a habitat preservation program on their farm roughly three years ago, the family was skeptical. But over the course of many months and long conversations, they began to warm to the idea and eventually agreed.

Instead of selling their property to the highest bidder or leaving it to the next generation, the family established a conservation easement — a permanent agreement to never develop the land — and, for a fee, allowed Westervelt to create the new Big Thompson confluence mitigation bank. The project broke ground in late October.

Now, a developer who disrupts wetlands or streams elsewhere along the Front Range and in parts of eastern Colorado can offset that impact by buying credits generated from floodplain and ecosystem restoration work completed on the Allelys’ land. Purchasing credits from this new mitigation bank allows developers to meet their obligations under the federal Clean Water Act.

“It’s a very important piece of property to us as a family,” said Zach Allely, the fifth-oldest of the six children who grew up on the farm. “If there’s an opportunity for us to say, ‘No, this is a place where native fauna, native flora can thrive forever,’ we’ll take that.”

Mitigation banks are not new in Colorado — there are some 21 pending, approved, sold-out or suspended throughout the state, according to the U.S. Army Corps of Engineers’ database — but this is the first new mitigation bank approved on the Front Range in 20 years.

Across the country, mitigation banks have become more popular since 2008, when the U.S. Environmental Protection Agency and the U.S. Army Corps of Engineers expressed a preference for mitigation banks (over other types of mitigation) and offered clearer guidance, standards and timelines for these projects.

Mitigation banks like this one are a byproduct of the federal Clean Water Act, first enacted in 1948 as the Federal Water Pollution Control Act and then expanded and reorganized in 1972. More specifically, they relate to Section 404 of the act, which aims to protect the country’s wetlands from the discharge of dredged or fill materials during the construction of dams, levees, highways, airports and other development projects.

Under Section 404, developers must take steps to avoid and minimize damage to wetlands and streams by adjusting the scope, location, design and type of project they wish to undertake. After avoidance and minimization, they must turn to a third mitigation type: compensatory mitigation.

Under compensatory mitigation, developers can restore, establish, enhance or preserve wetlands at the project site or somewhere else nearby. But this type of work isn’t always practical or possible, which is where mitigation banks come into play. Instead of going to all that trouble, a developer can pay for someone else to do the heavy lifting at a different, nearby location.

A mitigation banker, in this case Westervelt, pays for the upfront costs of finding a suitable piece of land, gaining approval from the right regulatory agencies, and doing the actual mitigation work. Then, depending on the scope and size of the project, the banker can sell a certain number of credits to offset the impacts of future development within the bank’s general vicinity.

Today, crews are hard at work on the Allely property, re-establishing the historical floodplain to help restore the ecosystem for plants and animals and improve flood resiliency for nearby communities.

This restoration work also creates 34.76 wetland credits and 460 stream credits — released in phases — that developers, public agencies, mining companies and others can buy to help mitigate the unavoidable damage their projects will cause to other Colorado wetlands and streams.

Lucy Harrington, the Rocky Mountain region director for Westervelt Ecological Services, declined to say how much the company is charging for credits from the new 72.4-acre bank, citing variable pricing and bulk discounts.

But the Colorado Department of Transportation, which regularly buys credits from mitigation banks across the state, recently paid $200,000 for a credit from the new bank to help offset the impact of its Central 70 highway improvement project, said Becky Pierce, CDOT’s wetlands program manager.

The company, which opened its newest regional office in Centennial in 2016, also looks at community-identified areas for wetland restoration and conservation, as was the case with the new Big Thompson confluence bank. Westervelt staff worked with the Middle South Platte River Alliance to understand local priorities and identify possible sites for the new bank. The alliance helped introduce Westervelt to the Allely family.

“It’s really a confluence of technical work, relationship-building and a little bit of luck, to be perfectly honest,” Harrington said.

Westervelt and other mitigation bankers often buy property outright. But in this case, Westervelt paid the Allely family an undisclosed amount to use their land for the mitigation bank and, in return, the Allelys protected the property in perpetuity with a conservation easement, which comes with its own tax benefits and incentives. Westervelt and the Allelys also established a long-term endowment for the site’s management with the National Fish and Wildlife Foundation.

After creating a detailed plan and getting approval from regulatory agencies like the U.S. Army Corps of Engineers, U.S. Fish and Wildlife Service, Colorado Parks and Wildlife and others, Westervelt began work.

The company has released its first round of credits, which includes 8.69 wetland acres and 115 functional feet of stream credits. So far, the company has sold more than half of the wetland credits, Harrington said.

“Any project, whether it’s a highway widening that may cross a river, home development that may affect ephemeral or perennial drainage, a Walmart parking lot that’s expanding, a pipeline going in, any of those development items that could impact wetlands and streams, instead of having to provide a wetland offset themselves can just come to us, write a check and just walk away,” Harrington said. “We take on all the liability of the site in perpetuity.”

Meanwhile, the Allely family knows that their property will never be developed and is instead being restored to its historical conditions. They can also still access the land under the conservation easement, which is held by the nonprofit land trust Colorado Open Lands.

Staff at Colorado Open Lands say they hope the success of the Big Thompson mitigation bank will inspire other landowners to conserve their land.

“It’s just another tool, another way for us to look at getting creative about protecting open space in Colorado,” said Carmen Farmer, conservation project manager with Colorado Open Lands. “Traditionally, we protect land throughout the state using state tax credits and federal tax deductions and incentives. Sometimes the traditional model doesn’t necessarily pencil out for landowners. This is another way for us to go about incentivizing landowners to help protect their properties and make sure they’re compensated for doing so.”

Sarah Kuta is a freelance writer based in Longmont, Colorado. She can be reached at sarahkuta@gmail.com