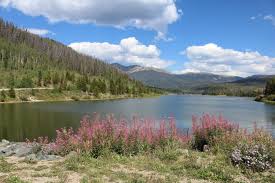 In the midst of the coronavirus pandemic and with a recession looming, two Colorado water districts will ask voters this November to approve property tax increases for millions of dollars in new funding for water education, water quality improvement, infrastructure and water use management.

The St. Vrain and Left Hand Water Conservancy District, made up primarily of Boulder County, is asking voters for more money for the first time in 50 years. Similarly, the 15-county Colorado River Water Conservation District in western Colorado is also going to the polls to ask for more funding.

Historically, funding for water has been hard to come by in Colorado, with voters reluctant to help pay for a statewide water program. But these two districts are hoping for more success at the local level, where voters can more easily see and feel the direct impact of their dollars on local watersheds.

“Whether your relationship with water is limited to water that comes out of your kitchen faucet, or you’re a rafter or kayaker, or a farmer or rancher, or somebody who works in mining and energy production, we all need a secure water supply,” said Andy Mueller, general manager of the Colorado River District. “These efforts that we’re talking about are vitally important to securing that water supply for the next 50 years. And if we don’t do this, our kids will not have the same quality of life.”

Both districts are grappling with a confluence of social and economic pressures: the ongoing drought in Colorado and the West, a rapidly growing population, increased demand for water, declining oil and gas revenue, and declining property tax levels under the state’s Gallagher Amendment.

Both are also hoping to leverage the new property tax revenue to access additional state, federal and private money for water projects.

“It allows us a driver’s seat at the table rather than a passenger seat,” said Mueller.

The Colorado River District will ask voters to increase the mill levy from 0.252 mills to 0.5 mills, which would generate an additional $4.9 million per year starting in 2021. Under the proposal, the district’s taxpayer-funded budget would more than double from its current $4.5 million level.

The district, home to some 500,000 residents in an area that covers 28 percent of the state, encompasses the Colorado River and its major tributaries, including the Yampa, the White, the Gunnison and the Uncompahgre rivers.

The district, which has 22 employees, plans to use the extra money to help fund projects and initiatives within its top priority areas: productive agriculture, infrastructure, healthy rivers, watershed health and water quality, and conservation and efficiency. No new staff positions will be created if voters approve the increase.

Already, the district has tightened its expenses as much as possible, Mueller said, but projections show cuts alone won’t be enough. The district’s board members, who have varied political leanings, thought long and hard before deciding to move forward with the ballot question.

“This is essentially government closest to the people,” said Dave Merritt, the district’s board president. “This protects western Colorado water, for use in western Colorado, and gives us the ability to bring some money to bear or some water to bear when we need to solve problems.”

If voters agree to the proposed property tax increase, they’ll send an extra $3.3 million to the district each year starting in 2021. For comparison, the current mill levy generates $416,000 annually. (The district’s budget also includes an enterprise fund that generates between $100,000 and $150,000 per year, Cronin said.) The tax would add $9 to the annual property tax bill for a $100,000 home.

The tax increase would be used for projects that support the district’s five main goals, which were outlined in a strategic plan the board approved in January: the protection of water quality and water supply, infrastructure for agricultural water use, water education, creek improvement facilities and conservation.

It’s a historic decision to ask voters for more money: The district has not asked for a property tax increase since its founding in 1971, nearly 50 years ago.

“It’s been an evolution, this isn’t a sudden thing,” said Dennis Yanchunas, the district’s board president. “We believe [the strategic plan] is what our citizens are looking for from the district, and we can provide that leadership. In order to do that, you also have to have the kind of financial base that puts you in a position to do projects and make significant contributions.”

The district’s board members initially discussed asking voters for an even larger tax increase to 1.5 mills, but ultimately decided on the more conservative proposal. The board also added a 10-year sunset clause to help make the idea more palatable.

“There was very much a concern and a discussion around, ‘What’s the potential economic climate in November?’” said Cronin.

Indeed, the board considered the appropriateness of asking voters for a tax increase at all. Ultimately, however, they decided there’s no time like the present.

“I’m not sure that there is ever a good time to ask somebody for more money,” said Yanchunas. “There’s an awful lot of stuff we just have to set aside and say, ‘We have the right plan, we have a mission we believe in and we think the citizens believe in.’”