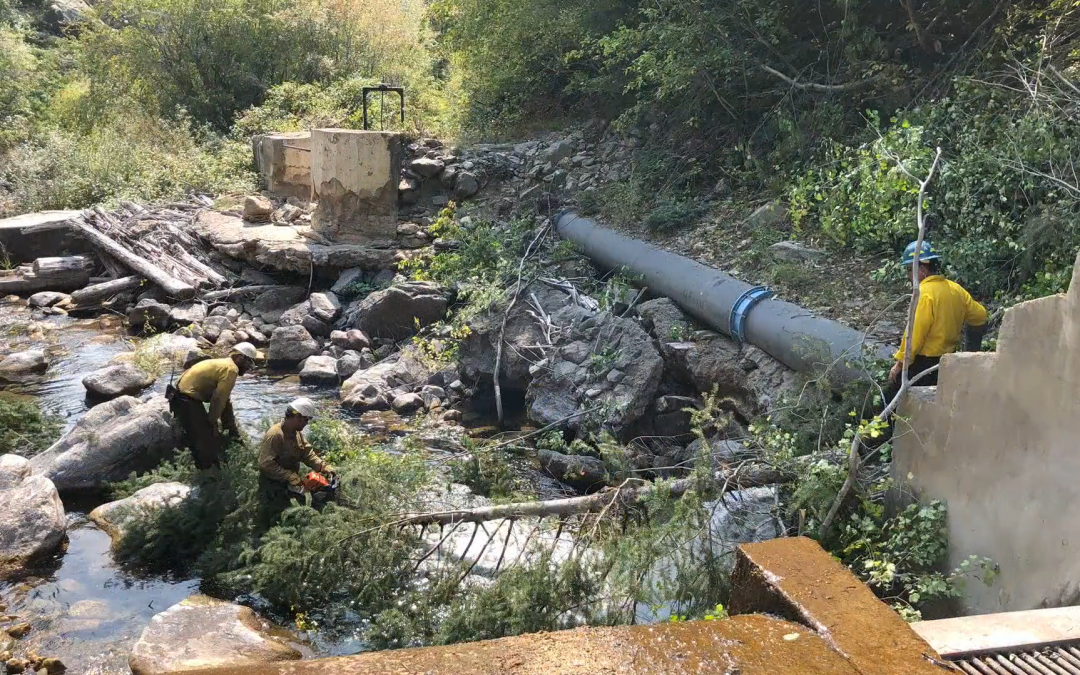 Firefighters clear debris around a water diversion structure in the White River National Forest as part of an effort to protect it from the Grizzly Creek Fire in 2020. Courtesy, City of Glenwood Springs.

Because the federal government owns vast swaths of land across the West, expanding shared stewardship programs, building in more flexibility to distribute more cash in new ways, and creating a new “green” timber industry to help thin ailing forests and reduce wildfire risk are all needed quickly, according to Colorado Gov. Jared Polis, who addressed a roundtable meeting with U.S. Secretary of Agriculture Tom Vilsack.

“With the federal government owning a big part of our state, it’s a shared responsibility to address forest health and fire mitigation,” Polis said. “Shared stewardship agreements are a valuable tool. But these need to be reimagined and re-upped given this new normal.”

The federal government owns roughly 30 percent of Colorado’s land and even more in other states, such as Idaho and Montana.

Thinning forests and protecting mountain watersheds is an often daunting, cross-boundary exercise between the U.S. Forest Service, the U.S. Bureau of Land Management, and state and local agencies.

Congress has been working on a massive infrastructure bill that has some bipartisan support and which will, if approved later this year, provide millions of dollars in new spending for roads, bridges and rural broadband networks, and may also include new funding to help deal with the devastation from wildfires across the West.

Governors made clear to federal leaders that forest health needs to be included in that definition of infrastructure, in part because of its importance to the West’s water supplies. In Colorado, for instance, approximately 80 percent of the drinking water for all residents flows off of forested watersheds.

“We have to have more treatment and to do that we will need more resources,” said Idaho Gov. Brad Little. “Hopefully we can get Congress to understand that as they are working on infrastructure [funding] for bridges and roads, we need to invest in our forests as well.”

Vilsack told governors he was hopeful that the new infrastructure bill as well as other federal legislation, such as the Great American Outdoors Act, would deliver funding and new programs that would help the West cope with a warming climate, water shortages and more frequent wildfires.

“We’re aware of the fire issue and we know the importance of having additional money on the treatment side, as well as ways to create more markets for the wood we produce [when forests are thinned],” Vilsack said.

“But I see a lot of opportunity, especially if we innovate and create voluntary programs and encourage people to take advantage of the income crops that are going to be created,” Vilsack said.