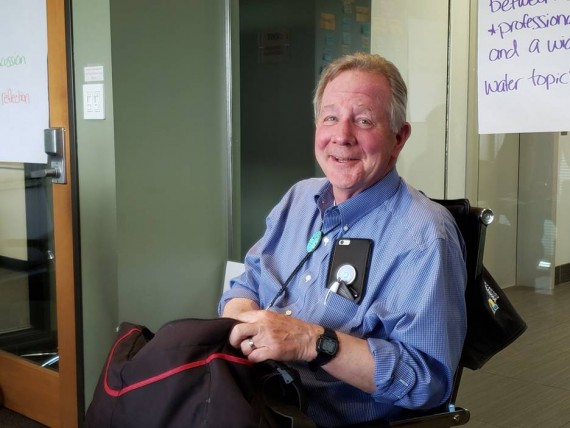 The Colorado water community lost a legend with the passing of Justice Greg Hobbs. Greg, who would have turned 77 on Dec. 15, passed away peacefully with his family – wife Bobbie, son Dan and daughter Emily – by his side on November 30, 2021.

For both the legal and water communities, and really all whose paths crossed his, the loss is heartbreaking. We not only lost one of our most knowledgeable legal minds, but also lost one of our most able and accomplished speakers, teachers, writers and historians. Those who knew Greg understand.

Greg, who first began practicing law in Colorado in 1973, retired as a Colorado Supreme Court Justice in 2015 and continued to share his water expertise and speaking and writing eloquence in a variety of ways.

He was the longstanding Vice-President of Water Education Colorado, an organization he helped create in 2002 and for which he was a tireless advocate and ambassador. For the past 19 years, he served as WEco’s Publications Chair, where he oversaw the publication of its well-known Headwaters magazine and Citizen’s Guide series. He was known to greet each new publication with a celebratory, “This is our best issue yet,” and was always championing the publications’ distribution, even toting boxes around in his trunk so that they were always at the ready. He was also a frequent presenter in WEco programs, mentored numerous individuals through the Water Leaders Program, and provided sound guidance in the organization’s strategic growth and evolution over the years to ensure it stayed true to its nonpartisan mission.

In recent years Greg served as a senior water judge working as a mediator for water rights cases and continued to mentor current and future water lawyers with his knowledge of the legal nuances of Colorado’s water rights system. He taught a water court practice seminar and continued to write and speak about all matters water.

Greg wrote extensively, whether about the legal intricacies of water or his beloved poetry. He authored a number of books, the most recent of which was published in 2020 entitled Confluence: The Story of Greeley Water, which he co-authored with Michael Welsh.

During his nearly two decades on the bench, he authored more than 250 majority opinions, many of which dealt with water law. He was an exceptional jurist, principled and deliberate, noting that every word in every opinion mattered. As a perfect reflection of his generous spirit, he hired nearly 60 law clerks over his time on the bench, and ensured that they all knew each other, supported each other professionally, and treated each other like family. He always talked about how proud he was of his clerks and where they are now, many of whom, like him chose careers as public servants.

Greg’s early legal career included stops with the U.S. Environmental Protection Agency, where he worked for two years beginning in 1973, followed by nearly four years with the Colorado Attorney General’s Office in the Natural Resources Section, where he became a leader in environmental law specializing in air and water quality issues.

In 1979, he became a partner with Davis, Graham and Stubbs and soon after the principal counsel for the Northern Colorado Water Conservancy District, where he became well-known for his advocacy and protection of Northern Water’s water rights. In 1992, he helped form the law firm of Hobbs, Trout and Raley with two other well-known water lawyers – Bob Trout and Bennett Raley.

In 1996, Gov. Roy Romer appointed him to the Colorado Supreme Court where he took his water knowledge to an even higher level. Greg was a staunch supporter of Colorado’s system of water rights and wrote extensively and spoke often of his support for the unique water law system that has evolved since the state was created in 1876. He had a studied and nuanced approach to the prior appropriation system and defended it against those who felt it no longer suited Colorado.

Greg did his undergraduate studies at the University of Notre Dame. After Notre Dame, he attended Columbia University to study Latin American history. Following their 1967 wedding, Greg and Bobbie joined the Peace Corps, moving to Colombia. The couple returned in 1968 and had Dan. Emily followed in 1971.

Greg spent his early years of family life in law school at Berkeley Law, completing his degree in 1971. He then clerked for Judge William Edward Doyle of the Tenth Circuit Court of Appeals in Denver, a critical part of his career and his interest in the bench. In 1973, the Hobbs family returned to Denver and made it their home for good.

There will be a celebration of Greg’s life at a later, more COVID-safe time. The family asks that in lieu of flowers donations be made to Water Education Colorado. You can donate in Greg’s memory online at wateredco.org/greg-hobbs-memoriam.

Or, mail a check with your donation to:
Water Education Colorado
1600 N Downing St., Suite 200
Denver, CO 80218
Please include Greg’s name in the check memo line.

Written by Brian Werner, Amy Beatie and Jayla Poppleton, on behalf of the Hobbs Family

Click the button below if you wish to make a donation in Greg’s memory.

Greg was a celebrated water poet, and it was his desire to share the 218 poems in Colorado Mother of Rivers with the community. Read the poems or download a copy using the button below.