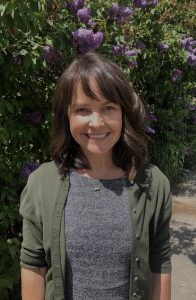 When a younger Kelly Romero-Heaney headed east to attend Middlebury College to study English, she imagined a future as a professional poet. Fortunately for the Colorado water community, she was deflected from her path to becoming Poet Laureate when she heard pioneering environmentalist David Brower deliver a “fire and brimstone speech” about protecting rivers in the Western United States. This ignited her passion to do her part to protect natural resources and inspired her to shift her studies, earning a B.S. in environmental geology from the University of Montana and an M.S. in Environmental Science and Policy from Johns Hopkins University.

Degrees in hand, she returned to Colorado, where seven generations of her family have “lived a good life as miners, doctors, nurses, engineers, journalists, builders, astronauts and more and helped to make Colorado what it is today.”

Kelly exercised her knowledge of watershed health as a hydrologic technician for the U.S. Forest Service in Routt County, where Liz Schnackenberg served as a significant mentor, and where she experienced the impacts of the unprecedented (at that time) fire season of 2002.

In 2014, Kelly accepted the position of Water Resources Manager for the City of Steamboat Springs, where she managed a myriad of issues for the city, including long-term water planning, source water protection, and wastewater issues.

During her involvement in celebrating Colorado’s “Water 2012,” a statewide public awareness campaign celebrating a “year of water” in 2012, she became aware of the many programs and products offered by Water Education Colorado and subsequently enrolled in WEco’s 2016 Water Leaders Program.

“The Water Leaders Program taught us about the emerging, more collaborative approach to water leadership, and helped us know how to enter that space and maintain respectful relationships,” says Kelly. She considers the program a highlight in her professional development.

Applying that collaborative mindset (and skillset), in 2019 Kelly teamed up with The Nature Conservancy to convene stakeholders across the Yampa Basin to launch the Yampa River Fund, a $4.8 million endowment that will support streamflow and riparian restoration and water infrastructure projects aimed at benefitting the environment, recreation and agriculture. Already the fund has supported streamflow releases from Stagecoach and Elkhead Reservoirs, the planting of cottonwood forests along the Yampa, a whitewater recreation park in the City of Craig, and improvements to a major agricultural diversion in Maybell. She would like to see the water fund tool replicated in other river basins in Colorado.

Actualizing her growing aspiration to influence water on a statewide level, in June 2021, Kelly took on a new role as Assistant Director for Water Policy at the Department of Natural Resources, where she will get to convene “some of the brightest minds and most dedicated professionals of natural resources management to create solutions to our water challenges.” She ticks off a substantial list of “wicked water problems,” from wildfire risk to ecological degradation, population growth, regional scarcity and climate change, on which she will be advising DNR Executive Director Dan Gibbs and others on the Executive Director’s Office team. In conducting her work, she is committed to providing “a safe space for information sharing and debate both within and outside of DNR and its divisions,” in a way that doesn’t leave “any social or intellectual capital untapped.”

Having spent time serving on both the Yampa/White/Green Basin Roundtable and as its Public Education Participation and Outreach (PEPO) liaison, she is a firm believer in the “Basin Roundtable experiment” and will support the CWCB in ensuring the 2022 Colorado Water Plan update captures “the ideas and consensus positions of the Roundtables and the people and organizations that engage with them.”

She’ll also be focusing on devising ways to incentivize the protection of riparian corridors and the ecosystem services they provide, and emphasizes that these incentives could bring resources to ranchers and farmers while promoting conservation of important habitat.

Now a considerable influencer in her own right, she is quick to credit other mentors, including Yampa Valley rancher Jay Fetcher and Steamboat Springs Public Works Director Jon Snyder.

As she transitions to wearing a statewide hat, she reflects on the issues facing her local community, where she has invested so much, for so long: “With all the layers of what climate change means, dealing with fire for at least a generation, and integrating newcomers into who we are in Steamboat, I’m hopeful our community can be adaptable and gritty to meet these challenges.”

A self-avowed “card-carrying Mountain Woman,” Kelly can be found (in her SPARE time?) engaged in one outdoor activity or another with husband Geovanny Romero (“He is such a star!”) and sons Luke and Nico. She is also known as the “Garlic Farmer” of Steamboat and bakes a mean blueberry sour cream pie.

It is not at all surprising to find a water professional applying such a wildly diverse set of skills and experiences to her work as a true water leader. As Kelly says, “No matter how difficult a water issue may be, it’s surprising how much better the conversation goes with pie on the table.”

That’s precisely what an adaptable and gritty water leader would say!