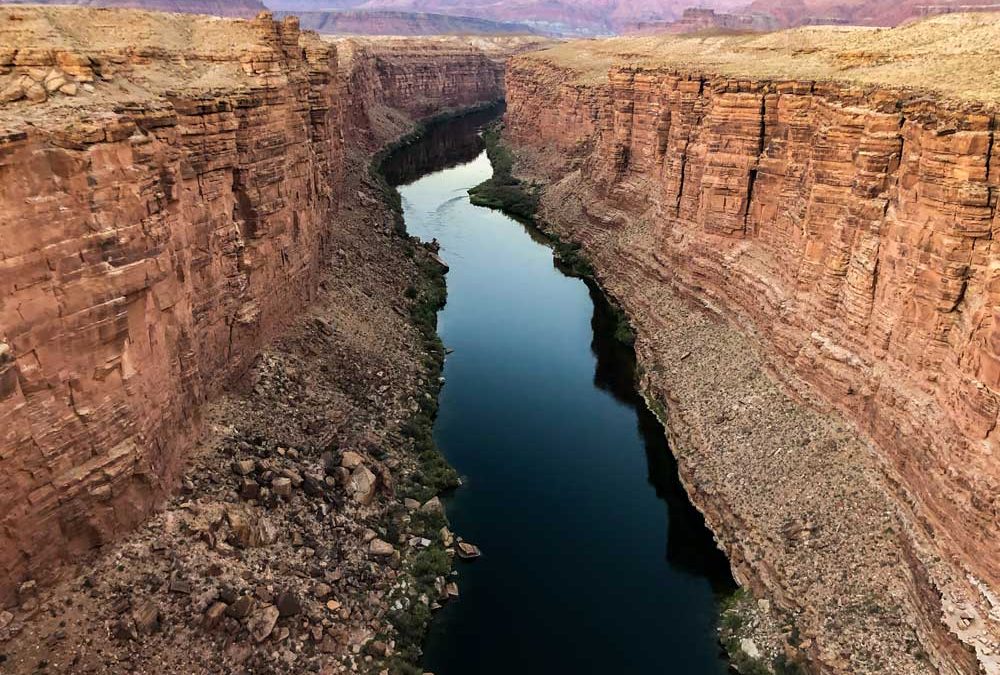 A tranquil stretch of the Colorado River near the Navajo Bridge in Marble Canyon, Arizona. The river supplies water to 40 million people across seven western states and is used to irrigate 5.5 million acres of land for agricultural uses. Photo credit: Denver Water.

Conditions in the Colorado River Basin continue to deteriorate, as long-term drought, drying soils and a changing climate combine to leave the river and its reservoirs short of the water that makes the seven states in the basin run.

The latest sign came Aug. 16, when the U.S. Bureau of Reclamation declared its first-ever water “shortage” due to declining  reservoir conditions at Lake Mead and Lake Powell — the two massive reservoirs along the Colorado River.

Explore some of the background leading up to the U.S. Bureau of Reclamation’s recent “shortage” declaration in this TAP story.

In 2021, spring runoff into Lake Powell was just 26% of average and the Colorado River Basin has seen above-average snowpack in only five years since 2000. 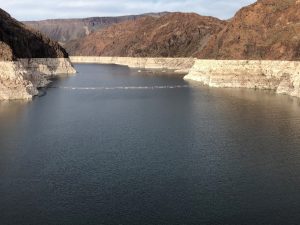 Lake Mead along the border of Arizona and Nevada stands at 35% of capacity as of Aug. 19, 2021. The massive reservoir is down 16 feet from this time last year. Photo credit: Denver Water.

The declaration, for now, affects primarily the Lower Basin. It means Arizona, Nevada and Mexico will get less water from Lake Mead in 2022.

But the Upper Basin states of Colorado, New Mexico, Utah and Wyoming are paying close attention, as the fates of both basins are tied tightly together. 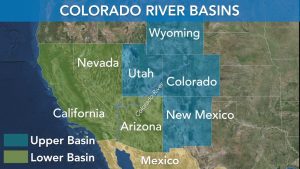 “The shortage declaration from the Bureau of Reclamation is yet another sign of the gravity of the situation on the Colorado River,” said Jim Lochhead, CEO/Manager for Denver Water.

“It’s critical for water users in Colorado and across the Upper Basin states to stay ahead of this through collaboration, continued investment and federal actions to increase climate resiliency, water efficiency and reuse.”

The crisis matters to Colorado and Denver Water customers, in short, because under a 1922 compact between states, the Upper Basin must send a set amount of water (7.5 million acre-feet, put simply) to the Lower Basin every year.

Water utilities and districts in seven states — including Denver Water — began planning in 2019 how to avoid shortfalls on the Colorado River that could threaten water supplies from the Front Range to Southern California. Learn about their efforts.

In addition, Denver Water gets half of its water supply from tributaries of the Colorado River.

Should conditions across the basin continue to suffer, that annual delivery marker could become harder to reach, and could potentially require water users in those states to leave more water in the river system to meet legal obligations downstream. 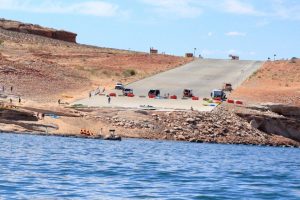 The Antelope Point boat ramp near Page, Arizona, is closed due to low water levels at Lake Powell. The reservoir was at 31% of capacity as of Aug. 19, 2021, with water levels down 52 feet from this time last year. Photo credit: National Park Service.

The situation has already affected the Upper Basin in another, direct way.

On July 16, in a move to address low inflows into Lake Powell, the Bureau began a program to release 181,000 acre-feet of water from federal reservoirs in the Upper Basin, including the Blue Mesa Reservoir near Gunnison.

That’s a lot of water. Consider Denver Water’s Dillon Reservoir in Summit County, which has a capacity of 257,000 acre-feet. If a release of water similar to that at Blue Mesa occurred at Dillon, the federal releases would be like draining nearly three-quarters of Dillon Reservoir. 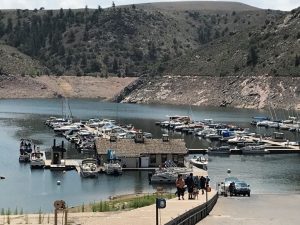 Denver Water remains deeply involved with officials in Colorado and across the Upper Basin to plan for a drier future.

“No one entity can solve this crisis alone,” Lochhead said.

“Continued collaboration with other water users in both the Upper and Lower basins, the seven states, the Upper Colorado River Commission and the Department of Interior is essential.”

For Denver Water, drought planning is embedded into the way the utility does business.

“Planning for the kind of conditions we’re seeing in the Colorado River Basin is part and parcel of our culture at Denver Water,” Lochhead said.

“We have a scenario planning approach that addresses a variety of situations out to 50 years. Our planning is reflected in our investments, and our investments are focused on resilience, sustainability, conservation and response.”

Read more about Denver Water’s connection to the Colorado River in these TAP stories and videos: 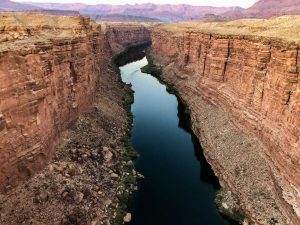 A tranquil stretch of the Colorado River near the Navajo Bridge in Marble Canyon, Arizona. The river supplies water to 40 million people across seven western states and is used to irrigate 5.5 million acres of land for agricultural uses. Photo credit: Denver Water. 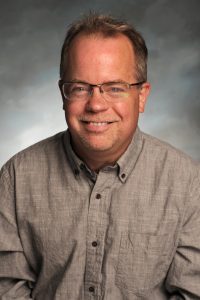 Todd Harman assists with media relations at Denver Water and is a staff writer for its TAP news site. Previously, Todd led communications for the Colorado Department of Natural Resources and conducted media relations for the Governor’s Energy Office under Gov. Bill Ritter. His work in public communications followed a 25-year career in print journalism in Colorado and Florida focused on environment, energy, government and politics.