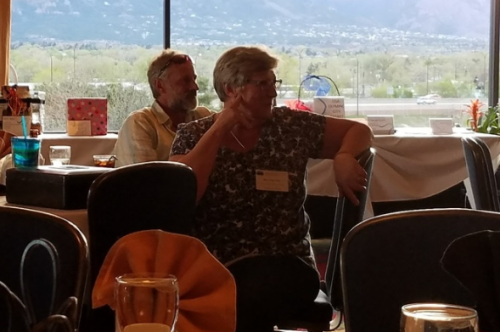 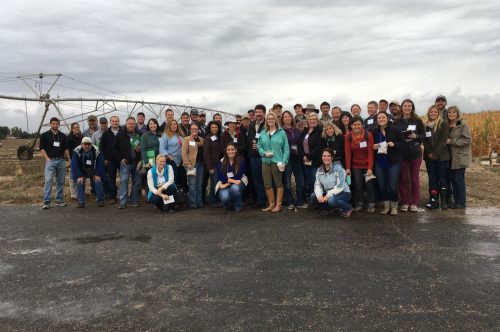 Name: Jean Van Pelt
Position: Arkansas Basin Roundtable – Public Education, Participation, and Outreach Workgroup (PEPO) Coordinator
Organization: Arkansas Basin Roundtable; PEPO
Became a WEN member: April 2016
Watershed: Arkansas Basin
From: Southern Colorado – Born in Walsenberg and grew up in Pueblo
Favorite Stretch of River: Along the [Arkansas River] up in Salida
Our Favorite Quote: “I’ve always been a firm believer that if you want to get buy-in from folks, then you need to find a champion. Someone to speak positive about your project or positive about your organization. Someone who is well-spoken and well-respected in a particular community. It’s a successful methodology. You’re not just going to waltz in somewhere and tell them how it’s going to be done.”

What are the primary duties of your job?

What are your main areas of expertise?

Expertise, huh? I’m a very organized person, if that’s anything. Actually, when I was working—before I retired from Southeastern [Colorado Water Conservancy District] — Jim Broderick once told me, “You’re really good at juggling.” And I said, “Huh? I’ve never juggled in my life!” And he goes, “No. You’re very good at keeping a lot of balls in the air and not having them fall.” And I said, “Well thank you. I hadn’t ever thought about that before.”

Describe the coolest project that you’re currently working on.

It’s kind of fun—we’ve identified working with agriculture and keeping ag viable in the basin, so PEPO has partnered with DARCA (the Ditch and Reservoir Company Alliance), the Colorado Ag Water Alliance, and with the Arkansas Watershed Collaborative to host a tour of agriculture in the lower valley. And that’s going to be in conjunction with DARCA’s conference, which will be held on February 21st through the 23rd. DARCA is a statewide organization, so we’ll be able to introduce some of the innovative things that we’re doing here in the valley to other folks in the state. They can learn about the Super Ditch Project, some of the pilot projects that are going on with ATMs (alternative transfer methods), and different things like that. So, it’s kind of exciting …

What made you want to become involved with the Water Educator Network?

Well, just the opportunities that were out there. One of the things that PEPO has been tasked with is putting together water festivals in communities that don’t currently have them. For years, you’ve done that water festival training. So, we were very interested in doing that. And just the opportunity to learn from other people throughout the state is just really valuable.

What does being a Water Educator Network member mean to you?

I think it means opportunity. It gives me the opportunity to network with people that have the same mission as I do. It’s an opportunity to share what we’re doing with other folks. So, I just see it as opening a lot of doors.

What is your favorite Water Education Colorado workshop or event that you’ve attended?

Actually, I got a lot out of that Regional Solutions workshop. I thought that was just so applicable. You know, when I was working at Southeastern I was their project manager for the Arkansas Valley Conduit Project, and that involved 50 small, little water—well, there were some big guys too, La Junta is involved in it—but the majority are small, rural water providers and that is exactly what they need—to start looking at regionalization for sustainability. And so I just found that really applicable, and not just to the big players in Pikes Peak Regional Water Authority, but I really thought it was applicable for all these small folks who just cannot afford to stay in business on their own anymore. And it provided a lot of experience—you know, we’ve learned from others through that. I thought it was an excellent workshop. And you know, that is one of the benefits of being a member of WEN [the Water Educator Network] is to get that discounted registration.

I am proud that I represent water education in the Ark Basin. Cause I’ve been doing it for a long time, but I like that I’m kind of the “go-to person” if somebody needs something. And I get to represent the basin with WEco [Water Education Colorado] and PEPO and different statewide things. I like being that resource.

I rafted in my younger days. The last time I went rafting, we probably shouldn’t have been on that river and it kind of scared me and I haven’t been back yet. There was a big rainstorm up in the upper basin and we went rafting and I mean, that water was just so brown and turbulent and I’ve never seen it like that. They had actually closed the Royal Gorge portion because the CFS were over the limit. So, in the past, I had rafted on this mellow part just north of Park Dale and you could put your hand in the water, you could take a nap. It was just so mellow. [But this time] we were in a group of four different rafts. Every raft lost somebody … And I thought, “Eh, that was just a little too close for me. I don’t want to go in that water.”

What else do you do in your free time?

I garden. I’m an avid gardener. That’s how I started at Southeastern, actually. I was doing their education for their Xeriscape garden out there. So, my whole yard is low water and low maintenance as much as possible. But it’s actually very colorful. It’s not rocks and you know “zero” scape …

What is your biggest goal for 2018, professional or otherwise?

Not work so much (laughter). I’m going to learn to say no. I guess my goal for next year is—I think that water festivals are just so important and we’ve got some new ones started here in the basin, but our oldest one in Pueblo is really struggling … and so I’m seriously considering working with the PEPO workgroup and the water forum to hire maybe a part-time water festival coordinator for the basin just to assist with this task and kind of take the lead on Pikes Peak, Pueblo, Salida … So I’m looking into that scope of work and finding ways to fund. So, that’s kind of what I want to get done next year.