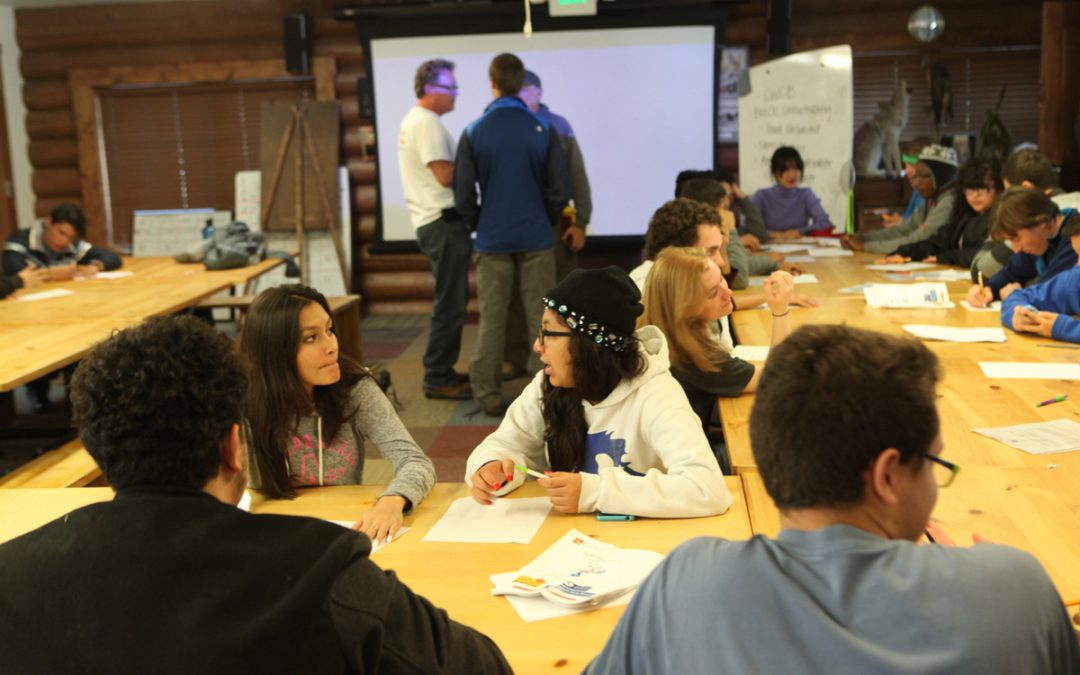 It’s time to nurture young, enthusiastic, and fresh minds to come together in addressing the water challenges of today—and tomorrow.

Snow is falling on the town of Keystone, high in the mountains west of sunny Denver. A few inches have piled already on log buildings strung alongside the Snake River. But the students seated in the dining hall of Keystone Science School’s rustic mountain camp hardly seem to notice. They’re too busy negotiating water rights.

”So, we’re going to buy their water for five years, and they’re going to give us 15 percent off of each gallon that we buy—but only if we use what we need and give them water back,” says America, 15, to two teammates. The trio is roleplaying an oil-exploration firm, one of 10 parties in a huge, convincingly acted conversation.

Here in Summit County, an alliance of one-time competitors for water is preparing the next generation to work together in the face of the growing threat of climate change and resource scarcity. What’s more? They’ve made it interesting.

About 45 high school students attend the yearly three-day H2O Outdoors camp. They come from Aurora and Denver in Colorado’s sweeping east, from the smaller cities across the West Slope, and from the towns strung along Colorado’s mountainous crest. The most any student pays for camp is $25. It’s open to all Colorado high school students; there’s space for less than half of each year’s applicants.

The camp is funded by three groups that historically jockeyed for Colorado’s water resources. The Colorado River Water Conservation District, comprising 15 counties on the West Slope, has sponsored H20 Outdoors since the camp’s beginning a decade ago. A few years in, Aurora Water and Denver Water joined.

The staff have a story they like to tell about a girl from Dillon who attended one year. She was ready, presumably, for the outdoor adventure and the water-allocation experiments. But she wasn’t ready for her assignment: She would be acting as Denver Water in the final ”town hall” scenario. ”She burst into tears,” recalls Mary Dawson, environmental specialist for Aurora Water. ”And she goes, ’My parents hate Denver Water.’”

Some of the state’s smallest communities sit at its highest headwaters, where they have seen rivers divided and rearranged to supply distant cities. It often was a painful process. Denver Water forced the relocation of Dillon itself by buying up land in the cash-strapped town, which sat in the location of the planned Dillon Reservoir. Denver offered up a new town site, leaving residents to move and rebuild by 1961.

Fast forward to the new millennium and this daughter of Dillon “sort of looked at Denver Water as big, bad Denver Water,” says Matt Bond, youth education manager for Denver Water. It could have been an awkward moment, but the teachers and professionals in the room saw an opportunity. They knew that even when two groups’ positions seem diametrically opposed, there may be a solution that serves all sides—and the first step toward finding it is to understand the goals and motivations of the other party.

“And so, it was great,” Dawson proclaims. “They go, ’Then, absolutely, you are Denver Water.’”

An urban student coming from the Front Range might not know that historical context—or understand the urgency of water scarcity. The brilliance of the H2O Outdoors curriculum is that it sends students from all sets on an adventure together. They climb to the Continental Divide to learn where water starts its journey and to share the experience of braving the winds. They play games that represent the challenges of water resource management in miniature and in metaphor. The rustic setting, meanwhile, encourages the same bonds you might see at summer camp. Students make friends, learn about their joint history in water, and then practice making decisions in each other’s shoes.

“First, what Denver Water did was we imposed our drought conservation policies almost universally,” explains Hayley, 15, speaking to the group at the camp’s grand finale. She, too, is a mountain girl play-acting as the city authority. Her hypothetical task: Ensure water flows after a breakdown in the marathon-length underground tunnels that redirect rivers east across the Continental Divide.

Hayley’s team tapped reservoirs and rationed Denver’s supply, then joined with Aurora to test and repair the infrastructure. They convinced the Colorado River District and the ski resorts to fund repairs too, and then bought water through temporary lease agreements with farmers “because they didn’t have a lot of money, and we didn’t have a lot of water,” says Haley. Her team aced the presentation.

This scene could only happen in a handful of places and doesn’t very often. A handful of youth camps nationwide focus on environmental resources, and all seem to meet west of the Mississippi. Texas State University hosts a camp about water sciences, while Montana’s Natural Resources Youth Camp gives a general overview of environmental management. Camp Snowball, to be held this summer in California, shares the H20 Outdoors program’s focus on collaborative leadership and systems thinking but addresses sustainability generally rather than water resources in particular.

The program in Keystone, then, is one of the deepest efforts yet to prepare kids to solve the future’s water conflicts—or at least to understand them. ”It happened here because the Continental Divide divides our state,” says Mike Wilde, the educator at the heart of H20 Outdoors. ”Politically, geographically, water-wise—we are physically a state divided.”

And when adults cross that divide, they can teach a new beginning. Sometimes their children come up with ideas “that we as adult water professionals may scoff at, or may say, ’Well, that’s not possible,’” says Bond. ”But they make it happen here, in their world.”

A LEARNED AND PRACTICED ART

Collaboration is a surefire topic of discussion at industry conferences for everything from accounting to zoo keeping. It’s a skill in high demand for modern business—yet some of its students are looking to one of the oldest industries for advice. The water profession is sharing what it knows. New educational programs turn water management into a study of leadership and cooperation for people of all trades and ages. They package water education with practical skills, aiming to make teamwork in water and beyond just a little easier.

FOR STUDENTS: The One World One Water Center at Metropolitan State University of Denver offers minor and certificate programs, for students of all majors, which trace water through history and law, theater and exploration. The center also hosted its first “water diplomats” weekend in 2015. Funded by the Colorado Water Conservation Board, the three-day program convened students and faculty from schools across Colorado. Their majors ranged from water resources to psychology. They toured Denver and talked in small groups about the law and science of water. After they left, they received $300 if they gave a public presentation on what they learned.

“We thought that by bringing young people together, all of whom have an interest in the future of their state and its precious resources, we could provide an example for those communities working on the new state water plan,” writes Dr. Elizabeth McVicker, who developed the conference.

FOR YOUNG PROFESSIONALS: Panels, meet-ups and forums often convene diverse interests, making them a good way to learn from the “other side.” For example, Colorado Water Congress opens its Professional, Outreach, Networking and Development (POND) committee to a wide variety of organizations and professions that deal with water. The group’s meetups can be the starting point for professional relationships that prove crucial later.

FOR KIDS: Day programs ask grade school kids to jump in the water and spread the word. Earth Force’s Denver program, for example, had fifth-graders test water quality in Huston Lake, located in a southwest Denver city park. Then they teamed up to teach the park’s neighbors about water infrastructure and environmental challenges. In other neighborhoods, students planned and hosted educational festivals and spoke to elected officials. The common theme of these programs: Water is social. Learning together isn’t just more fun—it’s good practice for a complicated world.