The National Rise of Reuse 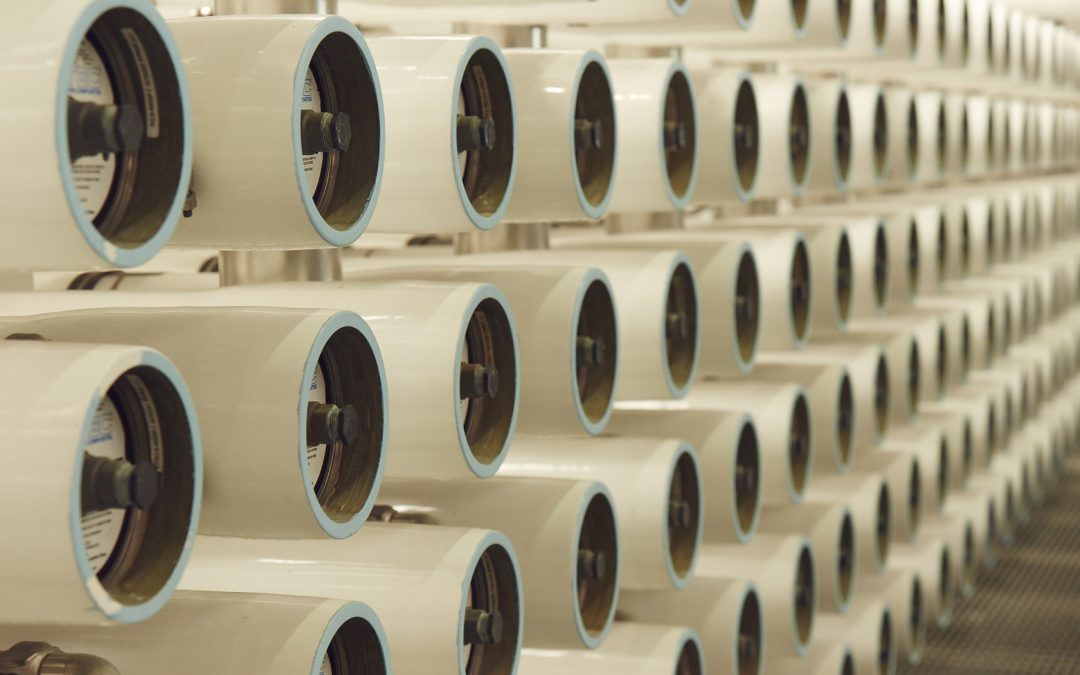 Drought was pinching the North Texas city of Wichita Falls badly enough that by May 2014 it needed 40 inches of precipitation to catch up. Soon after, a direct potable reuse system began sending treated wastewater through an additional five-stage treatment process approved by the Texas Commission on Environmental Quality. The water was then blended with treated water from two fast-declining reservoirs for delivery to kitchen faucets and shower stalls in the city of 104,000 people.

T-shirt vendors had fun: “Wee Recycle,” said the lettering on one. City and state officials heard no complaints, although sales of bottled water at Walmart stores increased 9 percent before rains returned. As originally planned, Wichita Falls then modified the direct potable system after 11 months of operation with an environmental buffer, creating indirect potable reuse.

Indirect potable and non-potable reuse have been increasing rapidly in the United States. A 2015 report by Bluefield Research estimated that reuse of wastewater by municipalities would increase 61 percent by 2025. One-third of California’s wastewater could be reused by 2020, according to another 2014 report by the WateReuse Research Foundation, now called the Water Research Foundation. In other places, reuse is just a fact of life and a reflection of geography. A third of Houston’s water, for example, comes from a reservoir on the Trinity River—half of whose water over the course of a year consists of wastewater originating upstream around Dallas-Fort Worth.

Direct potable reuse, permanent and not temporary, is still a frontier. Just a few locations are fully embracing direct potable reuse as of fall 2018, yet the technology has been around for decades—first used in Africa. In Namibia, the City of Windhoek implemented potable reuse without an environmental buffer in 1969. It now supplies about 50 percent of the city’s potable water demand. In South Africa, Beaufort West commissioned a direct potable system in 2011.

The West Texas City of Big Spring is credited with the first permanent direct potable reuse system in the United States. It began operating in 2013 and continues to produce two million gallons of water daily from treated wastewater to blend with surface water.

El Paso may join Big Spring within a few years. “It’s the next logical step for El Paso Water, since we have been doing indirect reuse for more than 30 years,” says Christina Montoya, communications and marketing manager for El Paso Water Utilities. Design work began in 2018 but is not expected to be complete until 2019 or 2020. “A lot of it is contingent on funding,” says Montoya. It’s also dependent upon public acceptance. But on that, El Paso has been working hard. A 2013 survey found that 84 percent of El Paso utility customers favored direct potable reuse. Montoya credits multi-pronged outreach that was motivated by efforts in California.

California has been on the cutting edge of water reuse since the 1960s. In Orange County, south of Los Angeles, Water Factory 21 was established in 1976 as the first project to inject recycled wastewater into a seaside aquifer as a barrier to saltwater intrusion. In 2018, the aquifer recharge system was upgraded and expanded to become the world’s largest advanced water treatment system for potable reuse.

During the 1990s, though, California potable water reuse efforts stumbled badly. Most infamous was San Diego. There, the utility planned to fill a reservoir with a mix of treated wastewater and freshwater—the effluent was slated to comprise less than 20 percent of the reservoir. The plan was victimized by public relations missteps and bad timing.

California is now moving methodically toward adoption of regulations governing direct potable reuse, probably by 2023 says Jennifer West, managing director of WateReuse California. West says she believes the public has become much more comfortable with recycled water in general. “We have really evolved in terms of our environmental ethic and how we think about water. [The public] understands that it’s not appropriate to use the water once and dump it out into the ocean. I think people are more comfortable with technology.” 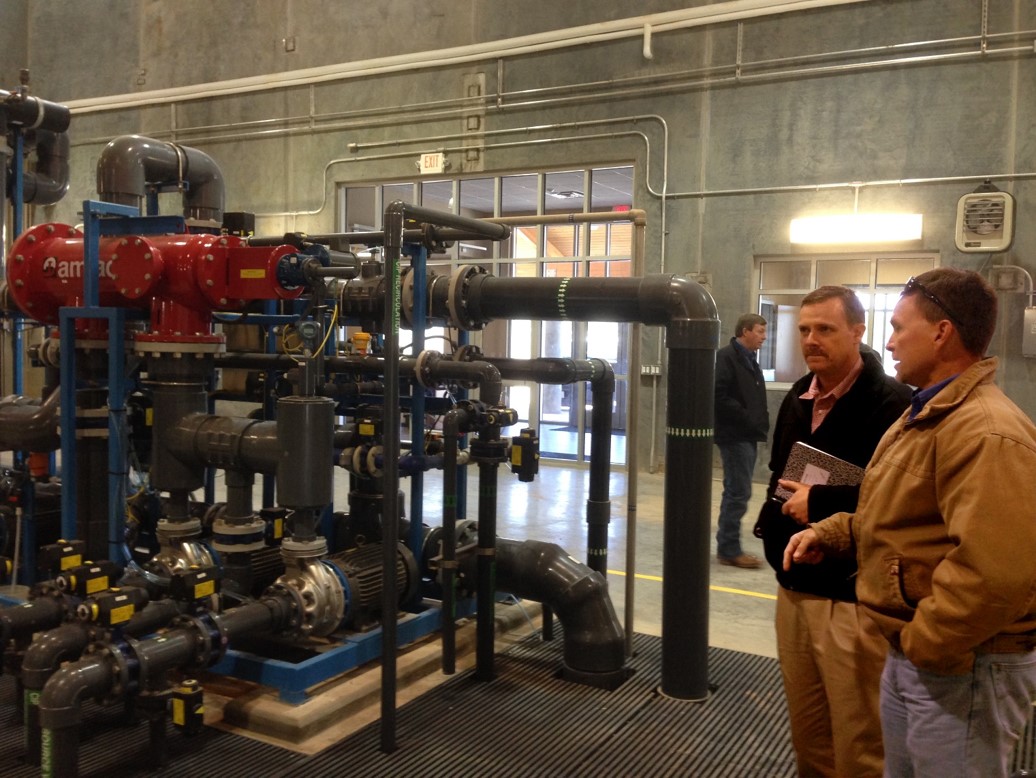 At the first direct potable reuse plant in the country, the Big Spring Raw Water Production Facility in Texas, Troy Walker (left) with Hazen and Sawyer evaluates the performance of the facility, while walking with John Womack (right) with the Colorado River Municipal Water District. Photo courtesy of: Hazen and Sawyer and the Colorado River Municipal Water District

Reuse is not just a southwestern thing, though. Just west of Washington D.C., in Virginia’s Fairfax County, the Occoquan Reservoir had inferior water quality by the mid-1960s. The solution was water treatment that produced indirect potable reuse. In Georgia, another major indirect potable reuse project was launched north of Atlanta in 2001.

Now, a stakeholder process has convened in Florida to begin creating regulations for direct potable reuse. Completion of that process if followed by a direct potable reuse project, will “reverberate across the East Coast and send an important signal that direct potable reuse is a safe and effective method of providing drinking water supplies to key population centers grappling with increasing demand and other pressures,” says Patricia Sinicropi, executive director of the national WateReuse Association.

Many Florida communities draw on groundwater that is being diminished by salt-water intrusion as a result of sea level rise. That’s also a problem in Virginia at the Hampton Roads Sanitation District. Sea-level rise there has been compounded by land subsidence caused by overdrafting of groundwater. Reuse is a solution to avoid over-drafting and hence subsidence.

In southern New Mexico, the small town of Cloudcroft is at 8,668 feet in elevation, where rising oceans pose no immediate threat but water scarcity challenges are persistent. That scarcity motivated village officials to authorize a direct potable reuse plant. A four-inch pipe will run two miles from the wastewater treatment plant to a new drinking water treatment plant, now under construction, that uses reverse osmosis plus five other steps before the water is considered purified. Scott Powell, Cloudcroft’s water plant operator, estimates the direct potable reuse system will be operating by 2020.

Colorado was a pioneer in potable reuse efforts, with key work done by Denver Water in the 1980s. Now, says Sinicropi, Colorado ranks among the top six states in its advanced reuse efforts.

Sinicropi says she believes reuse, including direct potable reuse, will become more common in many places because of simple economics. Federal standards have become more exacting over the decades, requiring more rigorous—and expensive—treatment processes for wastewater. “Ratepayers,” she says, “are not going to put up with paying very high rates to treat wastewater to very high standards only to throw it away.”