Salvaging Streamflows on the San Miguel 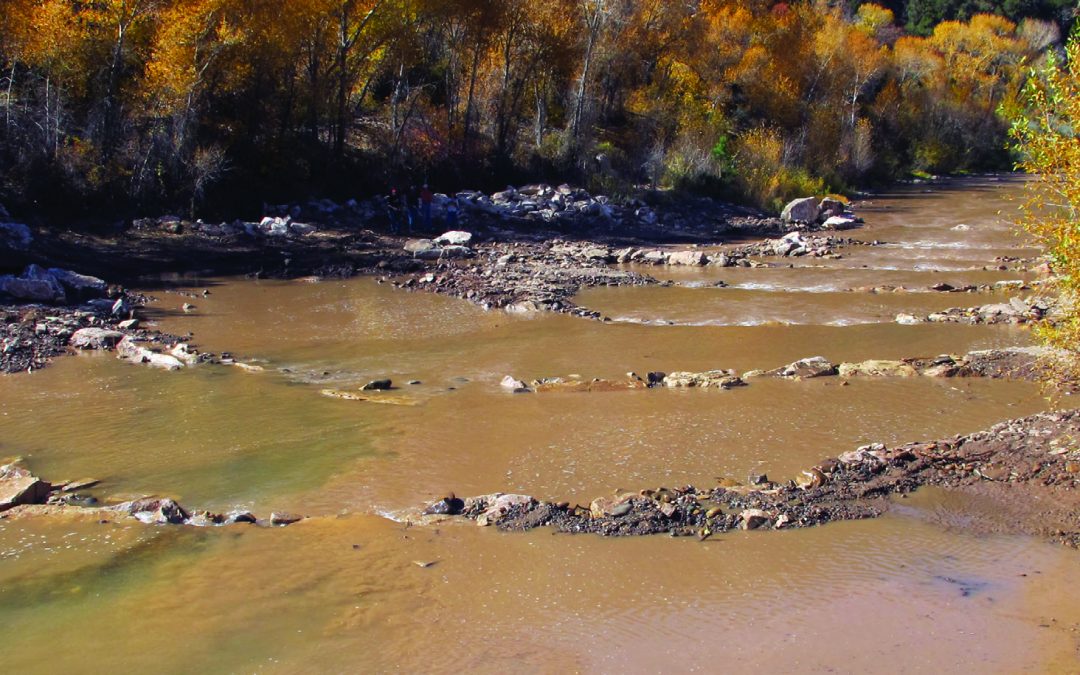 The San Miguel River gets a facelift below the Colorado Cooperative Company dam. Photo courtesy of: Colorado Water Trust

For more than 40 years, the Colorado Cooperative Company’s dam diverted much, if not all, of the San Miguel River near Naturita for irrigation.

Any diverted water not used by irrigators was returned to the riverbed 1,500 feet downstream. During dry periods, the 1,500- foot stretch below the concrete dam ran completely dry, severing the ecosystem along one of Colorado’s last free-flowing rivers. During periods of higher flow, a large drop between the dam and the river channel created a dangerous hydraulic that caused safety issues for boaters and prevented fish passage.

Complementing its better-known work securing water rights for instream flows, the nonprofit Colorado Water Trust (CWT) led the charge to restore both streamflows and boater safety to the river while maintaining agricultural diversions. Together with partners that included the Colorado Cooperative Company, the Colorado Division of Parks and Wildlife (CPW), The Nature Conservancy and the Bureau of Reclamation, CWT hired engineering firm FlyWater to design a project. In the end, partners left the dam intact but built a fish ladder in the river bed—creating a berm and series of pools to gently connect the diversion structure with the river below.

“We did this basically for the good of the river and for fish and boaters.” – George Glasier

Originally envisioned by the San Miguel Watershed Coalition nearly a decade ago, a plan for the project wasn’t solidified until 2009, after CWT was left the reins. It was a lengthy and frustrating process, according to George Glasier of the Colorado Cooperative Company. Within a year of the plan’s approval, however, CWT raised more than $250,000 in needed funds—from the Colorado Water Conservation Board, the Fishing is Fun arm of CPW, the Walton Family Foundation, the Southwestern Water Conservation District and the Telluride Foundation—and by November 2011, project partners were sitting on the riverbank sharing thoughts on their recently-completed project. “They were, I think, surprised and pleased that folks of different interests could get together and figure out a solution,” says Amy Beatie, executive director of CWT.

“It wasn’t crucial to us,” Glasier says. “We did this basically for the good of the river and for fish and boaters.”