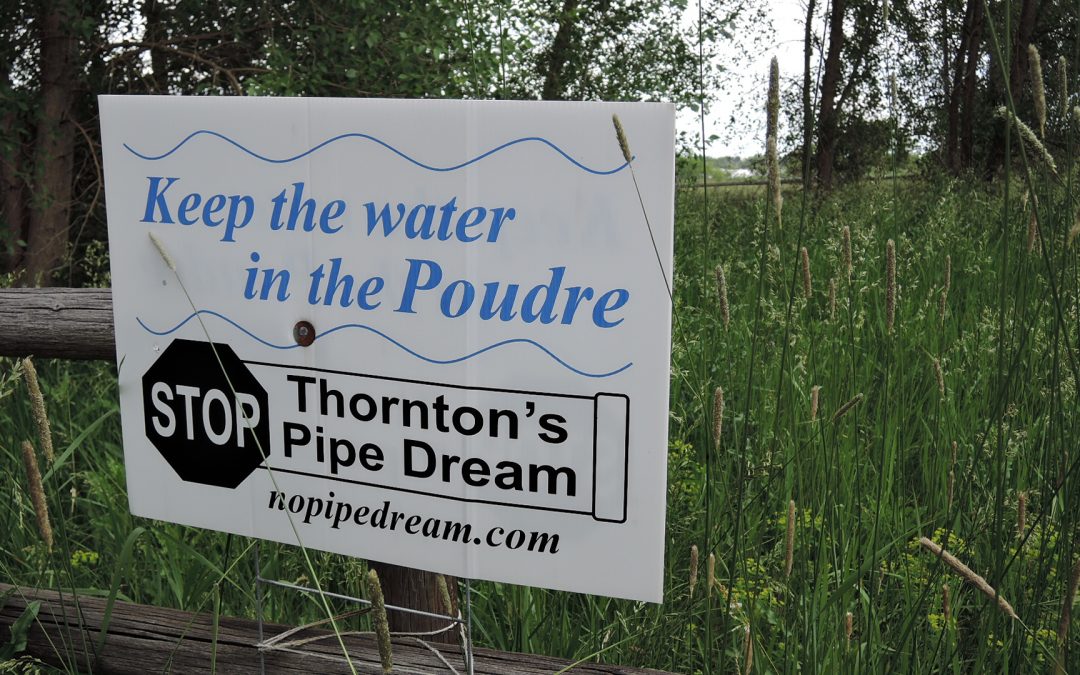 Bulking up local control over natural resource projects is currently a major focus in Colorado. One tool county and city leadership are using to exercise local authority over water development is the 1041 permitting process.

The Boulder County Commissioners are requiring Denver Water to undergo their 1041 permitting process for the utility’s controversial proposal to triple the size of Gross Reservoir in what would be the county’s largest construction project to date. Denver Water is now suing the Boulder commissioners over that demand.

Another major 1041 permitting battle is playing out in the Larimer County, Fort Collins area where in late 2016, early 2017 the city of Thornton, home to around 140 thousand people, began public engagement on a proposal to build a pipeline to send water it purchased in the 1980s from reservoirs north of Fort Collins to Thornton to serve their growing population. 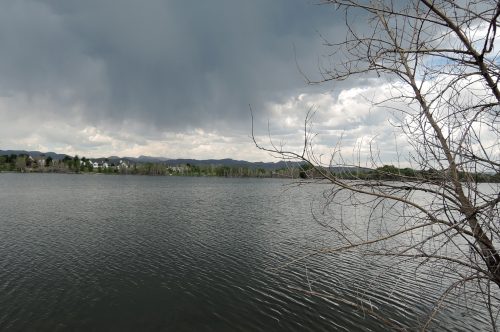 The Thornton Water Project proposes the transfer of water from WSSC Reservoir No. 4 in Larimer County via pipeline and canals to downstream water uses in the suburb of Thornton near Denver. Photo by Hannah Leigh Meyers

After Larimer County commissioner’s rejected Thornton’s original proposed pipeline route, the city put together a working group and hired an independent facilitator to try to work out an agreement with the Larimer County community and meet the county-crafted regulations outlined in their local 1041 permit process.

In February of 2019 the Larimer County Commissioners issued a unanimous vote on the revised Thornton Water Project proposal. Commissioner Steve Johnson explained the overarching reasoning behind their decision saying, “We must make a finding that a 1041 permit meets every one of those 12 criteria if we are to side and issue that permit. I think Larimer County recognizes your right to this water and remains willing to collaborate and work with you on a proposal that does meet these criteria but I cannot support this proposal tonight.” Specifically, the Commissioners cited health, safety, environmental and local benefit concerns for their “no” vote.

Todd Barnes, Communications Director for the city of Thornton, says although the public engagement the 1041 permitting process allows is a good thing, Thornton feels the voices of those opposed to the project may have overshadowed the details and outweighed the voices of the Larimer County staff that recommended approval.“We went through a thorough examination of the record and of everything we submitted and we feel like they didn’t even follow their own guidelines and all this is going to get played out in court and a judge is going to get to decide all this stuff. But, from Thornton’s perspective we don’t think that the commissioners did as good of a job as their staff at looking through everything that we presented in the record,” said Barnes.

Two opposition groups, Save the Poudre and No Pipe Dream, are pushing Thornton to adopt an alternative plan allowing future and current water diversions from the Poudre River to run downstream to a takeout point past Fort Collins, improving the ecological health of the Poudre and removing the need for the pipeline. But, Thornton is steadfastly opposed to the Poudre River Option saying it would degrade the quality of the clean drinking water they are entitled to that’s currently housed in reservoirs north of Fort Collins. 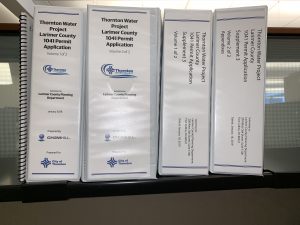 Former Larimer County Commissioner Karen Wagner is part of the No Pipe Dream group that, along with Save the Poudre, is attempting to join the lawsuit over the Thornton Water Project on behalf of the Larimer Commissioner’s decision not to issue the 1041 permit. Wagner says just like in the 1041 process, they should have the right to join the debate, regardless of Thornton’s opposition to their involvement in the legal proceedings.

“They’re questioning our standing but we don’t have any doubt that the judge will allow our motion to intervene because we’ve been a part of all these hearings, we’ve done all the research, we’ve done all the CORA requests to try to understand this so we don’t want to be left out of the process and we don’t want to see Larimer County settle out of court on something that the public would not have any input on. So, if you overturn our denial then you need to send the application back to Larimer County to start over again and that would be acceptable. That would prolong our work for another year or two but we’d be back,” says Wagner.

It may seem like 1041 permit disputes over water projects are on the rise. Another 1041 case is currently playing out in Bent County over a water deal between Arkansas River Farms and the Lower Arkansas Water Management Association. As localities see other communities control water development in their area with 1041 powers, more cities and counties are writing their own 1041 regulations. But land use attorney Gerald Dahl says the current focus on 1041 powers in Colorado is part of a greater trend in water use projects.

Both Denver Water in their proposal to expand Gross Reservoir in Boulder and those leading the Thornton Water Project say they care about and are listening to concerned communities. Some of the public is challenging those claims but, with 1041 powers at play and locals more involved than ever in water issues, both sides of water development projects are going to need quite a bit of patience and persistence.