A feverish stream, a legion of volunteers, a $1.7 million grant. Is it enough to help the Yampa River keep its cool?

Could something as simple and natural as a ragged corridor of expansive, towering shade trees help a river arm itself against a world in which temperatures are rising?

In northwestern Colorado’s Yampa River Basin, a 300-person-strong army of volunteers is banking on it.

The Yampa River historically has produced so much abundant, clear, cool water that its fish, kayakers, and the farmers along its banks were rarely left wanting.

But climate change is altering that dynamic. Last summer the river’s flows shrank sharply, and its formerly cool waters became dangerously warm, threatening the fish. Its high fever prompted the City of Steamboat Springs to close the popular stretch through town to fisherman and boaters on multiple occasions to avoid further stressing the mountain white fish, which is found in few other Colorado regions.

The shut-down was a huge blow to the city and to local rafting and tubing companies who rely on the river for their livelihoods.

The disturbing heat added urgency to a small program that has been gaining supporters and clout in the Yampa River Basin. The Yampa Sustainability Council (YSC), aided by $175,000 from local donors and some state grants, has ramped up a broad-based tree planting program along the river’s banks known as ReTree. Additional funding from a new $1.7 million Nature Conservancy water fund will add even more muscle to the effort.

On a hot Friday afternoon in late June, Sarah Jones, executive director of the YSC, parks at a trailhead just east of town, slathers herself in sunscreen, and loads a white plastic bucket with small calipers, a measuring stick, a GPS device and wooden stakes to take down to the river’s edge. These are the tools she and others will use to carefully locate and measure the progress of trees planted in recent years. 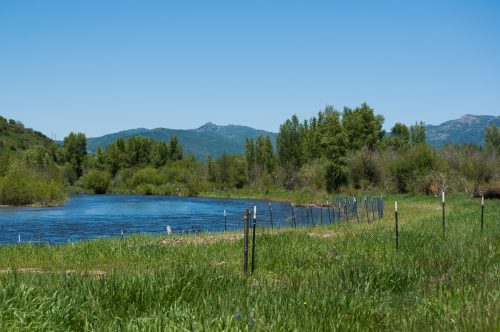 A restorative area on the Yampa River where groups are working to plant trees to provide natural shade and coverage for the river in the future. June 28, 2019. Credit: Callie Rhoades, CU News Corps, The Water Desk

The reforesting work is conducted with a careful, slow precision. Each tree that is planted along the banks, and there are hundreds, is assessed, measured and located each season, even as more are placed in the ground.

The trend of warming rivers is creating a need for new science and reams of field data. “This is a new, not well-understood problem,” Jones said.

She and her partners, including the Colorado State Forest Service and the City of Steamboat, are taking the long view, carefully evaluating each year what has worked, discarding practices that have failed, and boosting those that have succeeded.

They once used elaborate planting protocols for placing the young saplings in the ground, but the trees respond much better when their small root balls are poked into the side of the bank, almost casually, supported by simple twigs. The starter trees also like being planted in the fall, they’ve learned, not the spring.

The Yampa River, in some ways, is a blessed stream, with more water than most Western rivers, and a community of hard-working, often wealthy, advocates.

This year The Nature Conservancy announced it had raised $1.7 million in a long-term water fund to restore and protect the Yampa River. The goal is to raise another $4.3 million to protect the watershed.

It is an unheard-of sum in this remote, northwestern corner of the state.

But those who know the Yampa understand the significance of protecting it, not just for the sake of this region, but for the state of Colorado and even for the greater American Southwest.

The river sits near the headwaters of the drought-stressed Colorado River system and is one of its last, mostly free-flowing tributaries. Because it is relatively unhindered, with only a few small reservoirs high on its mainstem, it serves as a kind of benchmark for scientists seeking to understand natural river dynamics and mimic them elsewhere.

Keeping the Yampa healthy also helps a much broader effort in the West to bring the Colorado River system back from the edge of a crisis precipitated by population growth, a nearly 20-year drought, and rising temperatures.

Jones and her colleague Caroline Manriquez, assistant district forester with the Colorado State Forest Service, walk slowly along a public stretch of the river. Each of them notes the young trees planted two or three years ago that are outgrowing the metal cages put in place to protect them from beavers, who are both a curse and a blessing on the river.

“On the one hand we want them,” said Manriquez, because their work on the river creates natural dams and habitats. “But on the other hand, they’re cutting the trees we want to preserve.”

Each tree that outgrows its anti-beaver cage will need to be visited, its protective metal enclosure cut off and a bigger one put in place.

The re-treeing effort anticipates a Johnny-Appleseed kind of longevity, with some 200 shade trees planted annually over the next 20 years.

“This is a huge project, and we are planting very small trees,” Manriquez said. “But given the water issues climate change is creating, we decided we had better start now.”

Like other river basins around the state, the Yampa Basin has developed a state-funded management plan for the river. Some of that funding went toward several years of studies and planning to develop the science to support the reforestation effort, said Kelly Romero-Heaney, water resources manager for Steamboat Springs.

“We’ve done a tremendous amount of modeling to look at what this river will look like in the future,” Romero-Heaney said.

Just downstream of the work zone, on the opposite bank from the workers, is a nursery which houses hundreds of delicate, young willow, cottonwood, and box elder trees. These varieties are known for growing tall and spreading a generous shade canopy.

The young seedlings have been sprouted in a nursery in Fort Collins, then transferred up to the Steamboat nursery early in the summer, all in preparation for the fall planting season.

These seedlings will be planted in the public stretches of the river, but reforesting there alone won’t be enough.

Jones and Manriquez know that the key to success for the project will be to bring the private landowners who control most of the land on the river’s banks into the program.

And that’s not easy. Western ranchers are notoriously government-averse, skittish about letting federal and state environmental officials onto their property, they said.

Rancher Steve Williams is an exception. He owns 200 acres of land along a critical reach of the Yampa east of Steamboat Springs, one that has been degraded by heavy cattle grazing, its cottonwood canopy gone, its streambed wide and much shallower than it once was. 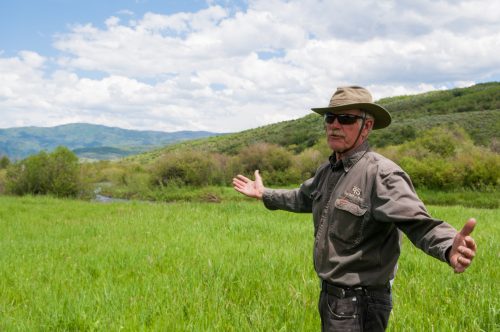 Steve Williams, a local rancher in Steamboat Springs, shows a section of the Yampa River through his land that he works to protect and conserve. June 29, 2019. Credit: Callie Rhoades, CU News Corps, The Water Desk

As a result the water temperature here each summer threatens to exceed the state’s standard for the stream. If Williams can cool down his reach of the river, it will help everyone farther down and closer to Steamboat Springs.

To achieve this, he has partnered with federal agencies to shore up the river’s banks, deepening it as it curves, snakelike, through the wetlands and pastures above Lake Catamount.

This land hasn’t been grazed in 10 years, Williams said, and he’s hopeful the bank restoration work, as well as the re-treeing effort, will give this stretch of the river the assistance it needs to heal.

Williams understands the magnitude of the work that lies ahead and the challenges, the discrepancy in scale between young trees and a sprawling Western river, and the global dilemma of warming. “We will see how this goes,” Williams said. “It is a Band-aid, but it’s one I think will last at least through my lifetime.”

Romero-Heaney and other river advocates know that they will likely never see the final results of this reforestation effort, but based on the preliminary studies, they see it as an important tool for helping this playful, powerhouse of a river flourish in a very different world than it has inhabited up until now.

“I have to believe that if any river can persist through climate change, it will be the Yampa,” Romero-Heaney said.

This story is made possible, in part, by The Water Desk, an initiative of the University of Colorado’s Center for Environmental Journalism.