Fishing at a park in Wray, Colorado. Credit: City of Wray.

Early next year Colorado lawmakers will consider a bill that expands the Republican River Water Conservation District, helping the district pay for a program that ensures the state delivers enough water to Kansas and Nebraska to meet its legal obligations.

Colorado has spent millions of dollars battling lawsuits over the problem and earlier this year agreed to pay Kansas and Nebraska another $4 million in damages.

Last week, the Colorado General Assembly’s Water Resources Review Committee recommended a bill that would redraw the boundary of the Republican River district to include several hundred additional wells whose pumping is reducing the flow of the river. 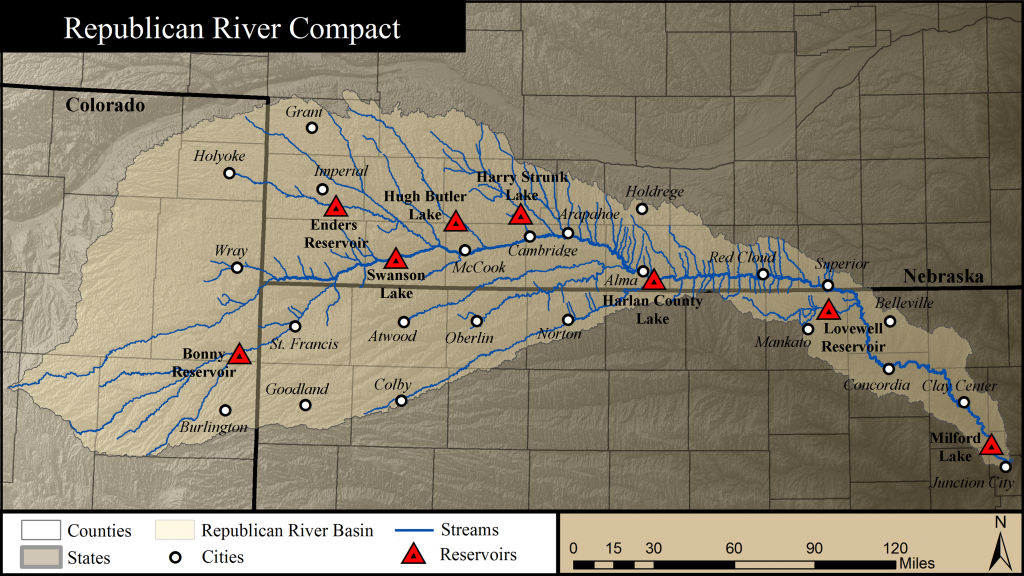 The bill would allow the district to assess the same fee on those well owners that it does on all irrigators in the district in order to pay for a pipeline that transports additional water to the river.

The compact operated effectively until Kansas sued Nebraska in 1998, alleging that excessive pumping of wells tapping groundwater with connection to the river was decreasing surface water flows into Kansas. The litigation implicated Colorado because its own groundwater pumping was also affecting surface water downstream, putting Colorado in noncompliance.

The U.S. Supreme Court approved a settlement in 2003, in which the three states agreed that streamflow depletions caused by well pumping would be determined using a groundwater model that analyzed wells within a certain area known as the “model domain.”

The Colorado General Assembly created the Republican River Water Conservation District the following year to assist the state in complying with the compact. The district secured a $62 million loan from the Colorado Water Conservation Board in 2008 to purchase groundwater rights from farmers and build a 12-mile pipeline to transport that well water to the North Fork of the Republican River on the Colorado-Nebraska border. It levied an assessment of $14.50 per irrigated acre to repay the loan.

The assessment has not been without controversy. The district’s boundary was drawn to cover the surface water drainage area of the Republican River in seven eastern Colorado counties—Phillips, Yuma and portions of Kit Carson, Lincoln, Logan, Sedgwick and Washington. It did not include wells depleting surface flows that are inside the modeling area but outside the river basin. As a result, the assessment has not been applied to those wells.

The bill the Water Resources Review Committee approved Sept. 27 would expand the district boundary to include portions of Cheyenne County and wells within the modeling area. “Their wells are contributing to this depletion,” said attorney David Robbins, general counsel to the Republican River Water Conservation District, “but because they are outside the district’s boundaries they’re not contributing to the cost of solving this problem.” For Robbins and the district, “It’s a matter of fairness.”

Kevin Rein, Colorado State Engineer, told the committee that his office has begun a rulemaking process to ensure the state is in compliance. “The draft rules,” he noted, “would provide that those water users that are not participating in a compact compliance plan would be curtailed.”

John Buchanan, an attorney representing well owners in the East Cheyenne Groundwater Management District that would be incorporated into the new boundary, said his clients haven’t had enough say in the issue.

“Their concern is that this expensive project was developed by well owners in the northern part of the basin and that East Cheyenne didn’t have any input.”

Buchanan said it wasn’t clear what benefits East Cheyenne well owners would receive from the pipeline, and that his clients “don’t feel like they have enough information about what would happen if they were included in the district.”

The state engineer has identified 342 wells and approximately 54,000 acres of irrigated land that would be brought under the new boundary, generating several hundred thousand dollars annually to help repay the pipeline loan.

The bill passed the committee on a 7-3 vote and will be introduced once the legislature convenes in January.

In addition to the Republican River bill, the Water Resources Review Committee also considered a bill on deficit irrigation. Deficit irrigation is a strategy that applies less water than optimally needed by a crop. A proposed bill would have added deficit irrigation to land fallowing as pilot projects the Colorado Water Conservation Board could approve, with the saved water being available for short-term leasing for other uses.

Proponents viewed the bill as an alternative to the permanent acquisition of agricultural water rights and loss of farmland known as “buy and dry.” Opponents contended that it is difficult to know how much water a crop is consuming through deficit irrigation and how much is conserved and available to be leased, creating the potential for injury to other water rights holders. They also argued that deficit irrigation implies not all the water is being put to beneficial use as required by law.

Although the bill received support from a majority of committee members, it didn’t garner the two-thirds vote required to advance to the legislature at the Sept. 27 committee hearing. Whether it is introduced again next session is still to be determined.