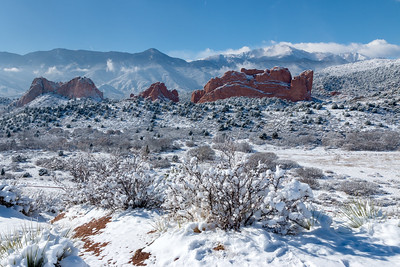 Snow in the Garden of the Gods. Credit: Creative Commons

Colorado snowpack is registering well above normal across the state, and reservoirs are plenty full, a situation water managers say bodes well for this year’s water supply, assuming that spring snows materialize as they normally do.

“We’ve been shut out [in terms of snowfall] on the Front Range and Eastern Plains,” said Peter Goble, climate specialist at Colorado State University’s Colorado Climate Center. “But January is normally our dry season. If there is a good time to be shut out, it’s now.”

Even with a dry January, statewide snowpack is measuring at 110 percent of average. Snowpack along the Front Range is registering at 111 percent in the South Platte River Basin and 112 percent in the Arkansas Basin. 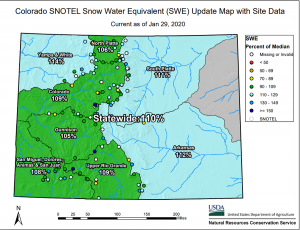 Looking ahead to the warm spring months, Goble said he had some concerns that forecasts called for an essentially equal chance of wet or dry weather.

Southern Colorado and the Eastern Plains have been hit particularly hard by chronic drought conditions over the past eight years, and weather watchers expressed concern that these regions will suffer if the spring turns out to be warmer and drier than normal.

Snow levels in each of the major river basins are above average and nearly equivalent. The Yampa River Basin, in northwestern Colorado, stands at 114 percent of average this week, while the upper Rio Grande is measuring at 110 percent of average.

Snowpack is closely watched across Colorado because every region in the state relies on melting mountain snows for the majority of their water supplies.

Each month, until May, the snowpack is measured and runoff forecasts are made so that water managers can plan for the year.

Though Colorado left a severe drought behind last spring, after a winter of spectacularly deep snows, a dry fall pushed large swaths of the state back into drought, according to the U.S. Drought Monitor.

Now just under half of the state, largely the southern portion, is classified as being in moderate or severe drought.

Still, if the spring turns out to be dry, forecasts indicate snowpack will likely be in the 85 percent of average range at their peak in mid-April. But if spring storms bring plentiful snow, that number could easily soar above 115 percent of average. And even that may be conservative.

“We could see something really wacky happen that will bring us well above even this current forecast,” Goble said.