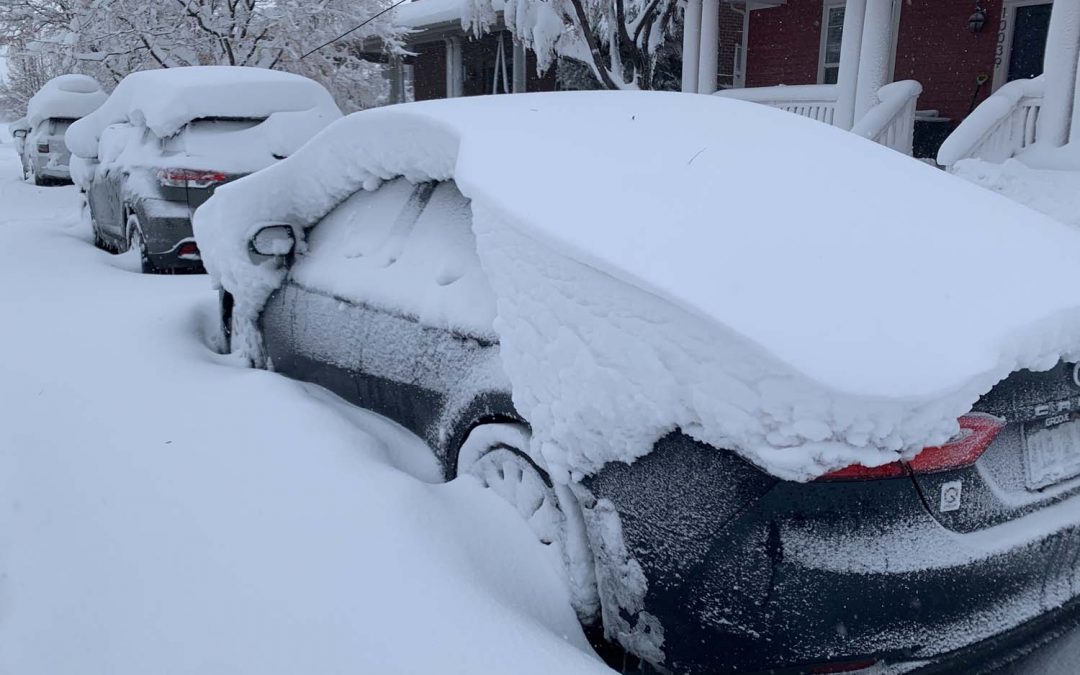 Just two river basins, the Arkansas and the Rio Grande, are registering above average at 101 percent and 106 percent respectively. Among the driest are the Gunnison Basin, at 86 percent of average, and the San Juan/Dolores, at 83 percent, both in the southwestern part of the state.

“The snowpack numbers are still below normal though they don’t look that bad,” said Peter Goble, a specialist with the Colorado Climate Center at Colorado State University. “But based on how dry soils were to start this accumulation season, we’re still pretty nervous about what water availability is going to look like.”

Those numbers are hard to believe for some, given that nearly 30 inches of snow fell in and around Denver the weekend of March 13, with some portions of the foothills and higher receiving more than three feet of snow. It is considered the fourth-largest storm in Denver’s history. 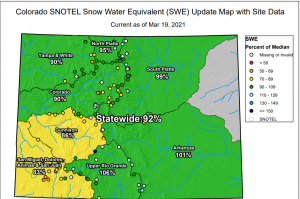 According to the U.S. Drought Monitor, the entire state remains mired in drought, with nearly half classified as being extremely or exceptionally dry, the most dangerous categories.

Mountain snowpack is watched closely in Colorado and other Western states because as it melts, it fills rivers and reservoirs to supply the state’s cities, farms and industries with water for the coming year.

Thanks to 2020’s severe drought, in November, for only the second time in its history, the Colorado Water Conservation Board activated its municipal emergency drought response plan in an effort to help cities cope with the dry conditions.

As part of that effort some 14 metro area cities have agreed to coordinate how they inform community members of potential drought restrictions.

“The biggest thing is we don’t want to be counter-messaging anybody,” said Greg Baker, spokesperson for Aurora Water. Aurora is one of the members of the new drought coordination group. “Towns that have robust storage like Denver and Aurora may not need restrictions. But there are about 50 water utilities across the Front Range.”

Those that don’t have hefty storage systems might have to declare drought emergencies, as many did in 2012 and 2013, Baker said.

And when, for instance, major TV stations broadcast that there are no restrictions in Denver or Aurora, it makes it difficult for communities that have to impose limits to help customers understand the vast differences in drought response, he said.

How this year will play out isn’t clear yet, Baker said. Aurora’s reservoirs are at 63 percent of capacity, the low end of normal. Aurora draws its water from the mountains in the Arkansas, Colorado and South Platte river basins.

“A lot of customers forget that we may have had some good snow down here but that is not where we collect our water. It happens up in the mountains,” Baker said.

Even as mountain snows approach the average mark, soils remain dry and therefore capable of absorbing much of the snow that will melt in the spring.

“We’re getting reports that soil moisture is 10 inches below normal,” Baker said. “Will runoff be sucked up? We don’t know.”

Of particular concern to hydrologists and water watchers across Colorado is the forecast for the seven-state Colorado River Basin. The river begins high in Rocky Mountain National Park and, together with tributaries in Colorado like the Gunnison, Yampa, and Dolores rivers, it supplies all of the state’s Western Slope’s water as well as roughly half of the water for Front Range cities and tens of thousands of acres of farms in the Eastern Plains.

As it flows south and west, the river supplies not only Colorado but also Wyoming, Utah and New Mexico, a region known as the Upper Basin, and Nevada, Arizona and California, known as the Lower Basin. It also supplies Mexico.

The basin has two major storage reservoirs in the U.S. and they are filled almost entirely from the mountain snows generated in the Upper Basin. The forecast for the basin remains grim, with the U.S. Bureau of Reclamation estimating that Lake Powell will see inflows of just 47 percent of average as of March 3, the most recent data available.

According to Reclamation, the last half of 2020 was one of the driest periods on record in the Colorado River Basin, and closely resembles the deep droughts of 2002, 2012, 2013 and early 2018. These are, according to the March 3 report, four out of the five driest years on record.

Levels in Powell and Mead are likely to drop low enough this year to trigger additional cuts in water deliveries to Lower Basin states. The recent blizzard in Colorado, because it did not benefit Colorado’s Western Slope and the headwaters of the river as much as it did the Eastern Slope, aren’t likely to change that, according to Reclamation.