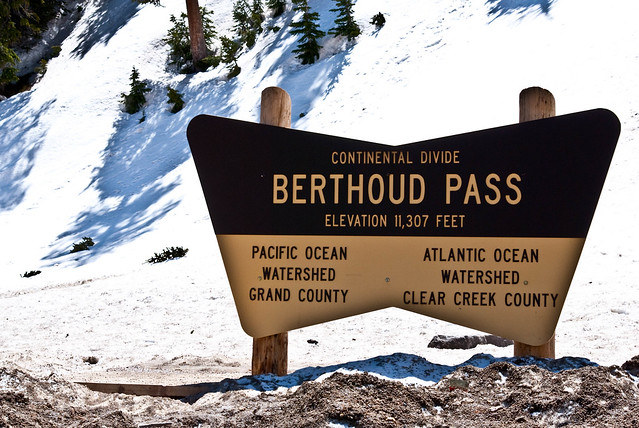 Vandals caused an estimated $1 million worth of damage to the City of Northglenn’s collection system on top of Berthoud Pass earlier this month, shutting the system down for several days. As the Grand County Sheriff investigates, Northglenn water officials say they fear the damage is the work of eco-vandals, upset over ongoing diversions from the drought-stressed upper Colorado River to the Front Range.

For years, the City of Northglenn has captured water on top of Berthoud Pass and delivered it down to its customers north of Denver.

But on Aug. 2, when water should have been flowing freely, the reading on the measuring gauge on what’s known as the Berthoud Pass Ditch fell to zero. On investigation, the city found the system had been vandalized, with diversion structures torn apart and locks cut, allowing millions of gallons of water to flow back into the Fraser River, a tributary to the upper Colorado River, instead of Northglenn’s ditch.

“It seemed very intentional,” said Tamara Moon, Northglenn’s manager of water resources. “They did a doozy on us.”

Roughly $100,000 worth of damage was done to the diversion system, with another $900,000 in water lost, according to the Grand County Sheriff’s office.

Lesser damage to the structure, part of which can be accessed off a hiking trail near the old Berthoud Pass ski area, occurred in March, Moon said.

But she believes now that both efforts are linked to the political tension over transmountain diversions from the water-stressed upper Colorado River to the Front Range.

Two major expansion projects, including an effort by Denver Water to bring more water from the Fraser River and one by Northern Water to bring over more from the upper Colorado River near Granby, have sparked major lawsuits by several environmental groups, including Save The Colorado, WildEarth Guardians and the Sierra Club, among others. The lawsuits are pending in court.

Gary Wockner, executive director of Save The Colorado, declined to comment on the tensions surrounding the proposed diversions but said he had not heard of any similar acts of vandalism in the area.

Though Northglenn isn’t involved in either project, Moon said the fact that her city’s diversion system is pulling from the same watershed has likely exposed it to the frustration over the diversions.

The week the system was disabled, Northglenn was delivering water to the City of Golden, one of its customers on the system.

Golden lost several days’ worth of water as a result of the incident, but because its system, like most, has benefited from an abundance of water this year, the temporary cut-off didn’t affect the city’s ability to provide water to its own customers.

“It really hasn’t had an impact on us,” said Anne Beierle, Golden’s deputy director of public works. “From our perspective though, it’s a little disconcerting and it’s disappointing. If it turns out to be [eco-vandalism], it is unfortunate.”

The Grand County Sheriff’s office is still investigating the incident.

Grand County, home to Winter Park and Granby, is also one of the most heavily diverted counties in Colorado, with millions of gallons of water from the upper Colorado and Fraser rivers being diverted to the Front Range to serve dozens of communities.

The four diversion gates that were broken were roughly one-half mile apart, Mayer said. “Somebody wanted to break these gates. You had to [hike in to] find them.

“We have a lot of water agencies running [water] out of here. But we haven’t seen any incidents like this at other systems. It makes it seem as if it could very well be some kind of eco-terrorism, and we would very much like to find out who did it.”

Mayer said the charges any suspect would face include felony theft, felony criminal mischief, and first degree criminal tampering and trespass, all of which could result in significant jail time and fines.

In addition to installing new diversion gates and locks, Northglenn’s Moon said the city is installing remote cameras in an effort to better monitor the site and to be able to identify the culprits should they return.