by Jerd Smith | May 1, 2019 | Conservation and Efficiency, Economics and Finance, Infrastructure, Water Supply | 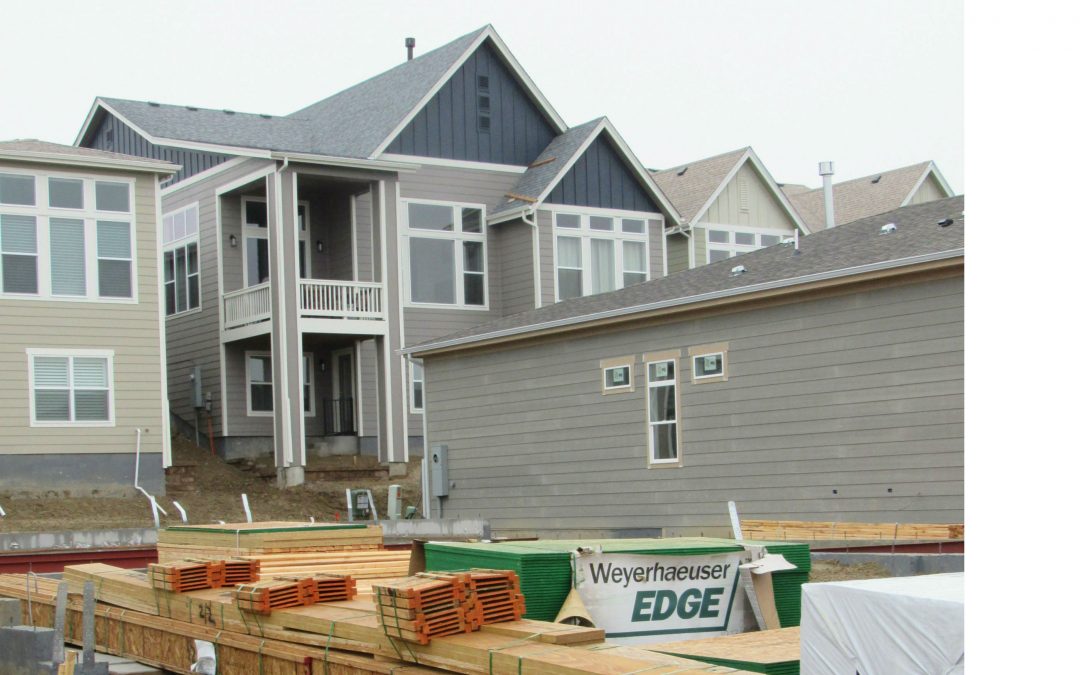 New homes going up in northwest Arvada. The city has said it won't allocate more water for new homes in this area because it wants to save its remaining water supplies for commercial development. May 1, 2019 Credit: Jerd Smith

Wholesale water prices on Colorado’s Front Range, those paid by developers and cities, are soaring and are now some of the priciest in the American West.

Driven by an ongoing housing boom, prices rose as much as 400 percent on the northern Front Range between 2011 and 2018, based on water sold from the Colorado-Big Thompson Project (C-BT), a federal water project that allows shares to be bought and sold in public transactions.

The project serves dozens of fast-growing cities along the Front Range, including Fort Collins, Longmont, Loveland, and Broomfield, among others. Its shares were once held primarily by farmers, but now cities dominate ownership.

During a similar period, sales prices on transactions at a water district in southern Colorado, the Twin Lakes Reservoir and Canal Company, rose just 36 percent according to a sales database compiled by WestWater Research Inc., a Boise, Idaho-based research and consulting firm.

The research was presented two weeks ago at the annual meeting of the American Water Resources Association Colorado chapter in Golden.

Brian Lewandowski is an economist with the University of Colorado’s Leeds School of Business. He said it’s not surprising that water prices are rising at such a rapid pace. “We’ve definitely been one of the fastest growing states with one of the hottest economies in the nation. As population and employment grows along the metropolitan Front Range, cities are bidding for and buying an ever more scarce resource.”

WestWater’s lead researcher on the study, Brett Bovee, said the high cost of housing is driving much of the increase. As long as developers can continually raise the price of a home, they can afford to spend more on scarce water supplies, he said.

If housing prices start to flatten, and developers can no longer charge enough to cover the higher prices for water, then the wholesale cost of water will begin to stabilize, Bovee said.

“Prices are going up because we’re growing so much,” said Bovee, who is based in WestWater’s Fort Collins office. “If water just got too expensive and they [developers] didn’t think they could make their project work, then the appreciation in water we have seen would slow down. We haven’t been at a point where houses are too expensive for people to buy yet.”

Though housing prices have begun to stabilize in some parts of the Front Range, including Denver, that doesn’t offset the nearly doubling in housing prices that has occurred since 2010, according to the Schiller Price Housing Index. The index, which covers metro Denver, rose from 127.8 in 2010 to just under 250 by 2018.

The City of Greeley requires developers to buy water and dedicate it to the city, or developers can pay the city $31,000 per acre-foot in lieu of bringing in so-called wet water. Wholesale water prices on the Front Range have risen so rapidly in recent years that Greeley, which once used the cost of C-BT water as a benchmark for setting those cash-in-lieu fees, no longer does so because it was simply too high.

“It was escalating so rapidly that it was challenging for developers to get water and it was not helping us with affordability,” said Sean Chambers, director of Greeley’s water and sewer department.

Examining other Western states, Bovee found that while small volumes of water were being sold at Colorado’s price levels, the vast majority  in other states, such as California, Nevada, New Mexico and Washington, were occurring at much lower prices.

“Colorado’s Front Range is the most active, high-priced market in the country,” Bovee said.

Another factor feeding the pricing frenzy is the proximity of farms to urban areas. Colorado’s agricultural lands typically have valuable water rights attached to them that farmers can sell if they choose, and many have. Farm debt is rising as well, reaching levels not seen since the 1980s, according to Bovee, which makes the sale of water rights more attractive to farmers.

One reason wholesale water prices aren’t lower in Colorado is that utilities historically have been reluctant to lease water, driving up demand for sales. In other Western states, most cities use at least some leased water in their portfolios, an option that lowers cost. Leased water is often available for as little as $500 an acre-foot, Bovee said

But in Colorado, where high-quality water has been relatively easy to buy outright up until recently, utilities have opted to minimize their risk through buying rather than leasing water, even though costs are substantially lower with leasing, Bovee said.

“Utilities’ one job is to provide super reliable water to their customers. Leasing adds risk to that mission,” Bovee said. Leases are usually established for a limited period of time, say 10 years.

Some communities have begun applying the brakes to the housing boom because of concerns about water. Arvada is close to maxing out its water supplies and is relying on the planned expansion of Denver Water’s Gross Reservoir to supply the additional 3,000 acre-feet of water it needs to reach build-out, the point at which all of the city’s open land has been developed. To ensure the water is used well, the city has said that it will not provide any additional water for some large residential developments, such as Candelas, in the northwest corner of the city.

“While we have a little bit more water, we’re tying that to commercial [uses], even though we know people want to build more houses out there,” said Ryan Stachelski, Arvada’s community and economic development director.

There is some irony to the frenetic water market, according to WestWater’s research. Even as Colorado has endured what is now an 8-year boom cycle, its water use has actually declined, driven by city-based water conservation programs.

“It’s interesting,” he said. “We didn’t, as a whole, use any more water. We’re growing, but we’re using less.”