Last week’s snow gave Colorado holiday skiers plenty to rejoice over, but the state’s drought-hammered mountains and plains continue to see just average, and in some cases far below average, conditions.

“An average snow year is a whole heck of a lot of snow, even in a year when we’re below average. It’s a great year for skiing but it may or may not translate into a great year for water,” said Russ Schumacher, Colorado’s state climatologist.

As of Dec. 27, the statewide snowpack is registering at 102% of normal, according to the Natural Resources Conservation Service (NRCS).

And while that number doesn’t provoke much excitement among hydrologists, it is still substantially higher than it was at this time last year, when statewide snowpack was just 74% of normal, according to Karl Wetlaufer, a hydrologist and assistant snow survey supervisor at the NRCS in Lakewood.

Mountain snow levels are tracked closely because when they melt, they provide much of the state’s annual water supplies. Hydrologists, using a time period known as the water year that begins Oct. 1, begin monitoring with the first snows in the late fall, and continue through May 1 when the spring melt and runoff begin. Spring snowstorms can sometimes dramatically boost the water forecast, though there is not much hope for that this year.

Colorado and much of the American West remain mired in a devastating drought, thought to be the worst in 1,200 years. But thanks to a third year of what’s known as a La Niña weather pattern, in which warm temperatures in the Pacific bring heavy moisture over the northern parts of the Rockies, Colorado’s northern regions are seeing above average snowpacks. 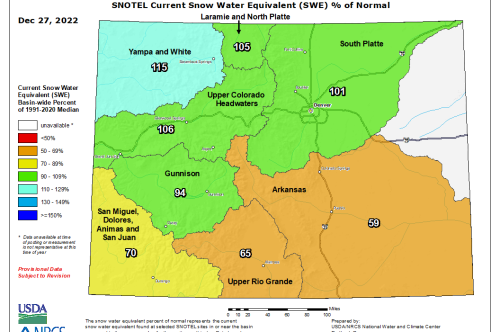 “In general, Northern Colorado has been faring quite a bit better with regard to snowpack accumulation than the southern parts of the state,” Wetlaufer said.

And as has been the case for the last several years, the southern part of the state is suffering the most.

The Rio Grande Basin, for instance, is at just 65% of normal, while the San Miguel-Dolores Basin stands at 70% of normal. The Arkansas River Basin is the lowest of anywhere in the state, at 59%.

With the winter off to a just-okay start, there is some good news. This past summer’s monsoons helped boost soil moisture levels to their highest point in eight years, and that means as snows start to melt next spring more of the water should find its way into streams and reservoirs, rather than being absorbed by the ultra-dry soils that have become a hallmark of this drought.

“It is really, really encouraging that we are going into the season with substantially more soil moisture,” Wetlaufer said.

In addition, the U.S. Drought Monitor shows that much of Colorado is pulling out of the most severe stages of drought, with portions of the central mountains being completely free of drought, and the West Slope and Front Range showing just abnormally dry to moderate drought levels. Drought ranging from severe to exceptional still remains across most of the Eastern Plains.

The warming climate and the stubborn drought continue to keep hydrologists and weather watchers on high alert.

The Colorado River’s two giant reservoirs, lakes Powell and Mead, are at critical lows and even an average snowpack this year isn’t going to provide much help, Schumacher said.

“Here in Colorado our water is very much determined by how much snow we get in any individual winter,” said Schumacher. “But the situation in lakes Powell and Mead is that we need year after year of way above average snowpack and that does not appear to be the pattern that we are in.

“The way that weather and climate has been going in the last 20 years is not in our favor,” he said.