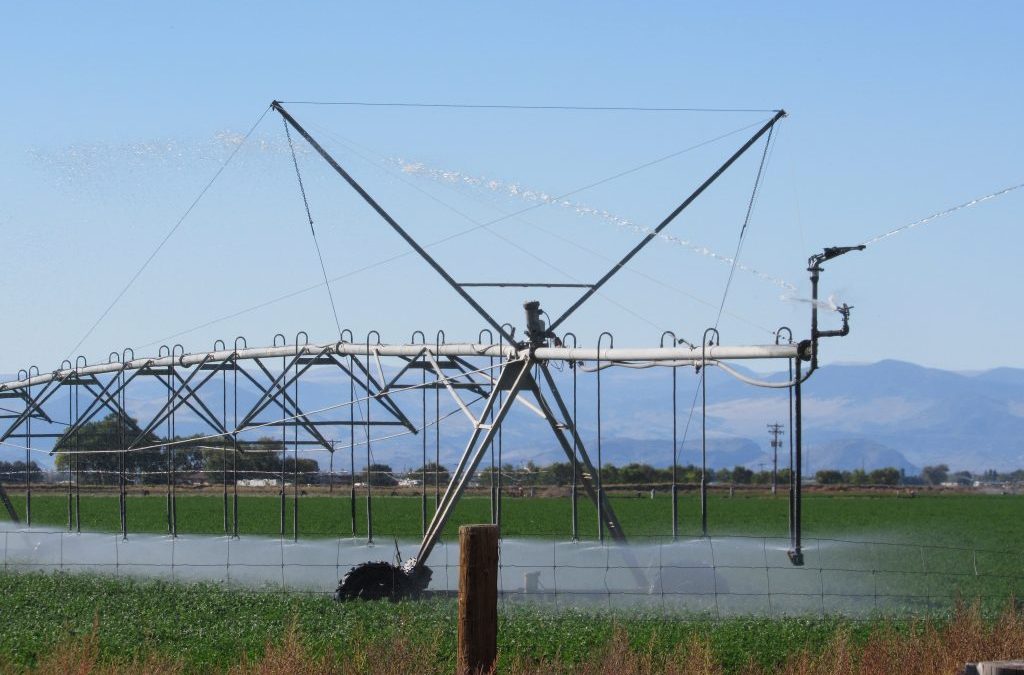 A center pivot irrigates a field in the San Luis Valley, where the state is warning farmers that a well-shutdown could come much sooner than expected. Credit: Jerd Smith

The race against time continues for farmers in southern Colorado’s San Luis Valley, with the state’s top water regulator warning that a decision on whether hundreds of farm wells will be shut off to help save the Rio Grande River could come much sooner than expected.

July 28, at a virtual symposium on the Rio Grande River, the state warned growers that they were running out of time to correct the situation.

“We’ll see in the next couple of years if we can turn around this trick,” said State Engineer Kevin Rein. “If we’re not turning it around, we need to start having that more difficult conversation.”

The valley is home to the nation’s second-largest potato economy and growers there have been working voluntarily for more than a decade to wean themselves from unsustainable groundwater use and restore flows in the Rio Grande. Thousands of acres of land have been dried up with farmers paying a fee for the water they pump in order to compensate producers who agree to fallow land.

The San Luis Valley, which receives less precipitation than nearly any other region in Colorado, is supplied by the Rio Grande, but under the river lies a vast aquifer system that is linked to the river. It once had so much water that artesian springs flowed freely on the valley floor.

As modern-day farmers began putting powerful deep wells into the aquifer, aquifer levels declined, and flows in the river declined too as a result, hurting the state’s ability to deliver Rio Grande water downstream to New Mexico and Texas, as it is legally required to do.

Between July 2019 and July 2020 the valley’s unconfined aquifer, which is fed by the Rio Grande River, dropped by 112,600 acre-feet. All told the aquifer has lost around 1 million acre-feet of water since the drought of 2002.

Through a plan written by growers in the valley and approved by the state in 2011, farmers had 20 years, from 2011 to 2031, to restore the aquifer. But multiple droughts in the past 19 years have made clear that the region can’t rely on big snow years to replenish the valley’s water supplies because there are fewer of them, thanks to climate change.

“So what is the future, the short-term future, if we can’t count on climate? And let’s admit we can’t,” Rein said. “If climate’s not cooperating the only thing that can be done is consuming less water.”

Adding to pressure on the region is a proposal by Denver developers to buy thousands of acres of the valley’s farm land, leaving some of the associated water rights behind to replenish the aquifer, while piping thousands of acre-feet of water northeast to the metro area.

Rein said drastic steps, like drying up more fields and sharply limiting how much growers can pump, are needed. But this could result in bankruptcies and could cripple the valley’s $370 million agriculture economy, which employs the majority of workers in the region. Worse still, though, would be the shutdown of all wells in the region, which is what could occur if farmers aren’t able to make progress toward aquifer sustainability.

While the deadline to restore the aquifer is set for 2031, if it becomes clear before then that growers aren’t able to restore groundwater levels, Rein will be forced to take action early by turning off all wells.

Rein said his decision likely won’t come as early as next year. But, he said, “Do we wait until 2031, the deadline? Probably not.”

The groundwater challenges and associated deadline stem from Colorado’s historic 2002 drought which led to more groundwater pumping than ever before and resulted in a falling water table, decreases in water pressure, and failing wells.

Groundwater declines have been so severe that they’ve affected surface water levels in parts of the valley. In 2004, state lawmakers passed a bill requiring the state to begin regulating the aquifer to make it more sustainable.

Landowners within the Rio Grande Water Conservation District (RGWCD) responded by forming a groundwater management district known as Subdistrict 1—that was just the first of what will soon be seven approved subdistricts.

Subdistrict 1 set goals and developed a plan of water management in late 2011 that spelled out how to reduce groundwater depletions and recharge the aquifer.

In 2012 they began paying a fee for every acre-foot of water used. That revenue helps pay irrigators who elect to participate in voluntary fallowing programs and other efforts to replenish the river and reduce stress on the aquifer.

And by 2017, irrigators had restored 350,000 acre-feet of water in the aquifer, halfway to their goal. But drought and disaster struck in 2018. With less surface water available and high temperatures, irrigators pumped heavily to maintain their crops. And by September 2018, farmers had lost about 70 percent of the groundwater gains they had worked so hard to recover.

“2018 was extremely frustrating,” said Cleave Simpson, manager of the RGWCD who is also a fourth-generation grower. ”It really kind of set us back to where we were when we started this in 2012.”

It’s not over yet. Some of that groundwater lost in 2018 has been recovered and this year participation in the fallowing program is higher than ever, with more than 13,000 acres enrolled, according to Amber Pacheco who manages the RGWCD’s subdistrict programs—that’s in addition to the 8,800 acres fallowed through the conservation programs that have been running since 2012.

Simpson and others, faced with another severe drought year, are deeply worried about the success of their conservation efforts, but dire times are also boosting motivation to solve the problem, Simpson said.

“There’s a sense of urgency from the board of managers that we’ve got to keep doing more,” Simpson said. “We’ve got to get back what we lost.”

Caitlin Coleman is the Headwaters magazine editor and communications specialist at Water Education Colorado. She can be reached at caitlin@wateredco.org.