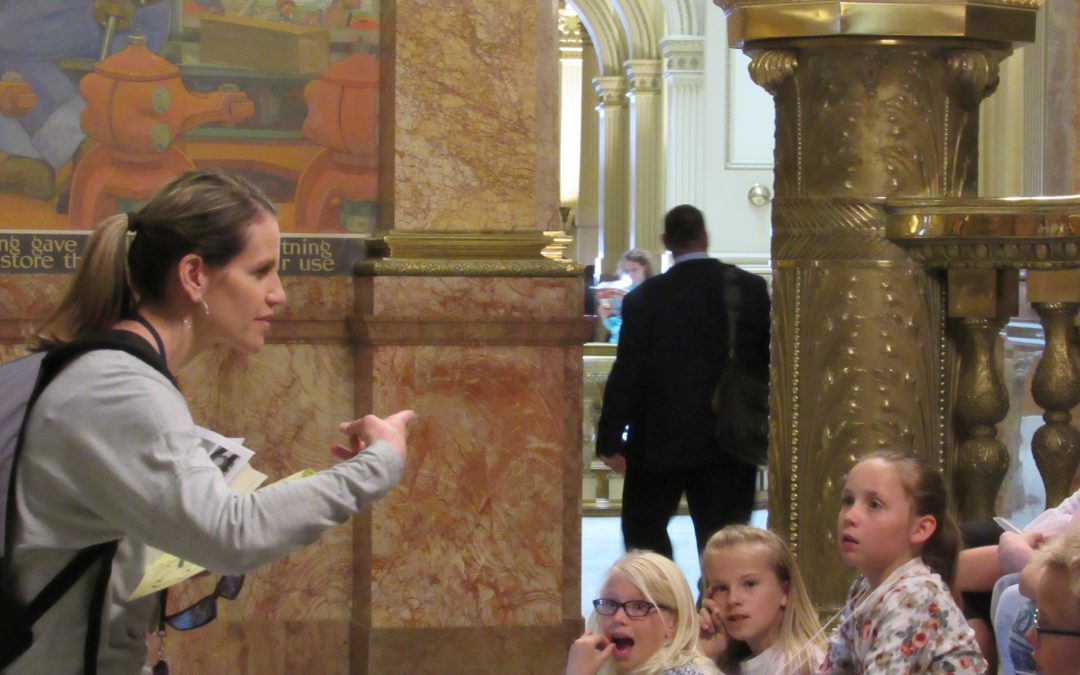 Trout Core Knowledge Teacher Courtney Petros discusses the work of Colorado lawmakers with her fourth grade students on May 3, the last day of the session. The Fort Collins school brings students to the legislature each year on closing day. Credit: Jerd Smith

It put off for now another bill that would have expanded the state’s nationally recognized instream flow program, which allows water for fish and aquatic habitat to be left in streams.

Faced with a 19-year drought that has seen storage in the Colorado River’s two largest reservoirs—Powell and Mead—drop below half full, the legislature took a first step in reducing water use to ensure compliance with the Colorado River Compact. Although it did not adopt new policy, it appropriated $1.7 million as part of Senate Bill 212 for the Colorado Water Conservation Board (CWCB) to explore a demand management program that would incentivize voluntary cutbacks of Colorado River use, where saved water could be stored in Lake Powell as a hedge against future shortfalls. It also set aside $8.3 million to fund the Colorado Water Plan. The combined $10 million lawmakers approved is far less than the $30 million Governor Jared Polis had requested, but the Joint Budget Committee (JBC) pared that figure due to competing demands from other big ticket items. Senator Bob Rankin (R-Carbondale), the bill’s chief sponsor and a JBC member, noted that the remaining $20 million in Polis’ original request “was really meant to be a contingency plan against demand management in the future and so it could probably wait until next year to be appropriated.” That is if revenue forecasts allow.

Still Rankin said the funding is an important step forward for the water plan. “This is the first time we’ve started to put general fund money against the water plan.”

House Bill 1029 incorporates the groundwater boundary agreed to by Kansas, Nebraska and Colorado in a Supreme Court settlement and allows the district to assess the same fee on those well owners that it does on all irrigators in the district. Those fees help to pay for a pipeline that transports conserved groundwater to the river to ensure compact compliance.

The district borrowed $62 million to buy water rights and build the pipeline, and has assessed farmers $14.50 per acre annually to repay the loan. Absent the legislation, wells that do not have water augmentation, or replacement, plans to mitigate their surface water depletions could face curtailment under new rules issued by the state engineer; now they are automatically part of the district’s approved augmentation plan.

The General Assembly passed another bill that changes the timing of severance tax allocations that support several water programs to allow for better planning and budgeting. Currently the tax revenue is transferred three times a year to the CWCB based on revenue forecasts; if the actual tax collections are less than forecasted (which has often been the case), funds have to be taken back. Senate Bill 16 bases allocations on the amount collected in the previous fiscal year and consolidates three payments into one for distribution the following year. Because tax collections in 2018 exceeded forecasts, there’s enough revenue available to avoid any funding gap moving forward.

The General Assembly passed a bill to protect water quality from the impacts of hard-rock mining. House Bill 1113 requires reclamation plans for new or amended hard-rock mining permits to demonstrate a “reasonably foreseeable end date” for water quality treatment to ensure compliance with water quality standards. It also eliminates the option of “self-bonding”—an audited financial statement demonstrating that the mine operator has sufficient assets to meet reclamation responsibilities—and requires a bond or other financial assurance to guarantee adequate funds to protect water quality, including treatment and monitoring costs.

Representative Dylan Roberts, (D-Eagle), the bill’s prime sponsor, emphasized that it applies only to hard-rock mining—not to coal or gravel mining—and “aligns statute with what’s already happening in current practice by the Division of Reclamation, Mining and Safety…so that we can avoid creating more chronically polluting mines.” The bill was similar to one that passed the House but failed in the Senate last year.

The Senate Agriculture & Natural Resources Committee set aside a bill that would have expanded an existing program to protect streamflows for environmental purposes, but with a commitment to study the issue further this summer. Under current law, a water right holder can loan water to the CWCB to boost instream flows in stream reaches where the CWCB holds an instream flow water right. The loan may be exercised for no more than three years in a single 10-year period. House Bill 1218, which had passed the House earlier in the session, would have increased the number of years the loan could be exercised from three to five, and permitted a loan applicant to reapply to the state engineer for two additional 10-year periods.

Opposition to the bill centered on concerns that expanding the number of years would reduce irrigation return flows to other farmland dependent on them for crop production and risk damaging soils. Senator Kerry Donovan (D-Vail), the bill’s sponsor and a rancher, asked the committee to postpone it with an understanding that the Interim Water Resources Review Committee would study it further this summer. She noted that with “some of the concerns that have been raised, as well as the level of attention that this issue deserves, we need to get this right, and I’m not sure we have consensus on a way forward today.”

Fresh Water News is an independent, non-partisan news initiative of Water Education Colorado. Learn more at www.watereducationcolorado.org. WEco is funded by multiple donors. Our editorial policy and donor list can be viewed at wateredco.org.

Correction: In an earlier version of this story, the photo caption misspelled the name of Traut Core Knowledge School.