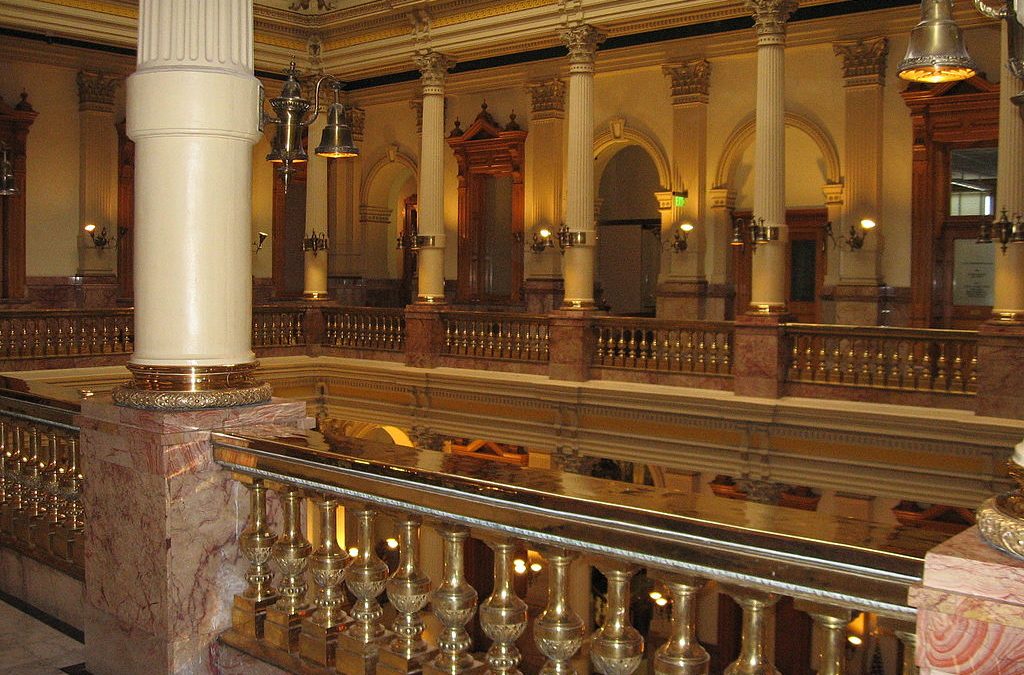 Colorado River drought planning as well as the funding dilemma behind the state’s ambitious water plan, are among the water issues likely to win stage time at the Colorado State Capitol this year.

When the session opens Friday, Democrats will control both chambers, having retained the majority in the House of Representatives and taken control of the Senate as a result of the November elections.

800-Pound Gorilla in the Room

There is one major issue that will loom over this session even without legislation—the Colorado River drought. In November, the Colorado Water Conservation Board, the state’s lead water policy and planning agency, adopted a critical policy statement supporting a Colorado River Drought Contingency Plan (DCP). Once the plan is finalized, a process that could take months, it may require lawmakers to act.

The policy comes in response to a 19-year drought in the Colorado River Basin that has seen storage in its two largest reservoirs—Lake Powell and Lake Mead—drop below 50 percent of capacity. Continued drought could lead to water cutbacks in the Upper and Lower Colorado River Basins in order to comply with the 1922 Colorado River Compact and related agreements. The Upper Basin comprises Colorado, New Mexico, Utah and Wyoming, while the Lower Basin states include Arizona, California and Nevada.

Included in the DCP is discussion of a far-reaching conservation effort in Colorado and the other Upper Basin states that would free more water for storage in a protected pool in Lake Powell to ensure Lower Basin states receive their legal allotment.

Under the new policy adopted by all four Upper Basin states and the Upper Colorado River Commission, any demand management program would emphasize voluntary, temporary and compensated reductions in water use, and would not be implemented without an extensive public review process.

If it comes to actual cutbacks, water users across the state would share the pain, including Front Range communities, under the new policy.

Despite these assurances, there is a great deal of legislative concern, especially over the potential role of the federal government in deciding if and when to release water from Upper Basin reservoirs to replenish Lake Powell. Sen. Don Coram (R-Montrose) likened it to “depositing money into a bank account [Lake Powell] and authorizing someone else [the Bureau of Reclamation] to make withdrawals.”

The crisis on the Colorado River is likely to serve as context for several water policy discussions this session, though Rep. Roberts said, “There won’t be any rush to legislation.”

Donovan said lawmakers would be fully briefed on the drought plan, “and then we will be able to proceed to consider appropriate actions to put the state in the best position to comply with the Colorado River Compact.”

Another high priority will be examining ways to fund Colorado’s Water Plan (CWP). The CWP was prepared by the Colorado Water Conservation Board (CWCB) at the direction of Governor John Hickenlooper and adopted in 2015. It contains eight measurable objectives—including new water storage, maintaining agricultural productivity, and improving watershed health. It also includes critical actions to achieve them.

The plan cites a need to raise $100 million annually over 30 years—or $3 billion from 2020-2050—to sustainably fund its implementation. It suggests a loan repayment guarantee fund and “green” bonds for environment, recreation, conservation, agriculture and education activities. Not all funding would come from the state; storage projects often rely on ratepayers to cover the costs of water development and delivery.

Legislators are expected to explore funding options for structural and nonstructural projects. The CWCB has included $20 million for CWP implementation in the 2019 “Projects Bill” that will be submitted to the legislature for approval. That is $9 million more than in 2018.

Another bill that has been forwarded to lawmakers from the 2018 interim Water Resources Review Committee would redraw the boundary of the Republican River Water Conservation District in eastern Colorado to include more wells that reduce the flow of the Republican in violation of a compact with Kansas and Nebraska. The bill would allow the district to assess the same fee on those well owners that it does on all irrigators in the district to pay for a pipeline that transports water to the river to ensure compact compliance. The district borrowed $62 million to buy water rights and build the pipeline, and has assessed farmers $14.50 per acre to repay the loan.

Lawmakers will also consider a bill that would change the timing of severance tax allocations for several CWCB water programs, to allow for better planning. The state collects severance taxes from oil and gas producers and other extractive industries, some of which is used to support water-related activities.

Currently the state’s severance tax revenue is transferred three times a year to the CWCB based on revenue forecasts; if the actual tax collections are below forecasts (which is often the case), funds are “clawed” back. This bill would base allocations on the amount collected in the previous fiscal year and consolidate three payments into one for the following year. Because tax collections in fiscal year 2018 exceeded forecasts, “it gives us a moment in time to do this,” Donovan said, avoiding any gap in funding.

Still another issue likely to surface is how to encourage more deficit irrigation, a strategy that applies less water than optimally needed by a crop in order to free up water for other uses. One proposal that did not make it out of the summer interim water committee would have added deficit irrigation to land fallowing as a type of pilot project the CWCB could approve, with the conserved water being available for short-term lease. Although the bill received support from a majority of committee members, it did not garner the two-thirds necessary to advance as a committee-sponsored bill. It may be considered again this year. (A similar bill—HB 1151—passed the House in 2018 but was withdrawn by its senate sponsor for additional study.)

There is also interest in legislation that could expand the state’s instream flow pilot program, where water right holders forego diversions, instead leaving their water in the stream on a short-term basis for fish and habitat protection without jeopardizing their water right. The program is voluntary, temporary, and can provide financial compensation. It may involve “split-season” use, where a farmer irrigates his or her crops early in the season and then leases the water to a nonprofit (in partnership with CWCB) to maintain instream flows later in the year. Although the committee did not report out a bill on this issue, there is reportedly interest in legislation that would encourage additional voluntary leasing while protecting agricultural water use.

And last but not least, the General Assembly is expected to renew consideration of a measure it rejected in 2018. Lawmakers considered HB 1301, which would have required reclamation plans for new or amended hard-rock mining permits to demonstrate an “end date” for water quality treatment to ensure compliance with water quality standards. The bill also would have eliminated the option of “self-bonding”—an audited financial statement that the mine operator has sufficient assets to meet reclamation responsibilities—and required a bond or other financial assurance to guarantee adequate funds to protect water quality, including treatment and monitoring costs. It passed the House but was defeated in a Senate committee. Rep. Roberts, the primary sponsor last year, expects a bill on the same topic this session.

Correction: An earlier version of this story misidentified the chair of the House Rural Affairs Committee.