It’s official: Colorado is drought free, but its reservoirs not so much

Colorado is officially drought free this month, but the state’s reservoirs are still struggling to recover, with statewide storage registering just 90 percent of average, well below the 111 percent mark it registered last year on April 30.

Thanks to a big-snow kind of winter and cool, wet spring, Colorado has joined other Western states such as California and Utah in casting aside last year’s devastating dry spell. According to the U.S. Drought Monitor, every region of the state is drought free, although small portions along the southern border and spots on the Eastern Plains remain what the monitor calls “abnormally dry.”

In response to the dramatic improvement, the state’s Water Availability Task Force recommended this week that the state lift the drought designation it assigned to 40 of the state’s 64 counties last year, including large swaths of the southern parts of the state and the West Slope.

Taryn Finnessey, chair of the task force and a climate change specialist for the Colorado Water Conservation Board, said its recommendation must still be approved by Gov. Jared Polis.

Looking ahead, Finnessey sounded a cautionary note. “Just because we had a good snow year doesn’t mean we couldn’t turn right around and start drying out again. We live in a semi-arid environment, and in nine out of 10 years we have some level of drought.” 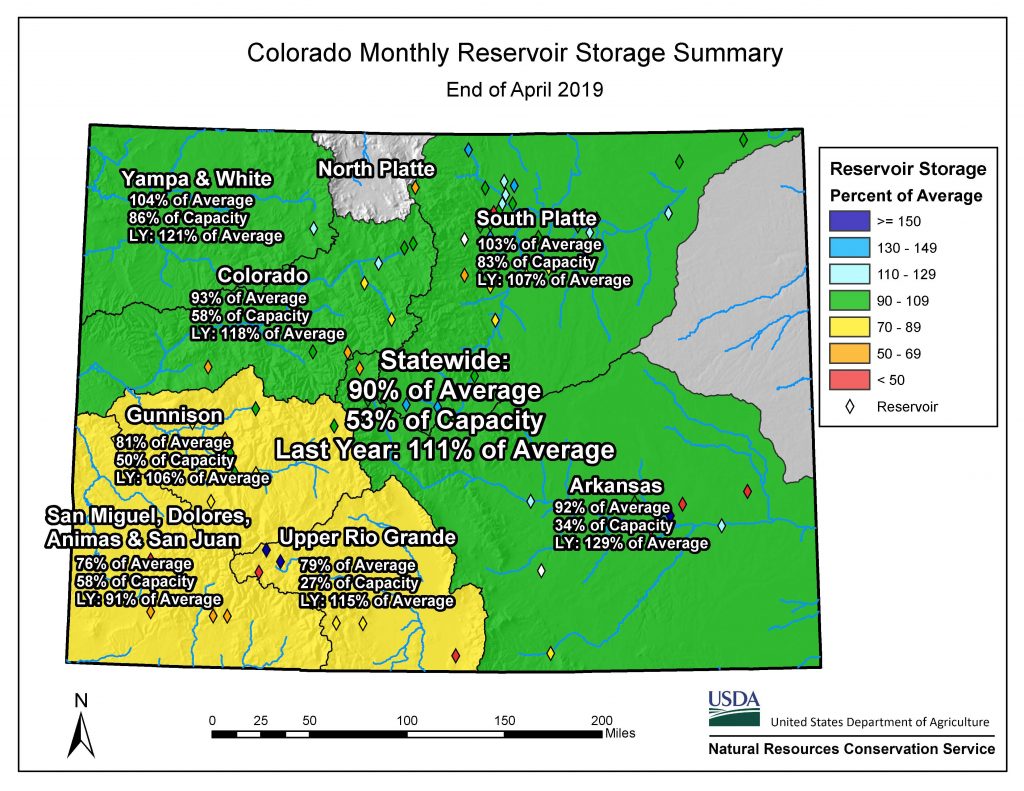 “They are still low,” said Karl Wetlaufer, hydrologist at the Natural Resources Conservation Service Snow Survey, which tracks snowpack and reservoir levels across the West. “But it’s a huge turnaround from last year.”

After experiencing the second-driest water year on record in 2018, Colorado was desperate for more water.

This winter it arrived in the form of luxurious, thigh-deep snows that in some regions topped 150 percent of average. Major water systems, including Denver Water, Northern Water and Aurora Water, expect to see their reservoirs fully recover once mountain snows melt this summer, despite being substantially behind last year’s spring storage levels.

On the West Slope, many small reservoir systems are also expected to recover completely.

Key to that happening however, is receiving what hydrologists call a “well-behaved” runoff season. Like most Western states, Colorado’s biggest water storage system is its snowpack. This year’s is plenty deep, but if it melts too quickly, it will be difficult to capture.

“If it hits 90 degrees and stays there for the week, all this water will run by us,” Clever said.

Aurora, which has 12 storage reservoirs, is also hoping that the big melt comes in a gentle way. Its reservoirs stand at just 61 percent of average.

“We anticipate that our storage will be full this year,” said Aurora spokesman Greg Baker. “But we’re hoping for a cool late spring, so the runoff doesn’t occur too fast. We like to use the snowpack as our 13th reservoir.”

Peter Goble, a specialist with Colorado State University’s Colorado Climate Center, said early signals indicate Colorado is likely to have a wet, warm summer, which would be good news for the fire season and for reservoir storage.

Still major reservoirs in the region aren’t expected to refill.

Lakes Powell and Mead, the largest reservoirs in the nation and the primary savings accounts for the drought-stressed Colorado River system, are expected to see only modest gains from this year’s deep snows, possibly nearing the half-full mark, according to the U.S. Bureau of Reclamation.

But in a surprise move, Colorado’s Blue Mesa Reservoir, the state’s largest storage pool, is likely to see a huge turnaround.

“A month ago, we gave it no chance to refill,” said Erik Knight, a hydrologist with the Bureau of Reclamation. “But when the May 1 forecast came out, the picture changed. Now we think there is a pretty good chance it will fill.”

Fresh Water News is an independent, non-partisan news initiative of Water Education Colorado: watereducationcolorado.org. WEco is funded by multiple donors. Our editorial policy and donor list can be viewed at wateredco.org.