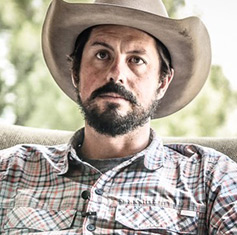 “When we work in partnerships I’ve yet to see a day you don’t find solutions.” Paul Bruchez, Grand County cattle rancher and fly-fishing operator, serves as project manager for a 12-mile restoration project on the Colorado River involving 12 landowners. His ancestors were Eastern Slope corn, wheat, alfalfa and grass hay farmers in the early 1900s on 240 acres of land that is now located within the urbanized area of Westminster. His parents, Art and Roberta Bruchez, moved their three sons to Grand County two decades ago. Grand County is the epicenter of major historical events in Colorado water history.

Denver and Northern Water transbasin diversion projects through the Moffat and Adams tunnels in the latter half of the 20th Century heavily stressed Grand County headwater streams, while greatly benefitting Eastern Slope farms and cities. The 2005 Water for the 21st Century Act, sponsored by House Speaker Russ George of the Colorado General Assembly, permanently put in place nine basin roundtables and the Interbasin Compact Committee. This entirely new process for Colorado water planning has brought forth many new voices, like Paul’s.

Just after he received his 2003 degree in Business Administration from the University of Denver, Paul’s family acquired two miles of mainstream Colorado River bottomland property between the towns of Granby and Kremmling. They also lease ranchland and water rights from Denver on the Williams Fork River, a significant tributary to the Fraser River above its confluence with the Colorado River. Together the family works nearly 6,000 acres of land. This places Paul and his brother Doug, who co-manages the land and water rights, squarely within the working wheelhouse of Grand County’s agricultural and recreational economy.

Paul is an agricultural representative of the Colorado River Basin Roundtable and a member of the Compact Committee. He also chairs Grand County’s Open Lands, Rivers and Trails Advisory Committee and is a member of the Colorado Water Trust Board. Extensive interpersonal partnership building among local agriculture, local government, water providers, and conservation groups led to the Colorado River Headwaters Project. Its collaborative purpose, Paul explains, is to “sustain agriculture and the environmental health of the river.” Paul’s family participates in a conservation easement that protects Sage Grouse and a critical elk migration habitat across the Colorado River.

The Colorado River Cooperative Agreement with Denver and Northern obtained 47 signatures. A learning-by-doing set of adaptive measures is built into Grand County’s House Bill 1041 permits for Denver Water’s Gross Reservoir enlargement in Boulder County and Northern Water’s Chimney Hollow Reservoir in Larimer County. These projects are included in Colorado’s Water Plan to meet the state’s future needs. Northern’s commitments include re-designing the Windy Gap diversion on the Colorado River. A connecting channel will go around the Windy Gap Reservoir and water stored in Granby Reservoir will be released into the Colorado River to boost flows and cool temperatures in the river.

Paul and his wife have the joy of daughter Madeline, born during a December 2017 blizzard, with whom to share the family’s East Slope/ West Slope water heritage, over a century and a quarter’s worth!