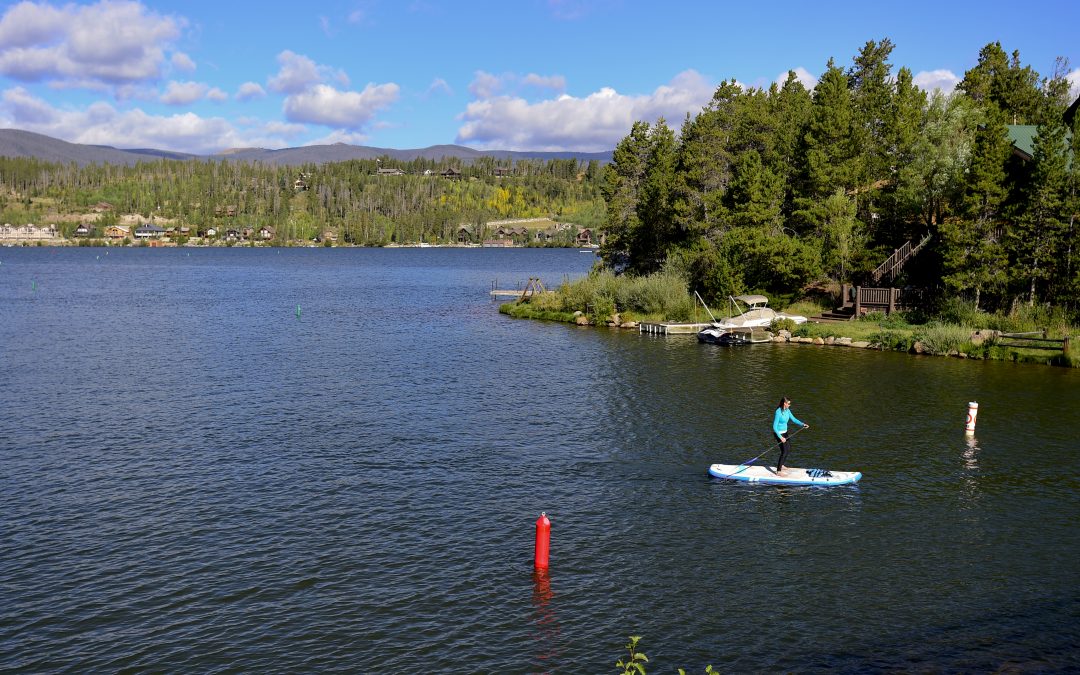 A woman paddles on Shadow Mountain Reservoir, which is caught in federal stalemate over how to improve water quality to help improve its neighboring Grand Lake. Credit: Daily Camera

Frustrated and worried about the future, Grand Lake locals are asking the state to intervene to break through a log jam of federal and environmental red tape that has prevented finding a way to restore the lake’s clarity and water quality, despite a 90-year-old federal rule known as Senate Bill 80 requiring that the work be done.

At issue: Grand Lake serves as a key element of Northern Water’s delivery system, which provides water to more than 1 million people on the northern Front Range and thousands of acres of irrigated farmlands.

Owned by the U.S. Bureau of Reclamation and operated by Northern Water, what’s known as the Colorado-Big Thompson Project gathers water from streams and rivers in Rocky Mountain National Park and Grand County, and stores it in man-made Lake Granby and Shadow Mountain Reservoir. From there it is eventually moved into Grand Lake and delivered via the Adams Tunnel under the Continental Divide to Carter Lake and Horsetooth Reservoir,  just west of Berthoud and Fort Collins respectively.

During that process, algae, certain toxins and sediment are carried into Grand Lake, clouding its formerly clear waters and causing algae blooms and weed growth, and harming recreation.

In a hearing before the Colorado Legislature’s Interim Water Resources and Agriculture Review Committee on Aug. 4, Mike Cassio, who represents the Three Lakes Watershed Association in Grand County, pleaded with state lawmakers to intervene and launch a study process that would help trigger federal action.

“We have the highest respect for all of our partners,” Cassio said, referring to ongoing remediation efforts involving Northern Water and the U.S. Bureau of Reclamation.

“But due to the design of the system, you have this beautiful natural lake and then you fill it up with reservoir water. Usually, in July when spring runoff is going on, Grand Lake is flowing from east to west. It is extremely clear. But as soon as Shadow Mountain’s water sits and starts to cook and grow weeds and algae, and the pumps come on, this massive plume of nitrates, inorganics, just basic muddy water flows into Grand Lake,” Cassio said.

In 2008, the Colorado Water Quality Control Commission moved to set a clarity standard, but it has since been replaced with a clarity goal and the aim of achieving “the highest level of clarity attainable.” Instead of working under a regulated water quality standard, Northern Water and others have implemented different management techniques, including changing pumping patterns, to find ways to improve water quality in all three water bodies.

In 2016, the U.S. Bureau of Reclamation took the first steps required under the National Environmental Policy Act of 1969 (NEPA) to do the scientific and engineering studies and public hearings that would be required to fix the system. But Reclamation stopped the process in 2020, saying that it could not definitively establish any structural alternatives that would work, nor could it find a way forward on funding what could be a project that would cost hundreds of millions of dollars, according to Jeff Rieker, general manager of Reclamation’s Colorado Eastern Plains office.

During last week’s hearing, lawmakers said they want more information and that Northern Water’s system is too critical to the northern Front Range to do anything without careful consideration.

“We are in a moment of time like none other,” said State Rep. Hugh McKean, a Republican who represents Loveland and other northern Front Range communities. He cited the warming climate and the effects of the massive East Troublesome fire in 2020, which engulfed lands around the three lakes and created additional water quality problems, which still impact the watershed today.

“Is this the moment to create a long-term plan, when right now our water situation is in flux? I’m resistant to say let’s stop everything and study this,” McKean said.

“This is exactly the right time,” Kudron said. “Tourism impacts my community more than almost any other community in the state. One million people visited [Fort Collins’] Horsetooth Reservoir last year. Are we getting to the time when recreation on the East Side of the [Continental Divide] is more important than the West Side?”

“The [state's] clarity goal is 3.8 meters,” she said. “We don’t hit it every year, but we’re doing a lot better. Over the past 17 years we’ve met the 3.8-meter goal 35% of the time and in the past five years we’ve hit the goal 60% of the time,” she said. “But East Troublesome complicates everything. We are still trying to wrap our heads around what this means for the system.”

Still, she said Northern was committed to finding a path forward and indeed is legally obligated to do so under the terms of its operating contract with Reclamation.

What that path may look like isn’t clear yet. Lawmakers did not recommend any action in the form of bills to authorize a study after Thursday's hearing, according to interim committee staff.

But Grand Lake advocates say the state rightly should step in because it was the Colorado water users in Northern’s system that repaid the federal construction loans on the project.

“We have a lake unlike any lake in the country,” Kudron said. “The moment we start talking about closing the lake, it has a long rippling effect. There isn’t a Target [store] that will make up the tax dollars that would be lost. There are just 16,000 people in Grand County. If the natural resources that attract people to our county are interrupted, the county becomes interrupted. If we can’t rely on the water resource, we are in big trouble.”