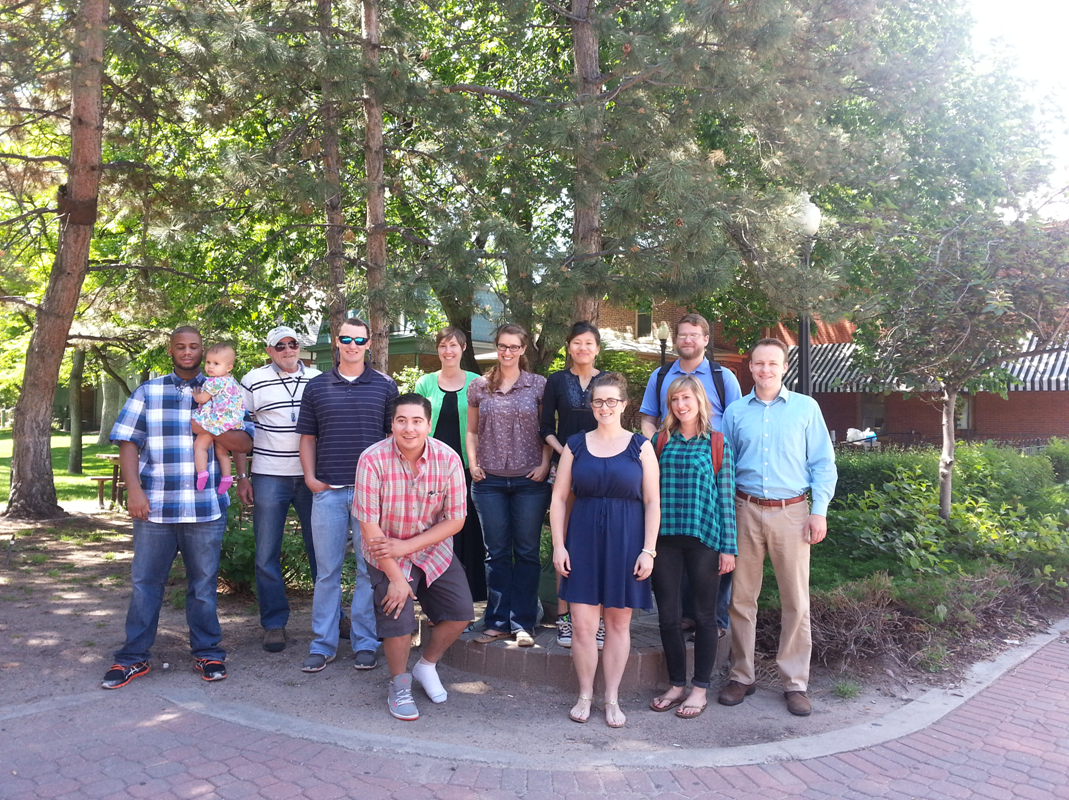 MSU Denver students, along with advice from Denver Water and the One World One Water Center for Urban Water Education and Stewardship (OWOW), created the first-ever comprehensive campus water management plan. The plan was the result from the ENV 290B Water Conservation Planning summer course. The students spent 8 hours a day, for two weeks, researching and creating the plan for the new applied-learning course. The final plan was unveiled to Mark Cassalia from Denver Water’s Conservation department, Nona Shipman and Tom Cech from OWOW, and Jon Bortles, the campus Sustainably Director. The plan received rave reviews and will be used to make much needed water conserving changes to the current campus water management plan.

The plan included data and mapping for outdoor water usage, indoor water usage, a drought response plan, a communication strategy, and further ideas on how to reduce potable water usage. The students enjoyed the course and are now Colorado water stewards.

The following two maps and descriptions were included in the students’ plan: 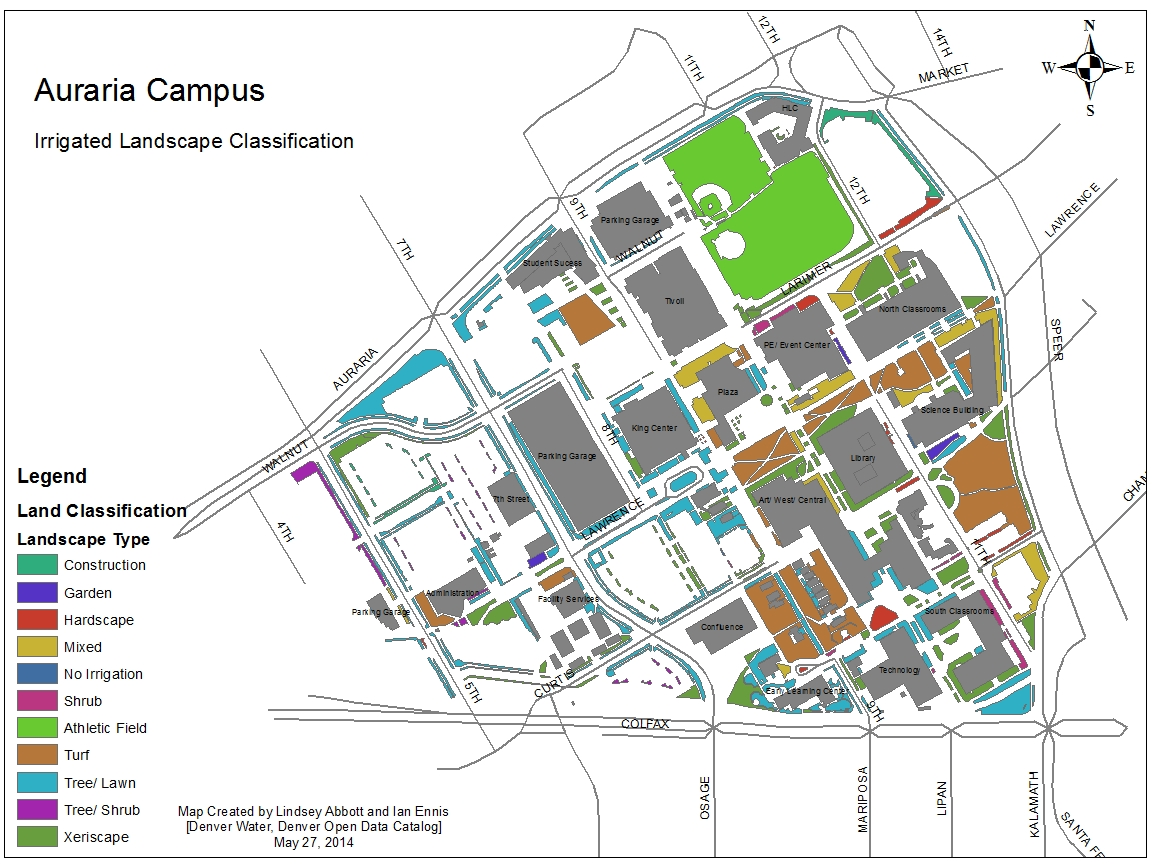 This map shows the landscape type of all irrigated land on Auraria Campus.

The above map shows the landscape type of all irrigated land on Auraria Campus. Each polygon is classified as one of the following: an area under construction, a garden, hardscaped, mixed, no irrigation, shrub, athletic field, turf, tree/ lawn, tree/ shrub or Xeriscape. To fully understand the classification scheme in the above the map, a few landscape types require further clarification. Mixed is defined as one land area that contains a combination of land covers, such as Xeriscape and tree/ lawn. It was defined due to a limitation within ArcGIS in that, each specific polygon could not be given partial or multiple classifications. Tree/ lawn is defined as a generally narrow strip of land, containing both trees and lawns; it is commonly found alongside public roads as it is a required by zoning regulations (which may be subject to change). Similarly, tree/ shrub is a type of land cover that generally exists in a narrow strip. However, rather than lawns, the base of the trees are surrounded by shrubs. Lastly, the term Xeriscape encompasses areas requiring substantially less water: native grass, native/ Xeric plants, mulch and/ or rocks. 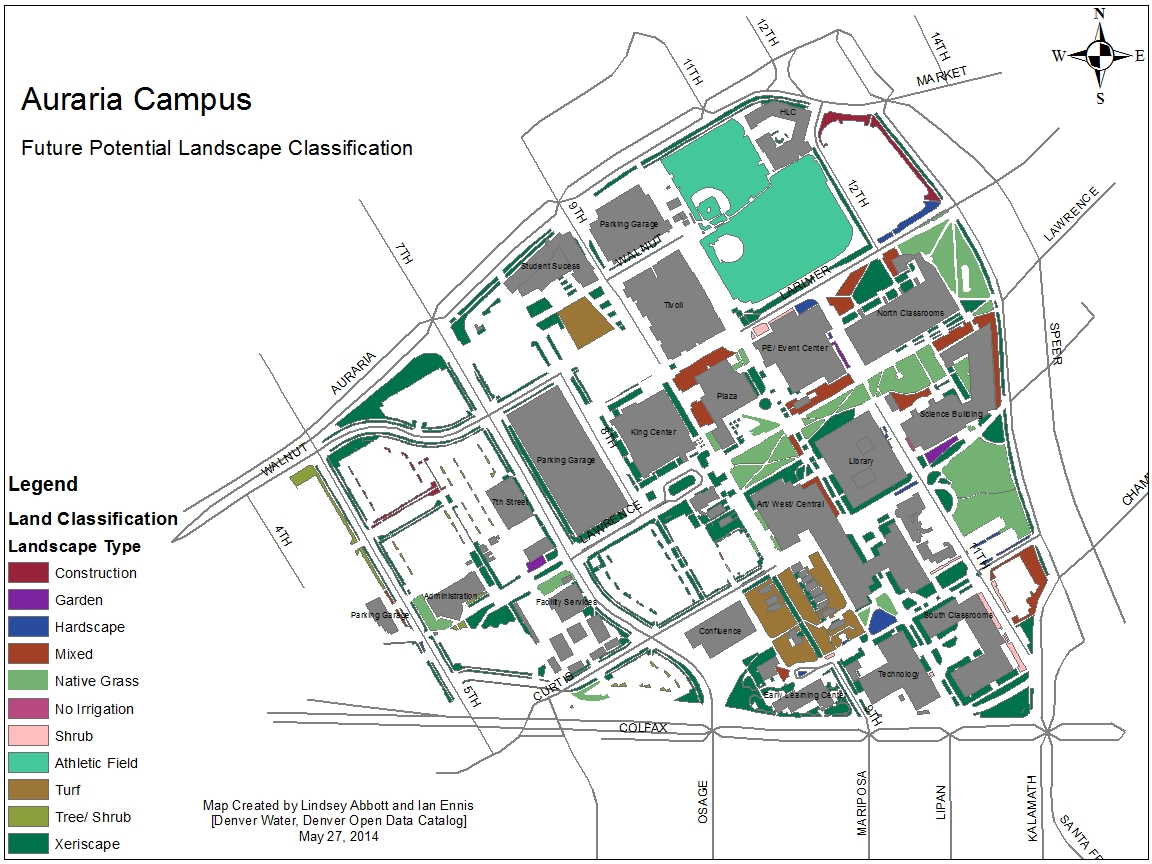 This Future Potential Landscape Classification map was created to recommend areas where implementing a more sustainable landscape could benefit the Auraria Campus.

The purpose of the Future Potential Landscape Classification map is to recommend areas where implementing a more sustainable landscape would be of benefit. Much of the irrigated land should ideally be converted using Xeriscape techniques in order to reduce water use while maintaining a naturally beautiful landscape. In this map, native grass has been listed as a separate category from Xeriscape, to clarify areas that should undergo turf removal, to be specifically replaced with a grass variety that require substantially less water. Two turf areas have been left intact: the turf in front of the Student Success building due to the intricate storm system located underneath it, as well as the turf surrounding the 9th Street Historic District.