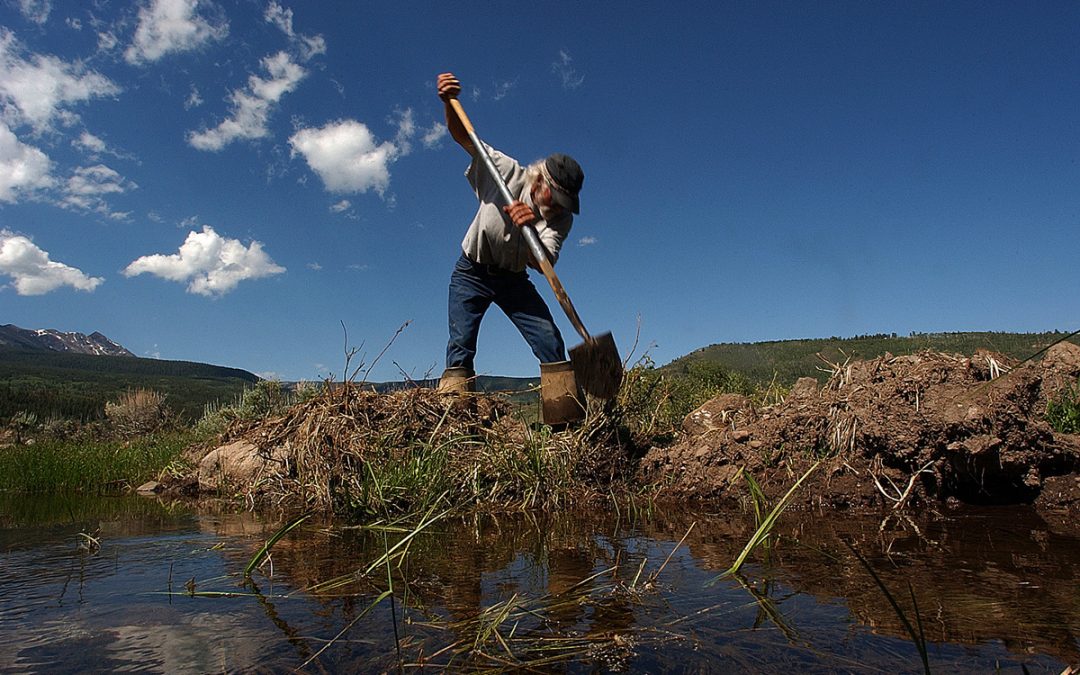 From a centuries-old “gentle art” to a modern form of water collective, these irrigators function almost like family.

Every March, in the tiny southern Colorado town of San Luis, some 25 representatives from 62 family farms attend a meeting at the old courthouse. They get down to business quickly— no refreshments or snacks.

First, they appoint a mayordomo, an irrigation expert who plots out a strict watering schedule for 1,062 acres of farmland along the San Luis People’s Ditch. The mayordomo spends the summer making sure all the farmers on the ditch get their fair share of water, and fixes problems with flooding by contacting a platoon of neighbors who come out with their shovels or, in extreme cases, finding somebody along the ditch who owns a backhoe. Sometimes the mayordomo has to contend with a group of renegade elk that jump over the fences surrounding the ditches.

“Mayordomos are homegrown,” says Junita Martinez, who with her husband irrigates a family farm using water from the nearby Rio Culebra Basin. ”We have several people on our ditch that have been mayordomos—they teach a child, or maybe a couple of nephews, and they get the hang of how to do it.”

Acequias, a more than 400-year-old Hispanic system in which families share water out of community ditches to maintain the hay, carrots, chico corn, cows and pigs on their farms, are the closest thing to irrigation utopia in this dry land. Operating first in northern New Mexico and later in southern Colorado, acequias began long before Colorado became a state in 1876, and the traditions embedded in their communal lifestyle continue today.

In the San Luis Valley, for example, acequieros get together every spring for an all-day clean-up event, where a dozen or so farmers and their families, sometimes with the help of regional student volunteers, remove dead branches and ”nuisance plants,” as Martinez calls them, before kicking off the summer irrigation season.

”It is a gentle art. It’s passed on from one generation to the next, and you really have to study and pay attention and know your fields,” says Devon Peña, a University of Washington anthropology professor who farms 181 acres near San Luis when he’s not teaching in Seattle. ”The joy of irrigation is a source of peace and connection to others, and to the land and water.”

But that doesn’t mean the acequia system is perfect, especially when droughts ravage streams and crops. In April of an especially dry 2012, a farmer in San Francisco, Colorado, planted alfalfa in a field he’d just purchased. Per acequia rules, he asked the president and secretary for extra irrigation water, and they agreed, allowing him to take his water out of turn. It seemed like a classic example of cooperation along the acequia.

But there was a problem. The acequia leaders forgot to inform a different farmer who’d been scheduled to receive the water at the same time. The neglected farmer pulled rank and diverted the water to his field as scheduled. The conflict escalated to the point that the sheriff showed up and the second farmer pulled a gun. (Nobody was hurt, and the farmer, 72, received 18 months of supervised probation.) The conflict became a lesson for an acequia community that has worked together for generations. “[The alfalfa farmer] was able to save his crops,” Martinez recalls. ”But the community knows we didn’t handle that right. That’s one of the things we learned. We didn’t follow through.”

Due to its scarcity, those who deal regularly with water in Colorado must often work together in an intimate way to sustain their communities. The acequias are a great example of this. Another, similar system can be found in the hundreds of ditch companies around the state, of which 125 are further organized and represented by the 14-year-old Ditch and Reservoir Company Alliance (DARCA).

”What ditch companies traditionally do is collect an assessment and use that to run the company—make improvements, pay people for maintenance and things like that,” says DARCA executive director John McKenzie. For many ditch companies, the incentive to cooperatively come together, as with the acequias, is minimized due to the ability to pay for services, says McKenzie. ”Unless you’re a low-budget ditch company that doesn’t do a lot of assessments. Then there are cases where they would get together and do the cleaning among the members. But that’s getting less and less.”

Ditch company members for the most part divvy up the amount of water they receive based on the shares they own. They are nonprofits, generally, but the shareholder system means, unlike with communal acequias, some members have more influence than others. They must often work hard to overcome self-interests and cooperate. ”We don’t have the tight-knittedness that the acequias have,” says Will Hutchins, a farmer outside Delta, who, as president of the Bona Fide Ditch Company, oversees 32 shareholders.

Bona Fide’s ditch is about seven miles long and started operating in 1887. Today, its members include several farmers, in addition to a bowling alley, a mortuary and a large industrial-park developer. Hutchins is the ditch rider—”chief cook and bottle washer,” he calls himself—which means it’s his job to maintain unity. One ”big family unit” shareholder, as he calls it, spends a lot of time squabbling over land, financing and, occasionally, the weight of silo corn. And Hutchins once had to lock the headgate of another longtime shareholder because she refused to pay her assessment fee on time.

But the ditch company comes together when it has to. Not long ago, a shopping-mall developer requested to submerge 300 yards of the ditch in a tunnel, then build a road on top. Hutchins consulted with the board and shareholders and came up with lofty terms, in which Bona Fide would own the mall and lease it back to the developer for 99 years. (The developer declined.)

“A couple of the board members are actually neighbors. I’m out irrigating my field, I’ll see them on a regular basis,” Hutchins says. “We’re always talking about the crops, the latest political shenanigans some politician’s up to. We exchange loaves of bread and boxes of candy for Christmas.”

In a way, ditch companies operate like families. ”We’ve got various factions that feud with each other,” Hutchins says, but that will also “unite against all outsiders.”

For more than 20 years, officials from the U.S. Fish and Wildlife Service, the Bureau of Reclamation, Denver Water, the Colorado River District, Grand Valley irrigation companies, and dozens of other entities have negotiated on a weekly one-hour conference call to provide flows that will enable endangered fish recovery along the Colorado River. Managing the river’s ”15-Mile Reach,” through Grand Junction, involves a wide range of interests and agendas. The running conversation is how to juggle reservoir releases to meet the needs of endangered fish, irrigators and recreation.

”We all work together, and everybody kind of watches each other,” says Victor Lee, a Reclamation civil engineer who oversees the call. Due to the call’s consistency and the relationships that have formed over time, sometimes the conversation addresses challenges beyond flows for fish.

Recreational groups, including Trout Unlimited and American Whitewater, for example, advise on the timing of releases targeted toward the 15-Mile Reach such that certain conditions identified as part of a Wild and Scenic alternative management plan can be optimized at the same time. That involves considerations like stream temperatures for fish and boatable flows, including for the Gore Fest kayak races held in August. American Whitewater’s Nathan Fey, who participates on the call, calls it a ”good-faith effort to meet non-consumptive needs when conditions allow.”

In another example, this past summer Wolford Mountain Reservoir was slated to release 1,800 acre-feet to the Colorado River but couldn’t due to maintenance operations downstream on Muddy Creek. Williams Fork Reservoir had enough extra water to cover it. So on the phone call one day, Don Meyer of the Colorado River District, which manages Wolford, and Cindy Brady, a water resource engineer for Denver Water, which runs Williams Fork, negotiated the outlines of a trade. Williams Fork would provide the water until the project was completed; then Wolford would release the same amount, later, for Williams Fork.

”It was basically a technical thing, below the radar, and frankly, we kind of like it that way,” Brady says. ”The calls have allowed us to know each other and be able to have those conversations in a productive manner.”

Some 20 or 30 people participate on the call, dealing with issues like an ”April hole” in 2013, when cold temperatures delay runoff flows that would ordinarily satisfy early irrigation needs and reservoirs are at their lowest point, leaving little flexibility to help endangered fish. ”We may have gotten on the phone two or three times that week, because we were all suffering,” says Jana Mohrman, a hydrologist for the Fish and Wildlife Service’s Upper Colorado River Endangered Fish Recovery Program.

”With this group, there are so many moving parts, and so many reservoirs, that this call really works well.”