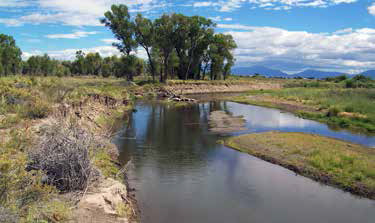 A riparian stabilization project restored the integrity of a formerly eroding streambank, preventing further sedimentation and loss of upland and riparian habitat along the Rio Grande. Photo By: Heather Dutton

In the rural San Luis Valley, farmers congregate in coffee shops or stroll around the Monte Vista Coop, a farm supply store, gossiping about their irrigation ditches.

Rural rumors can be frustrating small-town hearsay, but the reputation of the Rio Grande Headwaters Restoration Project (RGHRP) has travelled the grapevine in a good way, says Heather Dutton, coordinator of the project. “I don’t spend a lot of time going out and rustling up projects,” Dutton says, which wasn’t the case a decade ago. “We have more projects than we can handle because word of our successes has travelled.”

The RGHRP is the result of a 2001 study conducted at the request of local stakeholders—farmers, ranchers, state and federal employees, environmentalists and others—who recognized there were problems with sedimentation as well as the condition of riparian areas, floodplains and irrigation diversions along the Rio Grande and wanted to fix them.

The study examined 91 miles of the Rio Grande, identifying restorative projects such as re-crafting streambanks, planting vegetation and updating irrigation dams. To target those projects over the next 30 to 50 years, a group of people formed the RGHRP. 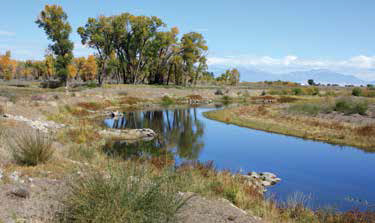 A riparian stabilization project restored the integrity of a formerly eroding streambank. Photo By: Heather Dutton

That community buy-in remains the key to the organization’s success; nearly all of its projects are on private land. By the end of 2013, RGHRP will have completed work on 50 projects covering nine miles of the river. Dutton estimates they are about a sixth of the way toward their goal of implementing the priority projects from the 2001 study. They’ve raised nearly $6 million to pay for the work, including more than $1.6 million appropriated from the Colorado Water Conservation Board’s Water Supply Reserve Account.

These benefits derive from the organization’s work on bank stabilization projects as well as old diversion dams and headgates, many of which have been in use for 80 years or more. “Sometimes the farmer just pushed up enough rocks to force the water into his headgate,” Dutton says. The practice stirred sediment—killing macro-invertebrates and changing fish habitat patterns.

Updated diversions and headgates will eliminate a source of sedimentation and also allow irrigators to more efficiently use and measure water, says Ron Riggenbach, district conservationist with the Natural Resources Conservation Service, who has provided engineering assistance and cost-share for RGHRP projects.

Jamie Hart, president of the McDonald Ditch Company, approached Dutton in search of funding to update his diversion dam and headgate in 2010. “I was in a hurry but they convinced me to wait and do things right,” Hart says.

The McDonald Ditch contains some of the most senior water rights on the Rio Grande, but has only seven irrigators. To justify spending large sums on such a small ditch, RGHRP partnered with the nearby Silva, Atencio and Prairie ditch companies, Rio Grande County and other stakeholders. The small project Hart envisioned ballooned into a $1.3 million endeavor. He is now working with RGHRP not only to fix his headgate and diversion, but also to rebuild a wetland, remove old bridge piers from the river, and protect adjacent properties from flood danger.

“It’s kind of snowballing,” Hart says. “Now there are more and more ditch companies saying, ‘Jamie, how did you start this?’ or ‘How did you do this, I want to do the same thing.’”