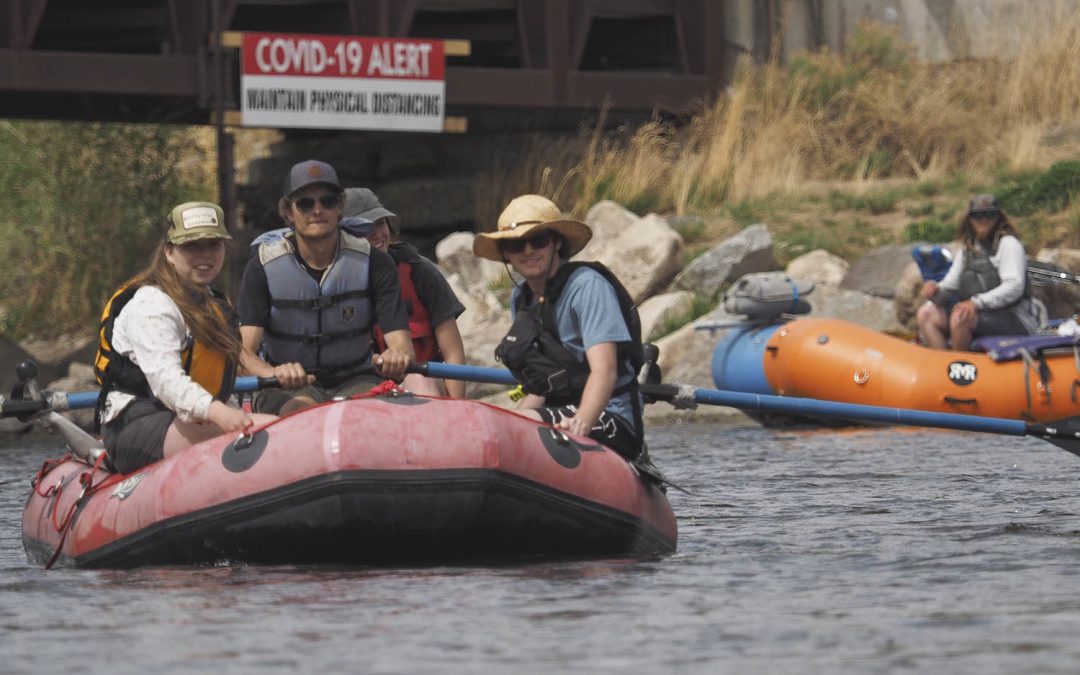 Rafters enjoy a day on the Gunnison River near Gunnison, Colo., on May 17, 2020. The Gunnison is flowing at about 80 percent of its normal volume for this time of year. Overall, Colorado's snowpack is melting faster than usual. Along with lower river flows the presence of COVID-19 is creating challenges for commercial river running companies as well as private boaters. Credit: Dean Krakel/Special to Fresh Water News

With warming temperatures in Colorado’s mountains and spring runoff in full swing, the whitewater boating season should be off to a roaring start.

Colorado’s highest flows, as of mid-May, are in the northern part of the state, with the Poudre and North Platte at 100 to 120 percent of normal, according to Aldis Strautins, a hydrologist for the National Weather Service in Grand Junction.

Because of an unusually warm and dry April, flows are trending downward in the central and southern mountains.

Northern Colorado rivers, such as the Poudre, will have enough snowmelt to extend flows for boating into late summer. Elsewhere in the state the best floating will occur from May into early July. “Get down into that 70 to 75 percent and you’re looking at a reduced season,” Strautins said. “There’s just not enough snow to extend it.” 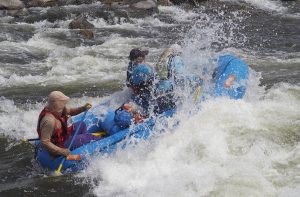 Rafters and surfers enjoy riding a wave on the Gunnison River near Gunnison, Colo., on May 17, 2020.  Credit: Dean Krakel/Special to Fresh Water News

Hoping to maximize the early season flows, outfitters are anxiously waiting to see how many visitors will show, according to Bob Hamel, executive director of the Arkansas River Outfitters Association, a trade group.

“Who’s going to travel? Who’s got money? Will we even be traveling or flying to destinations?” he asked.

Still, Hamel is hopeful that the state’s waterways can be opened for commercial use by early June, bringing some much-needed economic activity to the state.

Colorado’s rafting industry is the No. 2 contributor to the state’s recreation economy, behind skiing. Centered on the Colorado, Rio Grande, Arkansas and Platte rivers, it contributed nearly $188 million to the state’s economy, according to a report of the Colorado River Outfitters Association. Visitors spent an average of $135 on a river adventure, including food, lodging, gas and souvenirs.

These numbers don’t include hundreds of homegrown rafters and kayakers who recreate on Colorado’s rivers or the large numbers of boaters from out of state that bring their own gear to the hallmark waterways.

How COVID-19 will impact the industry this summer isn’t clear yet, though major changes are underway.

“Every river floating company will have to adapt their own safety procedures to the kind of trips that they offer,” said Hamel.  “A half-day trip down the Taylor River can’t be handled the same as a multi-day trip down the Gunnison Gorge. Some rafts are bigger. Some are smaller. The rafting industry can’t do a one size fits all.”

In addition, directional signs will guide visitors to wherever they need to go, with group size monitored by employees. The number of people on a raft will be reduced to maintain proper social distancing, with spaced seating and open windows on vans and shuttles, disinfection of equipment after each use, and instructions to clients to bring their own water bottles and food.

“All of us are juggling things to make it all work. We’re going to being doing it differently, but nobody does it better than Colorado,” Neinas said.