React & Recover: Progress Since the 2013 Flood 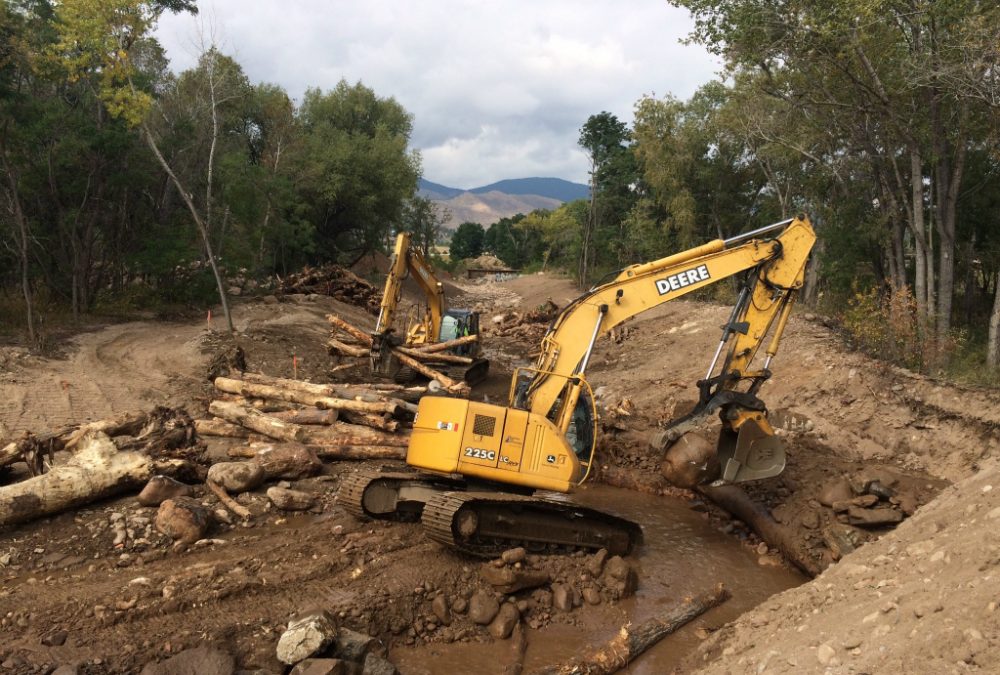 Lumber and machinery were used to stabilize the banks and restore the channel of Left Hand Creek. Photo courtesy of: the Lefthand Watershed Oversight Group

“We have incorporated the natural tendencies of streams, while redesigning the landscape to evolve and adapt for potential future incidents,” – Chris Strum

In September 2013, flooding in Northern Colorado left a wake of homes and entire towns that were destroyed, roads torn up, streams that had changed course, and a pressing need to rebuild. Five years later, river corridors have been restored and communities are transitioning away from the hustle of recovery and looking toward a more resilient future—ready for whatever might come next.

“We are proud to say that as we approach the five-year anniversary of the flooding, 95 percent of the funded stream recovery projects are completed,” said Chris Sturm, the stream restoration coordinator at the Colorado Water Conservation Board (CWCB), in August.

Immediate financial aid came from the Natural Resources Conservation Service’s Emergency Watershed Program (EWP) in 2014 and 2015, totaling $71 million. Funds were administered by the CWCB and went toward the creation of 10 master plans—eight of which were drafted by new watershed coalitions formed in the aftermath of the flood.

Those master plans aimed to protect life and property while restoring ecological function. The result? More resilient watersheds. “We have incorporated the natural tendencies of streams, while redesigning the landscape to evolve and adapt for potential future incidents,” Sturm says.

The Left Hand Creek Watershed was severely damaged during the flooding, with one Jamestown resident killed by debris flow, hundreds of homes damaged or destroyed, and the streambed significantly altered. Residents were eager to get involved with local recovery and restoration efforts. They found that experience with the Lefthand Watershed Oversight Group (LWOG)—a coalition that has existed since 2005, but faced a new set of challenges after the 2013 floods.

Among its recovery projects, LWOG targeted resilience by strategically installing riparian plants along the reconstructed creek and relocating power lines underground. The plantings create fortified buffers to protect the banks and surrounding land from potential floods, while buried power lines are naturally protected from the elements so that residents might not lose electricity during future flood events.

Now, LWOG is monitoring the effectiveness of restoration in order to adjust course if needed. Executive director Jessie Olson is spearheading monitoring efforts through the coalition’s Stewardship through Citizen Science project. Through the project, members are gauging overall watershed health by tracking conditions at various sites. With constant updates and live data, LWOG can adaptively manage the creek, Olson says.

The Saint Vrain Creek Coalition (SVCC) formed in reaction to the 2013 flooding. Created in early 2014 by a combination of local, state and federal funding, the SVCC is focused on developing a collaborative, voluntary process to balance the economic, social, and environmental needs of the Saint Vrain watershed.

Since its inception, the coalition has implemented more than $4.5 million in flood recovery projects in the Saint Vrain watershed to make the river more resilient to future flooding, protect life and property, foster healthy aquatic ecosystems, and encourage recreational safety and access to the river corridor.