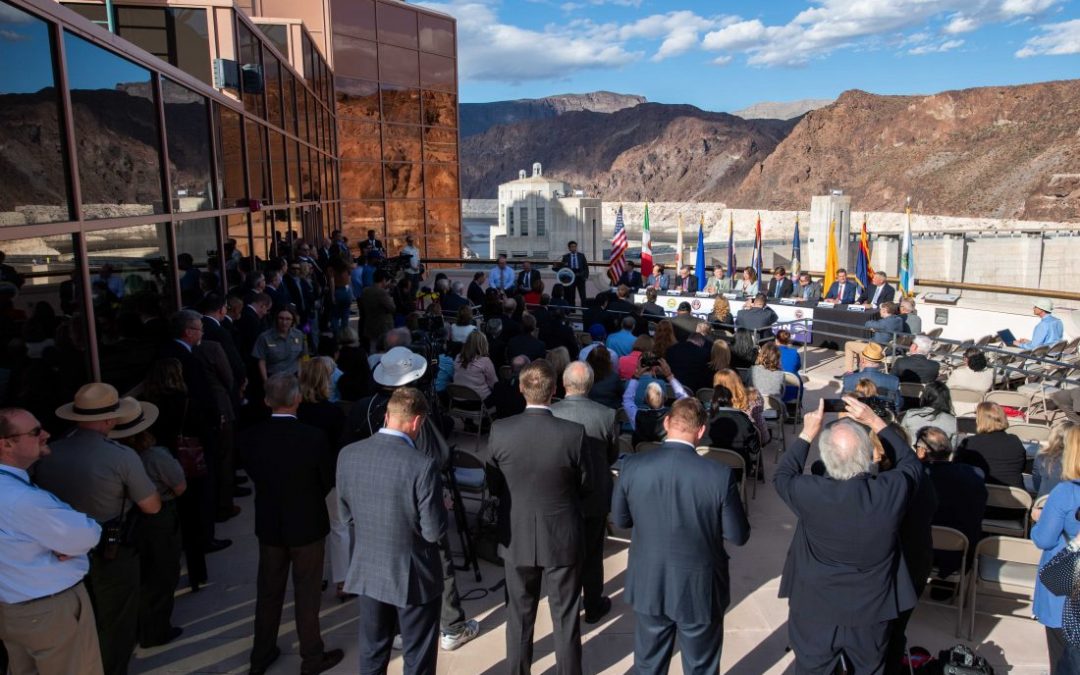 This year, the seven U.S. states that rely upon water from the Colorado River developed yet another agreement about how to share the river’s waters, this time in the face of prolonged drought and climate change.

On April 16, 2019, President Donald Trump signed into law the act authorizing the U.S. Department of the Interior (DOI) to execute and implement the Colorado River Drought Contingency Plan (DCP) through 2026. By that time, DOI and the basin states will likely have developed another new plan for operating the Colorado River.

A lot has changed since the Colorado River Compact first divvied up the river’s waters in 1922. Today, more than 40 million people in two countries rely upon the Colorado River, which originates on the western slope of the Rocky Mountains in northern Colorado, and is fed by major tributaries like the Green, Gunnison and San Juan rivers. Cities from Denver to San Diego, though geographically outside of the natural river basin, divert water from the river for drinking and industry, and farmers irrigate 5.5 million acres of everything from alfalfa to melons.

The Colorado River Basin is also now more than 2 degrees Fahrenheit warmer than the twentieth century average—with “hotter” droughts depleting river flows. By necessity, as the climate continues to change, bringing continued warming and drying, shortage-sharing agreements on the river must continuously be updated to keep changing, too. That’s why the DCP was needed, and why it will sunset in 2026.

But the 2007 interim guidelines, while temporarily keeping the basin out of crisis, did not anticipate the extent of drought that the basin would experience. In 2013, then-Secretary of the Interior Sally Jewell directed states to consider additional measures or face unilateral federal action to avoid a potential crisis. With its own interests to protect, including water deliveries to contractors and tribal water rights, the federal government needed states to put a more robust plan in place.

That led to the latest temporary plan, the DCP, which negotiators say provides some security in avoiding a potential crash of the Colorado River system as water users plan for and use the river’s water even under dry hydrological conditions.

The DCP was also critical to binational cooperation on the Colorado River. In the decades since the United States and Mexico signed the 1944 treaty, the two countries have negotiated “minutes,” which clarify the treaty on issues ranging from deliveries to salinity levels. Most recently, with Minute 323, Mexico agreed to a Binational Water Scarcity Contingency Plan, but one that would only take effect once the U.S. adopted its own drought contingency plan.

“If you consider where we are today with the DCP and Minute 323, and a variety of other things that have happened along the way, the difference between what we have now and what we had in 2007 is very significant” – Anne Castle, senior fellow at the Getches-Wilkinson Center for Natural Resources, Energy, and the Environment

The volume of water being conserved and foregone in the lower basin is significant, she says, and so are the agreements with Mexico.

“Those things result from a realization that it’s an immensely complex river system and the only way we’re going to have sustainability into the future—and power the economies that rely upon that water—is to have cooperative agreements that involve a pretty broad spectrum of water users up and down the river,” Castle says. “Those agreements need to allow steps to be taken that will address this continued decrease in flows we’re seeing.”

Six years in the making, the DCP includes two plans, hammered out separately by the lower and upper basin states. The upper basin plan focuses on flexibility in reservoir operations during drought conditions, investigating how to reduce water demands—including with voluntary water conservation programs—and weather modification to augment precipitation. In the lower basin, the process needed to move more quickly because water use already exceeds allocations. Cities and farms in Arizona, California and Nevada agreed to scale back and take deeper cuts as Lake Mead reaches threshold elevations that trigger those cutbacks. This summer, the first threshold was triggered, so Arizona and Nevada will implement their first-ever cuts in 2020.

Developing plans for each basin was tricky considering that within each state there are also individual tribes, competing interests, and conflicts between urban and rural water users. But, pushed by a deadline from U.S. Bureau of Reclamation Commissioner Brenda Burman, in March 2019, the seven states asked Congress to provide necessary authorizations to execute their final plans. In an era when Congress spends much of its time at an impasse, legislators on both sides of the aisle recognized the need for drought planning. In April, federal legislators passed the Colorado River Drought Contingency Plan Authorization Act and the following month, on May 20, representatives from the seven basin states and DOI signed completed upper and lower basin drought contingency plans.

But the DCP is only a temporary measure to get the basin through the next seven years. Next, water users, states, and water managers will grapple with the reality of a lower basin structural deficit where, even when there’s adequate snowpack and runoff, more water has been allocated than flows through the river.

Not a new problem

As Eric Kuhn and John Fleck write in their new book, “Science Be Dammed: How Ignoring Inconvenient Science Drained the Colorado River,” even during compact negotiations in the 1920s, records showed the river’s annual flows were lower than the total 17.5 million acre-feet allocated to the seven states and Mexico. In fact, three different studies during the 1920s estimated natural river flows at Lee Ferry at between 14.3 million acre-feet and 16.1 million acre-feet.

Planners chose to ignore that information, Fleck says, and with it, they ignored convincing evidence showing the basin regularly experienced long periods of drought. “We have rules written down on paper, allocating water across the basin, that essentially allocate more water than the river actually has—and this manifests itself quite differently in the lower basin than the upper basin,” says Fleck, director of the Water Resources Program at the University of New Mexico. Fleck’s co-author Kuhn is the now-retired general manager of the Colorado River Water Conservation District.

In the lower basin, California, Nevada and Arizona have long overused their allocation, Fleck says, whereas the upper basin states have yet to develop beyond an annual usage of around 4 million acre-feet. But everyone needs to come to terms with the fact that there is less water in the basin, Fleck says. “And that’s what the DCP is,” he says. “The first steps toward a long-term plan for everyone to use less water.”

To use less water, the two basins need their own strategies. In the lower basin, the DCP sets rules to scale back use of lower basin allocations as Lake Mead drops, or until storage conditions improve. Arizona, Nevada and Mexico will see cuts in 2020, while California could follow in future years if reservoir storage declines continue. Over the past few years, water users already started scaling back, says Fleck, but doing so voluntarily: “The DCP gives the structure that gives us the confidence [the cutbacks] will continue,” he says. 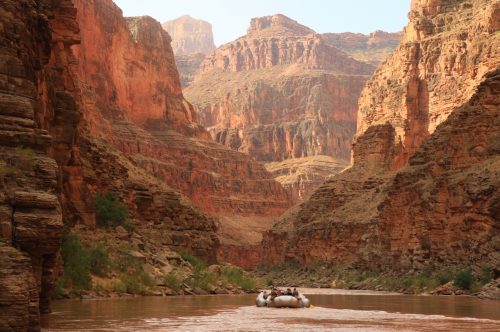 Colorado River flows through the Grand Canyon are determined by releases out of Lake Powell and measured as they pass Lee Ferry, the point on the river that divides the upper and lower basins at the border of Utah and Arizona, often considered the start of the Grand Canyon. Adobe Stock

The upper basin occupies a precarious position of its own, even though it uses less water than it technically could under the compacts that govern its use—use in the upper basin has remained flat, at around 4 million acre-feet per year, since 1990. Because upper basin states must not interfere with a specific quantity of water flowing downstream, they’ll take on much of the burden of dealing with declining flows in a warmer future, Fleck adds. “That means the upper basin has to be sure it has the tools in place to make sure it can continue to meet its compact obligations, to send water out of Lake Powell,” he says. “And it may have to figure out how to conserve water below 4 million acre-feet.” For the upper basin states, avoiding a compact violation equates to more security and control over their share of the river. Whereas, a violation could open the door to unknowns like litigation or even revisions to the compact.

Challenges of a warming world

Any planning on the Colorado River—from the crops farmers plant, to the ways in which cities incentivize conservation among customers, to the DCP’s successor—must address the fact that the basin is facing a hotter, drier future.

Rainfall records, reconstructed from tree ring chronologies that stretch back more than a thousand years, reveal past patterns of southwestern droughts, marked by dry conditions associated with natural climate variability. Today’s droughts in the basin are different. They are notable not just for a lack of precipitation, but also for warmer temperatures, which spur changes in snowpack, increase transpiration in forests and fields, and boost evaporation from reservoirs.

Amplifying and building upon previous national and international reports, the U.S. Global Change Program’s Fourth National Climate Assessment in 2018 painted a troublesome picture of reduced water supplies and future food insecurity in the region. It also identified risks to southwestern tribes from drought and wildfire, and challenges to the region’s infrastructure and energy supplies.

More localized studies of the Colorado River Basin also show that as climate change continues to heat and dry the region, the river’s flows will keep dropping. A 2017 study by Brad Udall, a senior water and climate research scientist at the Colorado Water Institute at Colorado State University and Jonathan Overpeck, dean of the School for Environment and Sustainability at the University of Michigan, showed that flows between 2000 and 2014 averaged 19 percent below the 1906-1999 average, with one-third of those losses due to higher temperatures, versus changes in precipitation. If warming continues, according to that 2017 study, Colorado River flows could decline by 20 to 35 percent by 2050 and 30 to 55 percent by the end of the century.

A study published the following year by Udall and others reiterated that “unprecedented basin-wide warming” was responsible for the declines, this time looking at 1916 through 2014, when the river’s flows dropped by 16.5 percent during that period, even though annual precipitation had increased slightly. The study also revealed the entire basin’s sensitivity to shifts in precipitation patterns—that it matters whether precipitation comes as rain or snow, and also where it falls. Snowfall in the upper basin is more beneficial to the system, for example, than rainfall in southern Arizona. And the future doesn’t look promising: The 2018 study forecasts a future decline in snowfall within four sub-basins in Colorado.

Healthier snowpack this past winter offered everyone a bit of a reprieve, but the Colorado River Basin’s problems aren’t over. At the end of the water year, total system storage was at only 53 percent, according to Reclamation, though that’s up from just under 47 percent in October 2018.

Most of all, he says that any plans concerning the future of the Colorado River, and everyone who relies upon it, must deal with “significant flow reductions in the future.” Planning for 2026, when the 2007 interim guidelines expire, is set to start soon. In the unlikely event that states don’t have something new in place by 2026, operations of the river and its reservoirs revert back to operating criteria developed in 1970.

“This is a really big [water] year, so I think everybody’s happy, but to think somehow the drought is over and climate change isn’t happening—or to hope for the best and ignore the lessons of the last 19 years—I think these high temperatures will remind people, ‘This is not the same old game we used to play in the 20th century.’”