Dialogue on the Dolores 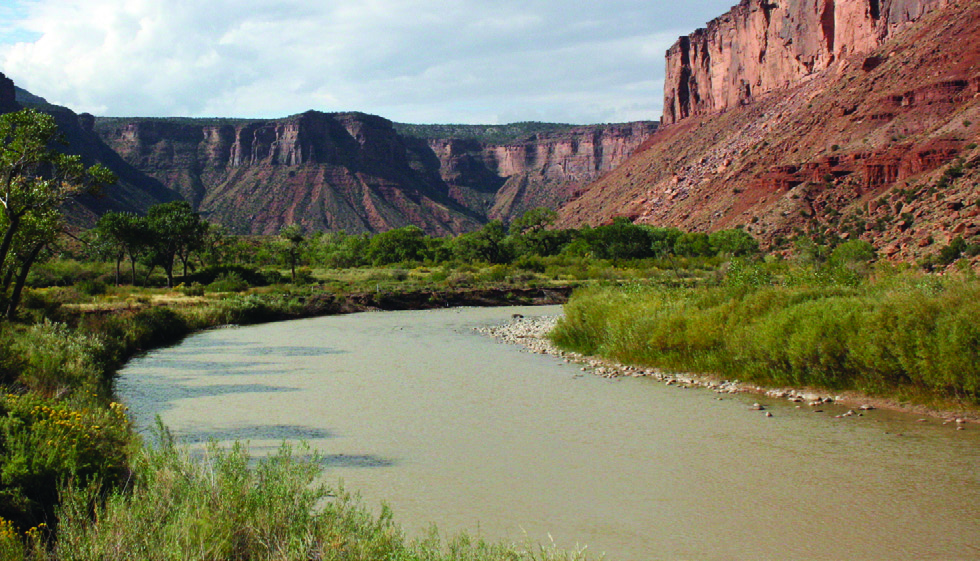 In March 2010, nearly 40 people gathered at the Dolores Water Conservancy District offices in Cortez to help plan the future of the Dolores River.

Such meetings, bringing together every sort of river user in the region, have been regular events since McPhee Reservoir was built on the river nearly three decades ago, creating the second-largest body of water in Colorado. With so many different interests, agreement hasn’t come easy, but this meeting of the Lower Dolores Working Group felt different.

The working group, an offshoot of the collaborative Dolores River Dialogue, was tackling whether portions of the river should be protected under the federal Wild and Scenic Rivers Act. In particular, the U.S. Forest Service and Bureau of Land Management had identified 109 miles of the Dolores and its feeder streams as suitable for Wild and Scenic protection. The designation would formally recognize the Dolores for preserving “outstandingly remarkable scenic, recreational, geologic, fish and wildlife, historic, cultural, or other similar values”—as the law reads—but could also impose certain protective management conditions on practices such as cattle grazing or energy exploration. And although exercise of prior existing water rights for storage and diversion could continue, any future water development requiring a federal permit would be scrutinized for its potential impact on the outstandingly remarkable values.

Faced with a fractious decision, participants surprised themselves. By consensus they set out to propose an alternative to Wild and Scenic protection, working instead toward legislation designating a National Conservation Area, which would bring more flexible conservation measures for the Dolores River landscape without limiting foreseeable water development for farmers and communities.

“It felt like a really big turning point where everyone got on the same page,” recalls Amber Kelley, southern Dolores River organizer for the San Juan Citizens Alliance, a regional nonprofit conservation group. “That meeting was a real watershed moment.”

In the arid southwestern corner of Colorado, where annual average precipitation measures just 13 inches—and often less— the flows of the Dolores are essential to local quality of life. Past cooperative efforts had derailed when confronted with the toughest challenges, namely, how to time and release water from McPhee Reservoir that could meet the demands of irrigators and boaters, towns and tribes, and fish and wildlife. Buoyed by the harmony over the conservation area plan, the Dolores River Dialogue has pushed beyond traditional conflicts and yielded collaborative successes—on paper and in the river.

For as long as there have been Anglo communities in southwestern Colorado, there’s been talk of a dam on the Dolores River. Congress first considered a study for a large reservoir in 1915, but decades passed without further action. The Dolores Water Conservancy District formed in 1961, dedicated to achieving the development. Seven years later, Congress authorized the Dolores Project; by 1986, the project’s 381,000 acre-foot McPhee Reservoir was full.

The Dolores Project not only shored up a 50- to 100-year water supply for residential and small industrial growth in the towns of Cortez, Dove Creek, Towaoc and Rico, but it transformed regional agriculture. The project was able to provide irrigation water to an additional 35,000 acres in Montezuma and Dolores counties, almost doubling what had existed. Thanks to nearly 94,000 acre feet of water stored in McPhee for irrigation, farmers receive water throughout the summers and even during dry years, when the river’s flows naturally drop off to a trickle. Dryland farmers who had raised pinto beans and wheat now use irrigation to extend the growing season and to support the production of high-value dairy hay and an expanding array of fruit, vegetable and row crops.

The scenic lower reach of the Dolores River flows toward
Utah after its confluence with the San Miguel. Photo By: Blake W. Beyea

But along with the agricultural renaissance, McPhee Dam changed flow patterns on the river—to either the enjoyment or chagrin of different local interests.

The Dolores Project legislation originally set aside 25,400 acre feet of water—roughly 10 percent of total accessible storage—in McPhee for fish and wildlife, including flows for a tailwater fishery just downstream of the dam where rainbow trout thrive. The legislation also acknowledged the popular, although highly seasonal, rafting community—which emerges when spring peak flows are high enough to accommodate watercrafts through the Dolores’ desert canyon—requiring that the Bureau of Reclamation and the Dolores Water Conservancy District, which operates the dam under contract to the federal agency, should manage flows to maximize rafting days.

But only in years when the Dolores River produces more water than McPhee can store is surplus water released for boating. Known as a “spill,” such releases of water beyond the reservoir’s capacity have occurred in seven of the past 13 years and are not expected in 2012. During dry years, when releases are limited to the water to benefit the fishery, the rest of the river’s flows are held back in the reservoir for communities and agriculture; during extreme drought years, these releases are insufficient to keep the river flowing at more than a trickle in some reaches.

In those downstream reaches, the health and viability of native fish populations have become an increasing focus of management decisions at McPhee. Three native, warmwater fish species—the roundtail chub, bluehead sucker and flannelmouth sucker— persist in the lower river but are now listed as “species of concern” by the state. The reservoir’s impact on peak flows, habitat and water temperatures has factored into the native fishes’ decline.

When the snowpack is significant, balancing all these different needs while maximizing water stored in McPhee for future years is easy, says Dolores Water Conservancy District General Manager Mike Preston. But in years when the snowpack is modest or scant, the job becomes “challenging” and then “painful,” he adds.

As the Dolores Project was built out, lands that received irrigation allocations were put into production, placing full demand on McPhee Reservoir. Meanwhile, since all Dolores Project water except the fish pool and boating releases is diverted into the neighboring McElmo Creek Basin, the Dolores suffered for a lack of return flows—water that, had it been used within the basin, would have percolated through the ground and back to the river.

Managers, who initially established tiered dam release levels for dry, normal or wet years, with flows set at a low, medium or high rate depending on the conditions, hit their first “dry” year in 1990. According to protocol, releases fell to the low setting of 20 cubic feet per second—and the river system crashed.

By 1996, managers reconfigured how they managed the water set aside for the environment, developing a “fish pool” from which water would be released based on the recommendations of biologists. Rather than relying on pre-determined releases, the fish pool has introduced more flexibility for managers, says Graf, but the optimal amount of water for the pool—36,500 acre feet annually—isn’t fully available most years.

As drought set in across Colorado in 2002 and 2003, progress on the Dolores was at a standstill. River users realized that without meaningful actions to help the declining populations of native fish, they would likely end up on the federal Endangered Species List, which could mandate an increase in downstream releases at a cost to other water users.

In January 2004, the Dolores River Dialogue held its first meeting. The group formed to explore management options for McPhee. Following a previous collaborative effort that failed, members agreed to act by consensus and make decisions based on scientific research and historical data.

There has been no shortage of topics to confront. The revision of a federal management plan for the Dolores River corridor and expanse of surrounding public lands compelled Dialogue members to consider the consequences of Wild and Scenic River designation, leading to the creation of the Lower Dolores Working Group in late 2008.

The March 2010 “watershed moment” demonstrated that river users are ready to compromise and cooperate. The consensus spawned a legislative committee, chaired by Kelley of the San Juan Citizens Alliance, which crafted recommendations for the Dolores River National Conservation Area to protect the outstandingly remarkable values recognized by the Wild and Scenic Rivers Act. The committee, which included local county commissioners, reached consensus on nearly all management aspects, but ran into an old obstacle when it came time to figure out flow management for native fish in conjunction with other river uses.

The lingering predicament could have derailed the process, but in late 2010, using $85,000 raised by local partners including the Southwest Basin Roundtable, the Dialogue launched “A Way Forward,” an initiative that commissioned three fish biologists to review existing science and assess the native fish populations. In August 2011, the researchers reported a lack of sizable populations for any of the native fish throughout the lower Dolores and then outlined nine opportunities for improving conditions without jeopardizing existing water rights. They also laid the groundwork for improved monitoring and evaluation.

An implementation team, including many Dialogue members, is completing a plan to put the first measures in place this summer. Scientists will implant transponders, known as PIT tags, in some fish and use real-time temperature and flow data to monitor their use of the river and the impacts of different reservoir spill practices. A push to eradicate non-native smallmouth bass and brown trout in the lower river, which compete with and feed on the native fish, should follow. The Colorado Water Conservation Board has supported the implementation team’s work with $50,000.

In wet years, managers will also begin experimenting with releasing additional flows earlier to keep the river below spawning temperatures until rafting spills are over. In the past, large, cold pulses of water early in the summer have destroyed new generations of young fish. Managing reservoir releases to more closely resemble natural flow patterns and flood events should also provide some big boating days, says Nathan Fey, Colorado stewardship director of American Whitewater. His group, a national nonprofit dedicated to river conservation, has also added to the pool of knowledge with a recreational flow study that is being finalized this summer.

“There are really good scientific data and strategic approaches to managing spills for the benefit of the native fish,” says Shauna Jensen, a BLM hydrologist and working group member. “But, more than that, one of the greatest benefits of the process is the collaborative nature and diversity of the group. All of these people have come to the table with an open mind, willing to work out these things that for years no one’s addressed.”

Backed by science, the new flow regime is reaching a promising confluence of interests. “There’s enough water in the Dolores River to meet all of these needs,” says Don Magnuson, general manager of the Montezuma Valley Irrigation Company, “if we work together.” For its part, the ditch company stretches its water to meet demands through efficiency measures. It recently installed 11 miles of gravity-pressurized pipelines, and Magnuson says there are opportunities for improvements on many more stretches as funds become available.

The working group’s legislative committee will share its suggestions for the conservation area this summer, setting the stage to test an adaptive management strategy that allows flexibility between priorities on the river. Over the long term, partners will continue to explore ways to increase the fish pool and base river flows below the dam. They are also preparing to monitor social response to reservoir operations and how managed releases for whitewater boating are forecasted and announced to the general public. And though this year’s dry spring means another no-spill year for McPhee, Preston points to the critical need to figure out how to manage and monitor during such years, since they occur an average of 45 percent of the time. “While 2012 won’t be nearly as much fun for the implementation team, or for boaters, it is an important learning opportunity,” he says.

Challenges on the Dolores won’t be resolved overnight, but after episodes of inaction and stalemate, Dialogue participants are basking in an era of cooperation.