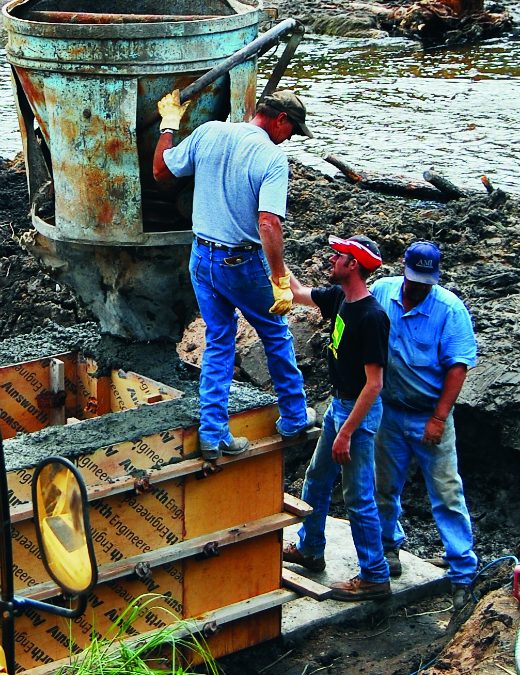 Welcome to Happy Meadows, a flat, 4-mile stretch of river that straddles public land and the private Sportsman’s Par­adise fishing club just northwest of the town of Lake George. This is the site of an ambitious river reha­bilitation project that has seen private landowners join with the Forest Service, watershed protection groups and the state’s largest utility to restore this pretty but ailing waterway.

It all started back in the 1960s, when the Sport­man’s Paradise homeowners association (HOA) con­structed a slapdash dam to divert water to an irriga­tion pond and to keep fish within the club’s section of river. Over time, the dam had the opposite effect, cre­ating broad but shallow channels that reduced pocket water, nooks where fish love to hide out.

“The dam was a major problem for water qual­ity and fish passage,” says Carol Ekarius, executive director of the Coalition for the Upper South Platte (CUSP), the watershed group that spearheaded res­toration efforts.

What’s more, man-made diversions downstream dampened the river’s ability to perform one of its essential functions—flushing sediments that move down from naturally-eroding hillsides. When the Hay­man Fire—the largest wildfire in Colorado history— swept through the area in 2002, it sped erosion and compounded the amount of sediment flowing into the river. It was the perfect storm: Trout habitat con­tinued to decrease, and the river became wider and more clogged.

“All the parties need to come to the table so we can start designing projects that satisfy multiple goals. This isn’t a Band-Aid approach.” – Carol Ekarius

The Forest Service was the first to requisition CUSP’s help, asking for a plan to restore habitat in Happy Meadows. After years of negotiation, Ekarius convinced the Sportsman’s Paradise HOA that removing the dam and creating a better-functioning diversion would result in improved trout habitat and more fish.

During the summer of 2011, CUSP, the HOA and private habitat consultants worked tirelessly to do just that. They also excavated unnatural islands; blocked off select channels to narrow the river; and reinforced riverbanks with replanted willows, ponderosa and sedge. Denver Water also got involved, managing the South Platte’s flow during construction—a complex undertaking during a season when water is in high demand. Phase one of the project was completed in September 2011.

In the end, the project will be a decade-long undertaking. Yet the many stakeholders are already pleased with the visible improvements. Fish have started to return to Happy Meadows, and biomass and diversity is on the rise.

“It’s really an ‘If you build it, they will come’ situation,” Ekarius says. Importantly, the project also heralds a new era of more complex river rehabilitations that no one party could accomplish on its own. “All the parties need to come to the table so we can start designing projects that satisfy multiple goals,” says Ekarius. “This isn’t a Band-Aid approach.”