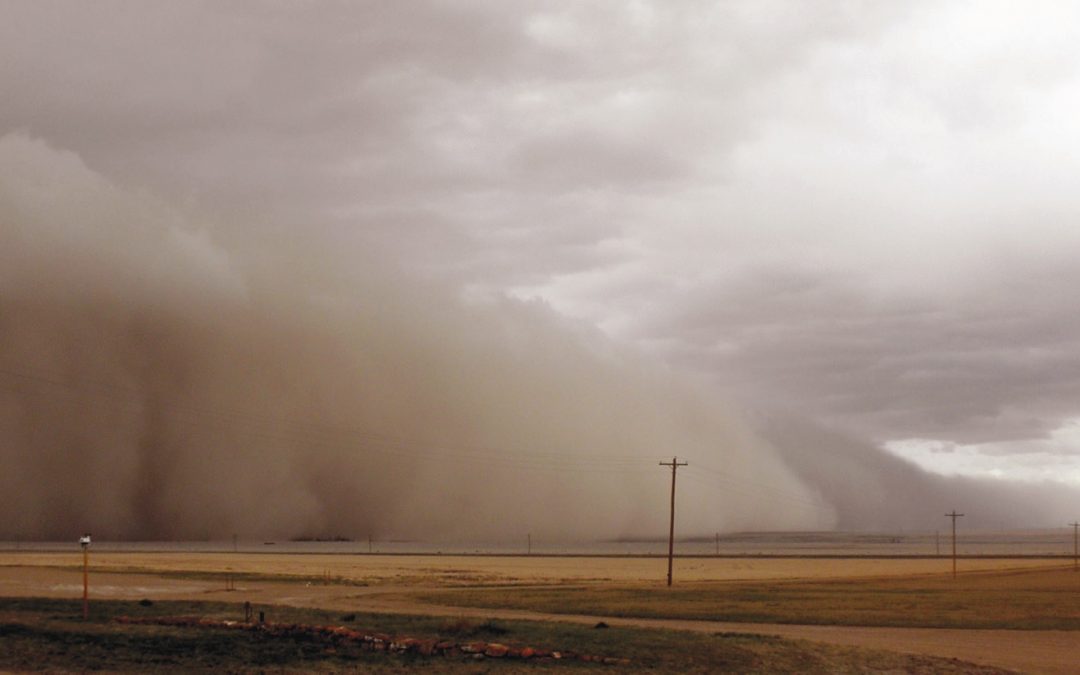 “There are opportunities for rain and snow, but with weather patterns that only infrequently deliver this moisture, anything that disrupts those occurrences will introduce drought challenges.” – Nolan Doesken

Colorado is a land of extremes. Severe droughts segue into 1,000-year rains and 100-year floods. It’s all about moisture, says State Climatologist Nolan Doesken—where it comes from, and whether it turns into precipitation.

“Because we are far removed from our moisture sources, which are primarily the Pacific Ocean and Gulf of Mexico, most of the time we are dry,” says Doesken. “There are opportunities for rain and snow, but with weather patterns that only infrequently deliver this moisture, anything that disrupts those occurrences will introduce drought challenges.”

In western Colorado, the “wet” season occurs each winter, when the jet stream flowing eastward across the continent is strongest, carrying moisture from the Pacific and lifting it up the western face of the Rocky Mountains. For the eastern part of the state, the wet season begins each spring when the jet stream dies down, allowing wet air masses from the Gulf of Mexico that otherwise move eastward to be drawn north into the center of the country.

As Doesken points out, these seasons are only truly “wet” if that moisture is deposited in Colorado via rain or snowstorms. “In any given year, it comes down to the opportunity for roughly six major storms,” he says. “If you get them, you have a wet year. If you get half of them, you are in a middle condition. If they skip over us, you are in a drought.”

During 11 of the past 15 years, moderate to extreme drought has plagued at least one region of the state, and in six of those years Coloradans have experienced extreme or exceptional drought. The impact of water shortage on the economy underscores the resource’s importance: The 2002 drought cost various statewide industries $2.8 billion, while the 2012 to 2013 drought cost the agricultural sector alone $726 million. 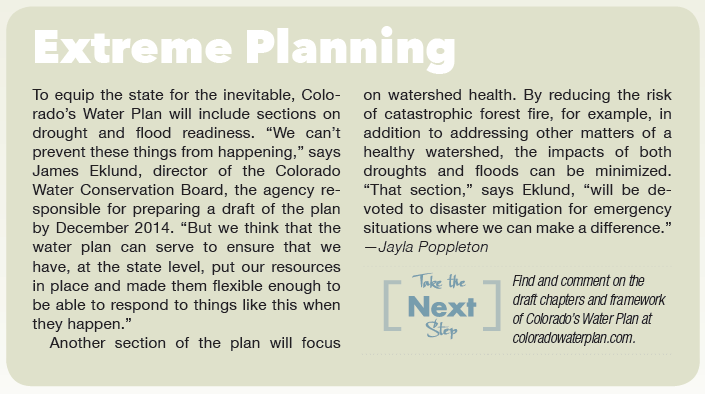 Because of Colorado’s unique climate and topography, the storms we do get can also lead to the other extreme: flooding. “To get rain-induced flooding, you need a weather pattern that brings in a lot of water, and then you need to lift it,” says Jeff Lukas, senior research associate with Western Water Assessment at the University of Colorado, Boulder. One way this happens is through frontal lifting, when two air masses collide forcing warmer air up and over cooler air. Another way is through convective lifting, where low-level air warms up and rises, resulting in severe thunderstorms.

“In a state like Colorado, there’s so much variation we likely experience a 100-year flood somewhere every year, although most are not in populated areas.”       – Kevin Houck

Then there’s terrain lifting. “If you have a 4-, 5-, or 6,000-foot elevation difference, you can have really effective lift and cooling, and the ability to bring precipitation out of moist flow,” says Lukas. This dynamic, in combination with frontal lifting, bore out during September 2013’s historic flooding on Colorado’s Eastern Slope.

The Western Slope of the Colorado Rockies can also produce terrain-induced lifting, but the resulting precipitation is usually less extreme for any given event, says Lukas. This is partly because the change in elevation isn’t as abrupt as along the Front Range, but also because there’s a clearer path for that Gulf of Mexico moisture-laden air to reach Colorado without interruption from other mountain ranges.

While the September 2013 flooding was extreme, it wasn’t unprecedented. In fact, says Kevin Houck, chief of watershed and flood protection for the Colorado Water Conservation Board, “In a state like Colorado, there’s so much variation we likely experience a 100-year flood somewhere every year, although most are not in populated areas.”

On average over the past 100 years, flooding has cost Colorado roughly $85 million a year, with some years contributing more than others to that figure: The September 2013 flood, for instance, caused roughly $3.4 billion in damages. And floods in 1921 and 1965 on the Arkansas River and South Platte respectively, caused $1.1 billion and $2.9 billion in damages in today’s dollars.