When Boating Gets Swamped 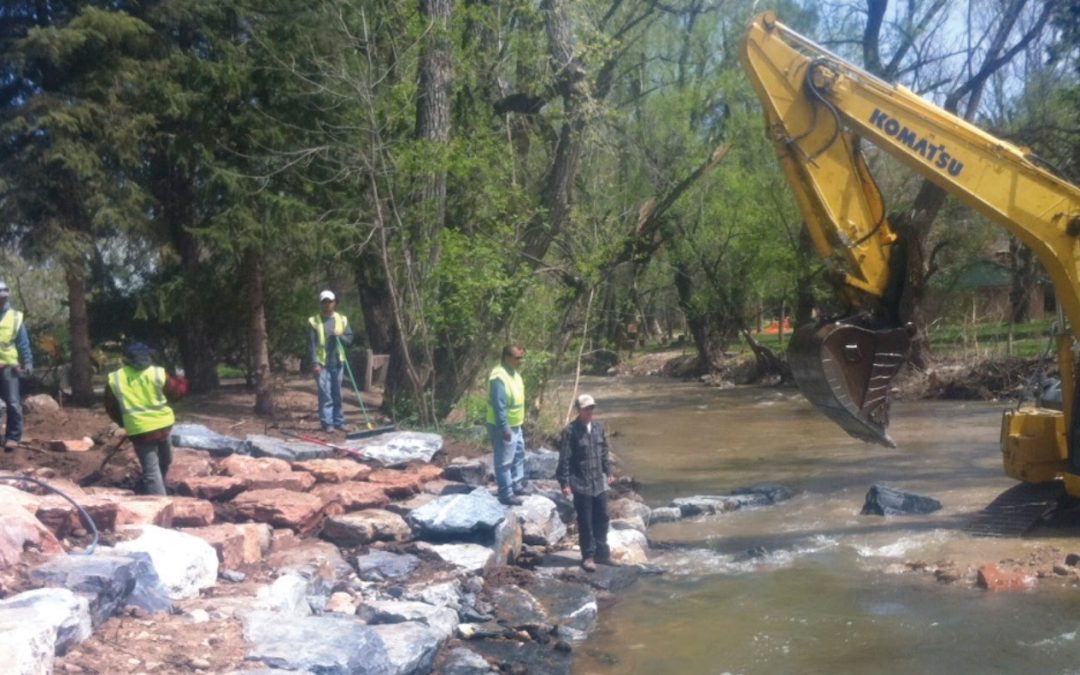 What do you do when the creek in front of your house becomes a monster river, pumping more than 40 times the amount of water that usually flows through its narrow channel?

If you’re Scott Shipley of Lyons, Colorado, you rescue your wife and two young kids from the island created by the floodwaters. Then you start the long process to rebuild your town.

Shipley, a whitewater park engineer, is a three-time world champion and Olympic kayaker; his wife is also an accomplished boater. The usually mellow St. Vrain Creek that courses behind their back yard is home to three of the best kayak playparks in the country. Those are now thickly bur­ied under sand and cobble from the September 2013 flood.

Gary Lacy of Recreation Engineering and Planning Inc. is the Boulder-based engineer who designed Lyons’ playpark—a process of engineering rapid runs to create surfable waves—and is now consulting for the town to restore damaged whitewater features. He says Lyons’ struc­tures are intact but not functioning due to “enormous amounts” of deposition. Shipley, however, disagrees. He thinks only one feature remains, the October Hole, and that it, too, will need to be repaired. In either case, significant dredging will be required to restore a functioning playpark.

Just to the south, Boulder Creek’s whitewater park near Eben G. Fine Park was also affected by the flooding, but not nearly to the same extent. Some drops were obliterated, other structures were modified—“in a good way,” says Lacy, a 30-year veteran of whitewater design responsible for 86 playparks nationwide, including Boulder’s—and the channel was packed with sediment. While both communities were anxious to see their creeks restored, Boulder had the ability to foot the bill and thus move more quickly while waiting for Federal Emergency Management Agency (FEMA) funds that may or may not come through.

It also helped that dredging and repairs to drop structures on Boulder Creek, among other proj­ects, were needed to serve multiple purposes, such as imminent flood control protection. Work on the Boulder Creek channel began in April 2014, and the playpark was restored to its pre-flood condition in early May. “Boulder Creek will look pretty darn good this summer,” Lacy says. “It’s going to be a great place to come boat.”

Meanwhile, for the much smaller Lyons community, where whitewater is a key driver of the economy, work to bring its kayaking structures back online is still just a glimmer in Shipley’s eye. The town estimates flood damage at $50 million—an astronomical figure for a town with a budget of less than $1 million a year. Other infrastructure and public safety projects have taken priority.

“The sunny side of this whole thing is that we can re-envision our town and parks.” – Scott Shipley

Shipley’s company, S2O Design, worked with FEMA and the U.S. Army Corps of Engineers to move the St. Vrain back to its pre-flood channel and to make sure the town wouldn’t get “shel­lacked,” as Shipley put it, by the spring runoff. But the town won’t tackle rebuilding its whitewater park until 2015.

FEMA grants for channel repairs are limited to projects not specific to the playpark, such as streambank stabilization. The rest of the town’s flood recovery funds will come from city and state grants and private donations. Funding to rehab the whitewater park is still up in the air.

The Lyons Outdoor Games, which draws world-class kayakers—along with spectators and their dollars—to Lyons, was still held as planned in late May 2014. The schedule was limited and the October Hole was the only structure stable enough for boating, but it was light at the end of a long winter tunnel for businesses that had suffered without tourism income since the previous summer.

“For the play [boating] community, it’s very disappointing that Lyons’ rapids won’t be back this summer [2014],” says David Holzman, a local boater who will instead head to Golden’s playpark, where September 2013 flood flows amounted to nothing more than a good spring runoff. Still, he looks on the bright side: “I’ve been boating Boulder Creek and the St. Vrain for 15 years. I could close my eyes and run them, I know them so well. Now they’re like new rivers, with new challenges and new things to learn.”

Shipley, too, concedes a plus to the flooding. “The sunny side of this whole thing is that we can re-envision our town and parks.”