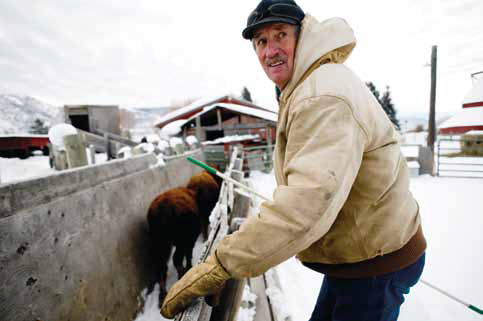 Jay Fetcher looks back at the remaining cows he has set aside to be loaded and trucked to the front range to be sold. Photo by Kasia Broussalian

Ranchers have muscled their way across the lands of the Yampa River Basin for more than 125 years, welcoming the river’s huge flows to their hay meadows in the summer, using sleds to feed that hay to their cattle when winter snows cover the valley.

Matt Belton, 40, and his wife Christy, 37, are no exception. Matt is a fifth generation Yampa Valley rancher. On a bright Saturday morning in November, he is impatient to get to work. His equipment—four gleaming, black, Percheron work horses—is nearly ready as well.

At 7:30 a.m. the horses are waiting to be harnessed to a giant hay sled. Throughout the winter, on sub-zero mornings, Belton can be found in a gracious, old, red barn that nearly touches Elk River Road northwest of Steamboat Springs, loading the sled with more than 70 hay bales. It will take several hours to feed the 150 mother cows that comprise Matt and Christy’s permanent herd. “What I love about ranching is that it’s very rewarding work, although it’s also very hard,” Belton says.

Yampa Valley ranchers, like those everywhere, are addicted to the outdoor life—the light, the howling winds, the silence, the scent of grass. So blessed is the quiet that Belton insists on using the Percherons instead of tractors for the heavy, relentless work of feeding livestock in deep snows. “It’s more peaceful,” he says. “The horses start every day. They don’t have broken hydraulic hoses or flat tires.”

Anyone who has driven from Steamboat north to Steamboat Lake has passed the headquarters for the Beltons’ hay and cattle operation. They don’t own it. Few young ranchers these days can afford the millions needed to buy land in this scenic high country just minutes from Steamboat ski resort.

But this is an exciting time for the Beltons. They’ve just purchased 50 acres of land. It’s not enough to support a cattle herd, but it comes with federal grazing permits for more than 20,000 acres of Bureau of Land Management terrain. That’s enough land to double the number of cattle they can feed during the summer for sale in the fall.

This year, Matt and Christy will grow their 1,000-head summer herd to 2,000 head. For Belton, there is no time to waste. He’s hired two young men, at $20 an hour, to help him lay down fences in the mountains where the new grazing permits are located. The fences are flattened during the winter to allow wildlife to roam safely. In the spring, they will raise the fences to contain the cattle. Mile after mile of fencing will be scrutinized to make sure it is sound and ready for the season. “There are no Sundays west of Omaha,” Belton says lightly, repeating the mantra of western ranchers. 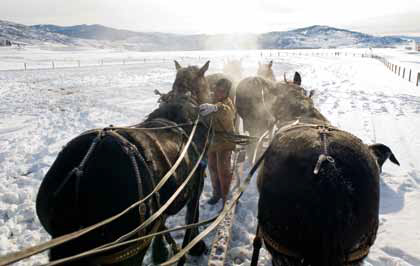 Chaz, Nugget, Kibbles, and Bits pull the hay-loaded sleigh through a foot-and-a-half of snow as Matt Belton holds onto the reigns. Belton owns six horses for feeding, two of which are not yet broke. Photo by Kasia Broussalian

Winter is normally a slow time on ranches. But here in the Yampa a critical water planning process is coming to a head, one which area ranchers are watching closely because it could forever alter the way they live and work.

Northwestern Colorado has always been a wild, unreachable place, a fact that has long protected the Yampa River’s flows from the growth and development pressures that have tapped every other river in the state. The Yampa is one of the last rivers in Colorado, and one of the few in the American West, that has water left to develop.

The Yampa generates roughly 1.6 million acre feet of water each year, according to annual flow records compiled by Colorado’s Division of Water Resources. That’s enough for more than 3 million households in a region where barely 36,000 people live. Contrast that with the Front Range’s South Platte, a river that generates about 1.4 million acre feet, but which supports a population of more than 3 million.

Of course, the South Platte is assisted by nearly 400,000 acre feet of water imported through transbasin diversions. As growth continues, urban users on the Front Range are already discussing a new pipeline that could, if it were ever funded and permitted, bring several hundred thousand more acre feet of water east. The water would come from the Yampa.

Moffat County Commissioner Tom Gray, who ranches outside Craig, is chairing the Yampa/White/Green Basin Roundtable, a state-funded, regional body charged with determining how much water these rivers provide, how much the adjoining region needs for its small towns, ranches, coal mines and gas wells, how much could be shared with people outside the basin, and how much should be left in the stream for fish and river runners. The work is deeply contentious. Gray says when he took over as chair of the roundtable in October 2009, friends offered him condolences.

Ranching advocates want to ensure the heavy flows they use to irrigate their hay meadows will remain in place, protecting the agricultural economy here, and by default, riparian lands, fish and wildlife.

“There’s no question we’re at a crossroads,” Gray says. “In the lower end of the valley, there is recognition that if we don’t allow the excess water to be developed, if we say ‘no way, no how,’ companies like Shell could come in and just start buying up agricultural water rights, and no one wants to see that happen.”

Shell already filed for a significant water right on the Yampa in December 2008, proposing to transfer the water into the White River Basin for oil shale development, but it has yet to be granted.

According to Gray, Moffat and Routt counties comprise roughly 3 million acres. Most of this is publicly owned land which the federal government allows to be used for grazing. About 1.1 million acres are privately held, with the vast majority also devoted to agriculture.

Gray and others would like to see agriculture expand even further in the Yampa Valley, but first they would need additional storage reservoirs for irrigation. “If we had the mechanism to deliver agricultural water at a reasonable rate, we have a lot of acres that could be irrigated,” Gray says. The subject is currently being examined by the roundtable through its Agricultural Water Needs study.

Not only is the roundtable looking at water needs associated with agricultural expansion, but it’s also addressing current water shortages resulting from the lack of irrigation storage. By late summer, many farmers who rely on direct river diversions to continue irrigating their meadows are coming up short.

Climate change is another variable the study is factoring in. Concerns about climate change have begun to surface in the Yampa, where warm, early springs are causing the runoff to start and finish earlier. Rising temperatures will likely reduce runoff in addition to lengthening the growing season and increasing the amount of water plants need to survive in northwestern Colorado, putting additional pressure on agricultural water supplies. The current Colorado River Water Availability Study by the Colorado Water Conservation Board is looking at these types of issues statewide.

Adding irrigated acres in a semi-arid region—where other river basins are watching such acreage melt away as water is sold to urban areas—is a radical concept. But Gray and some ranchers believe it represents a reasonable use of the water not only because agriculture is vital to this isolated, rural economy, but because putting water on hay meadows ultimately means some of it will travel back to the Yampa’s mainstem and tributaries as return flows. By some measures, 60 percent of water applied to the meadows in this region returns to the stream.

Jay Fetcher, who ranches up the road from the Beltons, is less sure than Tom Gray that adding irrigated acres in a water-short state can be justified. From his living room windows he watches over a 20-acre hay meadow, irrigated with water rights on the Elk River that date back to the 1880s. “We use flood irrigation,” Fetcher says. “It’s very inefficient in terms of how much water we need to deliver to each plant, but it’s very cheap. There are no pumping costs.”

Like the Beltons, Fetcher uses his hay to feed his cattle. If Yampa Valley ranchers had to buy feed, the costs of raising cows would be prohibitively high. Fetcher’s hay and cattle operation spans about 2,000 acres. The hay from that 20-acre meadow—if it were sold publicly—would generate about $6,000 in annual income.

“But the same water used to produce the hay would support about 6,000 people on the Front Range. Or it could be used to grow more valuable crops than hay,” Fetcher says. “How do I justify that when there is such a strong demand for water on the other side of the divide? My peers have said ‘I can’t justify it,’ and they have sold their water rights.”

So Fetcher and other ranchers continue their debate, hoping an equitable solution can be found for stewarding the basin’s water for agriculture and other uses.

Those outside the Yampa Basin are also keeping close watch on its celebrated, storybook ranches. Thousands of acres have been preserved here using conservation easements. Easements are legal agreements under which private property owners agree to forego their right to develop their lands in exchange for tax credits. Ranches can remain in operation and in private hands, but will be permanently protected from development.

One such easement is the Carpenter Ranch, a nearly 1,000-acre spread purchased by The Nature Conservancy in 1996. The ranch runs along the Yampa River on Highway 40 between Steamboat and Hayden. The river floods the ranch’s hay meadows each year, at the same time sustaining a rare riparian forest. Geoff Blakeslee, Yampa River project director for The Nature Conservancy, has managed the ranch since 1996, though he no longer runs the day-to-day ranching operation. That part is now attended to by a local ranching family, who continue to produce hay and raise cattle.

Blakeslee also sits on the roundtable and the Colorado Water Conservation Board’s board of directors. He believes it’s vital that the basin look ahead to ensure its roaring streams remain healthy even as they are asked to do more for the region and the state.

He is hopeful that new concepts will emerge, such as reworking old flood irrigation systems to make them more efficient, something he has undertaken at Carpenter Ranch. He also thinks ranchers in the Yampa may be able to utilize interruptible supply agreements with cities—giving urban areas some water in dry years for ongoing cash payments—although hay meadows can’t go without water for a full season without sustaining significant damage.

Colorado Agriculture Commissioner John Stulp says the loss of agricultural water on the east side of the Continental Divide through the sale of private water rights should provide a cautionary tale to the Yampa Basin.

“Part of the heritage of the Yampa and the ranchers’ 401Ks lie in those water rights,” Stulp says. “But if they’re all purchased, it will diminish the overall agricultural economy over time. The lesson we learned on the Front Range is that we give up a lot of the economy when we give up irrigated acreages.”

Matt Belton, who sits on the board of the Routt County Cattlemen’s Association, says he and his wife, who is a real estate broker, are looking forward to years of ranching. “But I am worried about the water,” Belton says. “If we can’t protect our ag water, then we can’t do this.” ?