Playing on a Monster 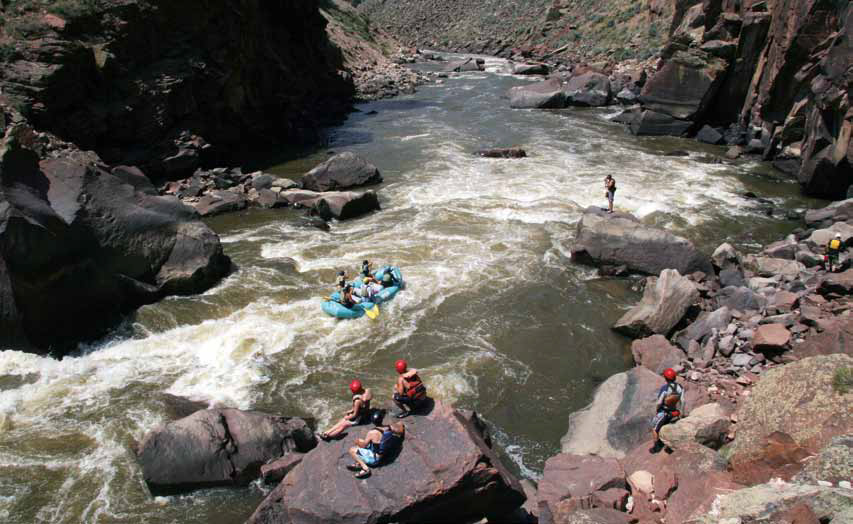 Rafters paddle through the Class IV "Osterizer" rapid at the entrace to the 5-mile-long Cross Mountain Canyon on the Yampa River. At 5,000 cfs, the rapid evolves into a river-wide monster hole called "Mammoth Falls."

The Yampa River may be the last most accessible place to squeeze in whitewater thrills before dinner on a weeknight. It’s also one of the few places an angler can catch an 18-inch rainbow trout over the lunch hour and still be back in the office by 1:30 p.m. The prospect might make you want to live in Steamboat Springs, Colo.

More than 100 miles downstream, the Yampa also offers one of America’s best multi-day raft trips as it flows through Dinosaur National Monument. All along the river are camping, paddling and fishing opportunities galore. The broad combination of recreational amenities the river provides has created a veritable tourist-based economy in the upper Yampa Basin—a region previously more reliant upon mining and agriculture.

In 2007, according to the Colorado Department of Local Affairs, 23 percent of income and 34 percent of employment in Routt County was tourism-related. And the Yampa welcomes more visitors every year.

Pouring off the uplifted volcanic flows of the Flat Tops Range, the sibling Yampa and White rivers have seen noteworthy increases in recreational activity during the first decade of the 21st century. Hikers and anglers returning to “secret” wilderness lakes in Flat Tops, at the head of the White River, say they are beginning to see other people where previously there were few signs of human activity.

And in downtown Steamboat Springs, it’s necessary to hold river cleanup days twice a summer where volunteers collect bags of sandals lost by carefree tubers. They come by the hundreds each mid-summer day to bob through the manmade kayak play holes that parallel the pubs and restaurants dotting Yampa Street. On those days, the river resembles a theme park with no admission fee.

Choose your own adventure
In terms of sheer size, Yampa River State Park is the dominant recreational facility on the river. The park stretches over 134 river miles with 13 public access points scattered from just upstream of Hayden to just upstream from the intense whitewater experience of Cross Mountain Canyon.

In terms of international fame, the tightly regulated multi-day float through Yampa Canyon in Dinosaur National Monument gets all the accolades. Only a handful of people get to enjoy the canyon’s special attributes on their own terms. The National Park Service reports that in 2009 it received 4,608 applications for the lottery that allocates float permits through Yampa Canyon. Of those several thousand, 298 parties were awarded launches. And of those, just 198 were put to use.

For those who can afford it, a commercial trip is the only sure way to get to enjoy this sublime stretch of wilderness river. A reasonable substitute is to drive down the long, bumpy road from the monument’s visitor center to Echo Park on the Green River, several hundred yards below the confluence with the Yampa. It’s not unheard of to sit in the campground in the early evening and watch a small band of desert bighorn ewes and lambs walk casually between the picnic tables on their way to water.

The solitude of such a moment is harder to conjure on a summer day in Steamboat, where a short reach of the Yampa receives most of the pressure from human recreation.

“This little 6-mile stretch might see more recreation than all the others combined,” says Kent Vertrees, manager of a local whitewater rafting company. “It’s because of the resort. It’s the most attractive infrastructure that we have—it’s also a natural environment. Who takes care of it? We have to.”

It’s in Steamboat that kayakers from around the region come in late May and early June, when the river crests above 3,500 cubic feet per second, to practice their stunts in standing waves created for their amusement as part of a special water decree obtained by the city in 2003. The recreational in-channel diversion water right, or RICD, could someday help the city ensure adequate summer flows for boating. Although the required flow meter was installed at the Thirteenth Street Bridge by the summer of 2008, the RICD has yet to be invoked. Both 2008 and 2009 were good years on the river, so there was no need to curtail junior users.

In this town stretch, kayak features spin off eddies where trout hold in the seams between currents, attracting anglers intent on presenting a hand-tied fly with just the right drift to entice a strike from a memorable fish. Into these same trout lies come hundreds of tubers, laughing, splashing and shouting to one another, innocently and unknowingly inhibiting the successful catching of fish.

Some find this frustrating, but Peter Van De Carr, a retailer of kayak and rafting equipment and one of the larger commercial tubing outfitters in Steamboat, feels strongly that the river is for everyone to use. He organizes semi-annual river cleanup events and has pushed the “Respect the Yampa Campaign.”

“Everyone needs to get out and enjoy the river. That’s what’s going to save rivers,” -Peter Van De Carr

Rafting and fishing the hydrograph
Van De Carr is probably one of a handful of people who have paddled the entire length of the Yampa River. He has traveled by kayak from the Town of Yampa in South Routt County all the way to the confluence with the Green River. “The river is unbelievably diverse, from high-mountain meadows, through urban Steamboat, to the high plains of the Hayden and Craig area to the canyons,” he says.

Given a choice, Van De Carr would spend his quality river time paddling through the challenging rapids on Cross Mountain Canyon on the river’s receding hydrograph. “Cross Mountain is an incredible whitewater run,” Van De Carr explains. “It can get as big as 20,000 cfs [when it is virtually un-runnable]. We’re talking about a 5-mile stretch that can be as big and technical as anything in the world. It’s a monster at that level.”

The perfect paddling situation, Van De Carr says, is to catch the river while it drops from its peak in late June, a time when water temperatures are more comfortable than they are when the river is on the rise. “Anything over 5,000 cfs is class five,” he says. “I’m 54, and I’ll never run it at that level again. I think it’s ideal from 2,000 to 4,000 cfs. It’s Grand Canyon size down there, but it’s more technical.”

Veteran angler and Steamboat resident Scott Ford has been fishing the Yampa since the 1960s. He says he no longer furrows his brow over all the competing recreational interests on the river where it flows through his hometown.

“If you want to fish the river, go in the morning before the tube hatch takes place,” Ford says with a wry smile. “I can’t fish all of the spots I want to fish in a summer, and every year I find new water within an hour of town.”

Ford, an active member of the Yampa Valley Fly Fishers, has enjoyed an enduring romance with the White River, in part, because it affords relative solitude. “I fish the White more than I do the Yampa,” he says. “It has a lot to do with access.”

With fewer anglers and the availability of more public water, the trout in the White see less pressure, resulting in a high-quality fishing experience, Ford explains.

Not coincidentally, Ford has concluded the intact hydrographs of the White and Yampa rivers are a big part of what sets them apart from many other popular trout streams in Colorado.

“The Yampa and White are special because the rivers still have their original flow characteristics,” he says.

For trout fishermen, that translates into a river where the fish still feed on a buffet of naturally-occurring aquatic insects and annelids, or worms, throughout the seasons. And that makes them less picky eaters, and easier to catch, than trout living in the cold tailwaters that flow from the bases of dams on other rivers, Ford says.

“The fish [in the White and Yampa] are not nearly so selective,” Ford explains. “You look at tailwaters, and they’re feeding exclusively on tiny insects.”

The future of recreation
How long will the recreational opportunities on the White and Yampa remain at such a high-quality level? The local roundtable formed by the Colorado Water for the 21st Century Act is working to answer that question.

Like other roundtables around the state, members of the Yampa/White/Green Basin Roundtable are launching an effort to ascertain the streamflows needed on specific, high-value stretches of mainstem rivers and tributaries to ensure non-consumptive uses of the river will remain available into the future.

By documenting flow levels needed to preserve existing recreational and environmental values on key stretches of the Yampa, the White, and their tributaries, Vertrees says the roundtable’s study will prepare the basin to answer the ultimate question: “Does the Yampa contain enough water to permit some of its flows to be diverted to other basins?”

Says Vertrees, “You have to be really careful with a river like the Yampa that is the last one of its kind.”

After all of his years spent guiding rafting customers on western rivers, Vertrees says he still gets a thrill from rowing his own family on a short float down the Yampa.

“I like to take the kids in a raft and float through downtown to Charlie’s Hole. That standing wave is a little scary, and you can’t sneak [past] it, but that’s what makes it worthwhile.”