Is the hemp boom changing water use in Colorado agriculture? 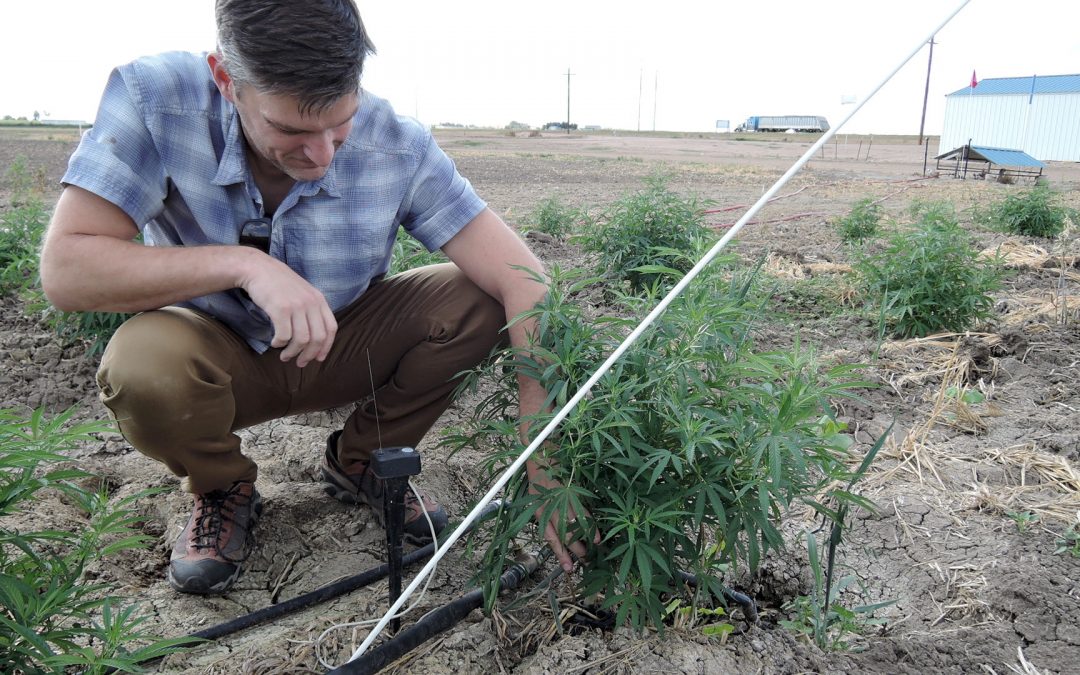 SIEP project manager, Jacon VonLembke points out one of the micrometer sensors that alerts them to changes in the hemp plant's diameter related to stressors like dehydration. Credit: Hannah Leigh Myers

Hemp is taking the Colorado agriculture industry by storm and gaining a reputation as a highly valuable, supposedly drought tolerant cash crop. But is the plant really as ideal for a state facing severe water scarcity as it’s being made out to be? Or is the outside-the-box thinking hemp is inspiring really behind hemp’s water needs and viability in the West? KGNU’s Hannah Leigh Myers spoke with researchers and visited multiple hemp grows in northeast Colorado to try to find out.

Hemp, the non-psychoactive form of cannabis, has a complicated history in the United States.

Many of the founding fathers grew hemp and praised the plant as a cash crop, then in 1937 a tax law essentially made the plant illegal. During World War II the U.S. government changed the rules again, begging farmers to grow hemp in a propaganda film called Hemp for Victory.

And now, after decades of redesignation as an illegal controlled substance, Colorado farmers are leading the way in another major hemp comeback with the plant’s high value and possible drought tolerance taking center stage. 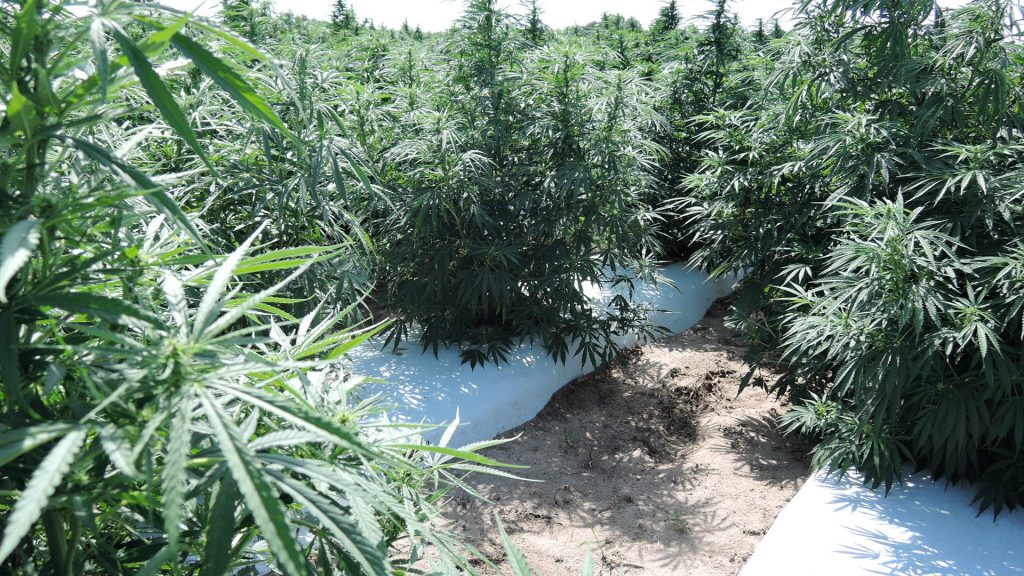 Although expensive, hemp grows like Lebsock Farms in Sterling are hopeful that delivering water to the plants via raised beds and drip irrigation will cut water use by minimizing evaporation.

However, researchers like Katie Russell, manager of Colorado State University’s Southwestern Colorado Research Center, one of multiple groups doing extensive study on hemp’s drought tolerance, feel hemp may be getting more credit for tolerating dry conditions than it currently deserves.

“I don’t think that this is a dryland crop for our area because we do have such low rainfall and it’s very variable amongst seasons. So, it could be very risky some years and could work out other years. It’s probably on point with corn. If you look at a perennial system, alfalfa for instance, it would be a water savings in comparison,” says Russell.

Part of the problem is very little research on hemp exists considering the plant was mostly off-limits to farmers and scientists until the passage of the 2014 and 2018 Farm Bills. But now, researchers like Russell are free to look into ways to help boost the plant’s value and hardiness.

“I think we could really improve hemp as a drought crop,” Russell says. “I think as we move forward in the future if we’re really targeting that at as a specific breeding purpose then I think we could find it could work in a lot more arid environments.”

CBD, an oil extracted from hemp flowers is used in a wide variety of popular products marketed for calming, healing and health. Hemp fibers in the plant’s stalk are used in items like clothing, rope and paper. Russell says regardless of the end-use, hemp farmers may be less likely to minimize hemp’s water consumption when they see how much better the plant performs with more water.

“We’re seeing larger growth habit with the higher water, greater stem diameter, more branches, which would likely then be more flowers and should equal more yield. If this were a fiber system, something that really relies on high biomass, I think you’d see a pretty good yield reduction under the lower water use scenario.”

So the variety of hemp plants currently available may not deserve the title of drought-tolerant on their own but it does appear the hemp boom is inspiring a new wave of creativity in agriculture with a focus on saving water.

Jason VonLembke, director of the Subsurface Irrigation Efficiency Project or SIEP, says the hype around hemp is pulling water-saving irrigation techniques out of the shadows and into the mainstream spotlight. “One of the cool things is that it does draw younger people in who are kind of open to these technologies and things like that. So, if anything, you might see a jump in people using efficient irrigation.”

And studying water efficiency in agriculture is exactly what VonLembke and the SIEP team do at their research facility in Kersey, Colorado, where the primary focus is 82 acres of subsurface drip irrigation. This is a system rarely used in Colorado that pumps water from a well through a filtration system that can add nutrients to the water before delivering it directly to the roots of rows of plants planted on mounds.

“If you’re irrigating with flood irrigation your crop is absorbing about 45% and the other 55% of that water is either runoff or evaporates. If you’re using a pivot circle your efficiency is around 80%. So, what we’re trying to do with drip irrigation is get those efficiencies up to 95-98%,” VonLembke explains.

SIEP researchers are growing hemp because it does well with subsurface drip irrigation and its value makes the high cost of switching to the water-efficient drip system more feasible. “The system is expensive. It costs about $1,500 to $1,700 an acre. We have been growing alfalfa here for the last three or four seasons and the return on the investment of alfalfa, which prior to hemp was what we believed to be one of the most valuable cash crops because you can get about $130 to $140 a ton for that. Compare that to hemp, we can sell our hemp flower at $35 a pound.”

SIEP is studying other less expensive, non-traditional forms of irrigation that also work well with hemp.

Their mobile drip system is a more accessible water-saving design that uses a traditional pivot irrigation system, the type you see on most farmland working its way across the field watering crops from above, but this one has hoses or drip lines attached to each nozzle delivering water directly to the ground around the plants as it moves. “I’m so excited about this. I think this is one of the immediate answers,” says VonLembke. 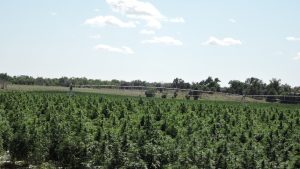 A working irrigation pivot sitting unused amongst the drip-irrigated hemp crop shows how confident Lebsock Farms is that subsurface irrigation will be worth the investment.

An hour and a half away in Sterling, Colorado the Lebsock hemp farm is testing irritating hemp with drip on a major scale.

David Lebsock and his family are growing a thousand acres of hemp for CBD. Their entire crop is irrigated on a subsurface drip system. They’re hoping drip will save them 40% to 50% of their water.

David Lebsock says another benefit of drip irrigation is it allows Lebsock to use more of their land. “See where the pivot actually ends right there? All that from here to there was non-irrigated but now we’re able to use it as production.” The Lebsock team believes they are still using less water even though they’re using more of their space. “I mean, right now we haven’t watered for the last week,” says Lebsock. “Does that plant look like it’s droughty? Not at all.”

With some farmers confident in hemp’s water-saving value and others unsure the plant’s current drought tolerance isn’t being oversold, all parties are anxiously awaiting the new data and irrigation related discoveries uncovered with each hemp harvest, discoveries that are undoubtedly changing the Colorado agriculture industry as a whole.