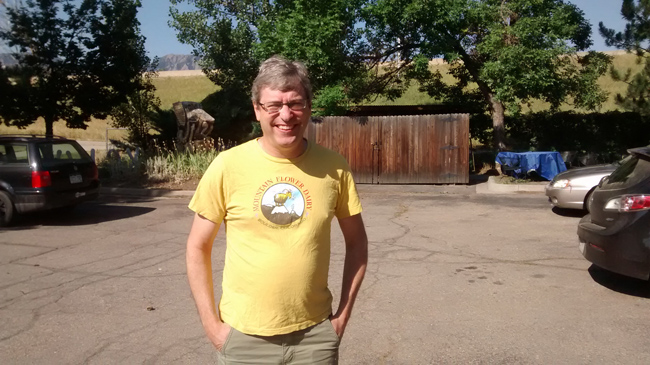 Rain barrels are now legal in Colorado. This comes after several years of debate and opposition from those concerned about possible impacts on downstream water users. Now, conservationists are eyeing them and other water capture tools as a way to stretch the state’s overburdened supply.

“We have a lot of people looking at them,” says Tom Stevens, who works in the plumbing department. “But not a lot of sales. Yet.”

But that’s expected to change and sales should increase this month as new legislation goes into effect.

Colorado residents can now have up to two rain barrels with a total capacity of 110 gallons for irrigation purposes. The law limits the barrels to residential use, though, and many supporters hope to see that change.

“We would have liked to have seen a much larger opportunity for rain-water harvesting,” says Mason. “But where we landed is that we’re going to allow for residents of Colorado to get a great education about how much water we’re using, and how much water we can find from another source.”

One of those sources might be gray water. That’s the water that comes out of showers, clothes washers and sinks, that’s then put to a second beneficial use, like flushing a toilet. Colorado State University is considered a pioneer in this research, but like rain barrels, gray water also comes up against the state’s complex water laws.

“We have to think about all of the users downstream and to the extent that we can reuse water, fine, but we also need to make sure that we’re returning water and contributing to the overall eco-system,” says Peter Mayer, an engineer who has prepared water conservation plans for communities like Aspen and Glenwood Springs.

Mayer says some water rights, particularly those attached to water from the Western Slope, allow for reuse, but others, mostly in the Front Range, require that water be used only once. That can create a significant barrier for utilizing gray water, something Jonathan Akins, CU Boulder’s Campus Civil Engineer knows all too well. The University of Colorado worked with the city of Boulder on this issue before constructing a nearly half-million-dollar system at one of its dorms in 2012.

“We negotiated with them on water rights to see if we could get the out of basin water that we could allocate to this system, to make sure they were comfortable with what kind of water they could provide to CU for that,” says Akins.

The water rights were just one hurdle. The University then had to apply for a series of exemptions and permits from various state agencies. Akins says the system will reuse about 30% of the building’s water, which comes to about half a million gallons.

“We have over 500 toilets that we’re feeding, plus we have to capture all the water as well,” says Akins. “So all the capture sources have to come into this room, too, with a whole new pumping, storage, disinfection system in this room.”

In 2013, lawmakers passed a bill that says gray water use is only allowed in areas where the local governments have adopted an ordinance. That’s created another administrative hurdle for CU, so for the time being, this state of the art system is lying dormant. Akins hopes to have it fully approved and operational by the end of the year.

The actual impact of water capture and reuse is yet to be seen. Water engineer Peter Mayer says it’s not technically saving any water, rather, it’s stretching the supply—allowing more to be done with the same amount. And he says he is hopeful it’s part of a larger picture of water conservation.

The Colorado Water Plan identifies water reuse as playing an important role in the state’s future water supply. In April, Denver created a local program to help oversee gray water use in the city, the first municipal-wide gray water program in the state.

Connecting the Drops is a collaboration between Rocky Mountain Community Radio stations and the Colorado Foundation for Water Education. Find out more about conservation through their updated citizens’ guide to Colorado water conservation at YourWaterColorado.org. With support from COBank.