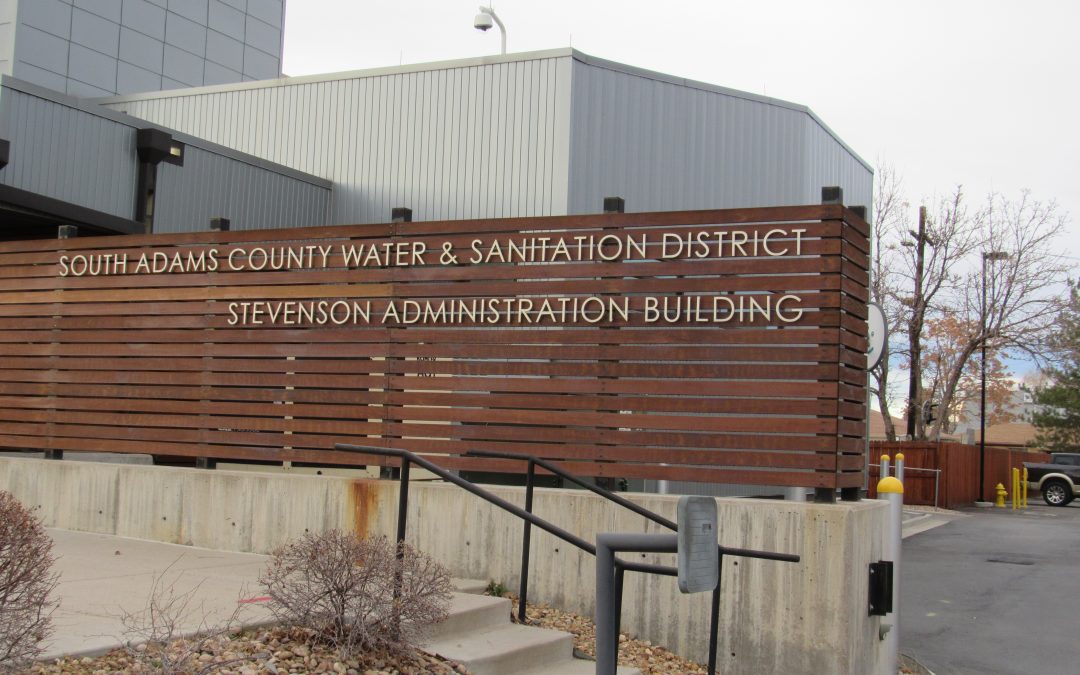 The South Adams County Water and Sanitation district is one of several water providers around the state now treating to remove PFAS from its drinking water supplies. Nov. 23, 2021. Credit: Jerd Smith

The Colorado health department is investigating a contaminated underground plume issuing from land next to the Denver Fire Training Academy to determine whether it is responsible for high levels of so-called “forever chemicals” in the raw water supply of an Adams County water district that serves more than 65,000 people in the north metro area.

The contamination was discovered in 2018, and since then, officials said, the City of Denver’s fire training center has stopped using the fire-fighting foam containing hazardous PFAS, or poly- and per-fluoroalkyl substances. The compounds have long lifespans and have been linked to certain cancers. Contained in such common substances as Teflon and Scotchguard, they are also widely used to fight fires.

A spokesperson for the fire academy declined to comment on the investigation and referred media inquiries to the Denver Department of Public Health and Environment, which said via email that it was working with the state to address the problem. It declined an interview request.

Jennifer Talbert, a hazardous materials expert overseeing the investigation for the Colorado Department of Public Health and Environment (CDPHE), said she expects the investigation to be done later this year, at which time decisions on how to clean up the contaminants will be made.

“They did discover PFAS within a certain region of the [fire academy] site, but we need to do more sampling and investigation. We’re developing the plume boundary now,” Talbert said.

The four contaminated wells owned by the South Adams County Water and Sanitation District were shut down quickly in 2018 after testing showed extraordinarily high PFAS levels, 2400 parts per trillion (ppt), in the raw water, according to Kipp Scott, manager of water systems at the district.

The U.S. Environmental Protection Agency’s health advisory standard for PFAS says levels should be no higher than 70 ppt.

Since then the state and the Tri-County Health Department have issued alerts to private well owners in the area, notifying them not to drink the contaminated water. Other residents in the region are served by the South Adams County district, whose water is being treated to reduce PFAS levels to 35 ppt, a level that is considered safe under the existing voluntary federal guideline.

Anyone concerned about potential contaminants in their drinking water can have free testing done.

The CDPHE’s Talbert said it hasn’t determined who is responsible for the contamination and won’t be able to do so until its investigation is finished.

But Scott said no other PFAS sources within the district have been identified other than those found at the fire academy, whose site is less than a half mile from the contaminated wells.

“We infer that that is the largest source in the area that is affecting our groundwater supply,” Scott said. “There are no other sources identified.”

Little was known about the unregulated PFAS chemicals in Colorado until 2015 when national news began appearing about their links to cancer, their prevalence in fire-fighting foam used at military bases and fire-fighting centers, and their presence in groundwater.

Two years ago, as more testing revealed more contaminated sites, the CDPHE vowed to boost its oversight. Since then the Colorado Legislature has provided the health department with more authority and money to combat the problem. CDPHE’s approach has included conducting surveys to identify contaminated sites and affected drinking water systems, spending as much as $8 million to buy contaminated firefighting foam and store it, and helping communities whose water has been tainted by the compounds with testing support and grants to help cover treatment costs.

Dozens of fire departments, military facilities, water utilities, and commercial properties as diverse as hotels and apartment complexes are now monitoring and testing for the substances.

As Colorado ramped up its oversight, last year the EPA announced it would begin work on  a regulation that will, for the first time, set an official limit on PFAS compounds in drinking water. It is set to be available for public review this fall and would be finalized by the fall of 2023.

In the meantime, Scott said the South Adams County Water and Sanitation District has spent $5 million to build a sophisticated testing and monitoring lab, and to strengthen its treatment program enough to comply with the 70 ppt federal health advisory limit.

But that won’t be enough long-term to ensure its customers have access to safe drinking water, Scott said, so the district is preparing to install an advanced $70 million treatment system to reduce PFAS levels even further. That price tag is almost three times the size of the district’s annual $26 million budget.

“If the health advisory number should go lower, and we think it will, we don’t have enough capacity to go to a lower number,” Scott said. “And we need that raw water from the wells we shut down to meet future demand.”

Who will pay to correct the situation isn’t clear yet, but Scott said the cost should not fall on his district. “We’ve spent around $5 million treating for this contaminant that is in our water supply, and we did not put it there. But that $5 million cost is being paid by each one of our residents through higher rates and fees.”

CDPHE’s Talbert said cleaning up the contamination near the fire training facility and other sites will likely be complicated because the chemicals have never been regulated and, as a result, methods and technologies for clean-up are still being developed. But she said most residents in the region have access to treated drinking water through their water utilities.

“The science is new,” Talbert said,” and we don’t know the extent of the contamination. If we find that people have an exposure we will get them on bottled water and/or a reverse osmosis system.”