This fall Colorado has launched two new programs, one aimed at removing firefighting foam containing so-called “forever chemicals” from fire departments, military bases and other properties and an emergency grant program aimed at helping communities where the chemicals have appeared in drinking water.

The chemicals, known broadly as PFAS or poly- and per-fluoroalkyl substances, have long lifespans and have been linked to certain cancers. Contained in such common substances as Teflon and Scotchguard, they are also widely used to fight fires, particularly those involving jet fuel.

“We’re learning more every day about PFAS and its exposure in our environment,” said Erin Garcia, a spokeswoman with the Colorado Department of Public Health and Environment (CDPHE).

The unregulated substances were once thought to be rare, but since at least 2015 have shown up at alarming levels in communities such as Fountain and Security, where groundwater was contaminated by runoff from the nearby Peterson Air Force Base. Those two communities were forced to shut down their water systems, find temporary substitute supplies, and build new treatment systems.

The chemicals have also been found in groundwater wells that serve Commerce City and in areas near the Suncor Refinery in Adams County and Buckley Air Force Base in Aurora, among other sites.

Two years ago, as more testing revealed more contaminated sites, the CDPHE vowed to boost its oversight. Since then the Colorado Legislature has provided the health department with more authority and money to combat the problem, including conducting surveys to identify contaminated sites and drinking water systems, and providing as much as $8 million to buy contaminated firefighting foam and store it, and to help communities whose water has been tainted by the compounds.

Dozens of fire departments, military facilities, water utilities, and commercial properties as diverse as hotels and apartment complexes, are now monitoring and testing for the substances.

As Colorado has ramped up its oversight,  last month the EPA announced it would begin work on  a regulation that will, for the first time, set a limit on PFAS compounds in drinking water. It is set to be available for public review next fall and would be finalized by the fall of 2023.

“We want the EPA to hit that timeline,” he said. 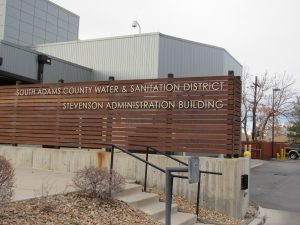 The South Adams County Water and Sanitation district is one of several water providers around the state now treating to remove PFAS from its drinking water supplies. Nov. 23, 2021. Credit: Jerd Smith

The South Adams County Water and Sanitation District, which serves Commerce City, is watching the state’s progress carefully. It discovered PFAS contamination in 2018 when it began testing voluntarily for the substances after the crises in Fountain and Security.

It already had in place a carbon filtering system and was able to strengthen it to reduce PFAS contamination in its system to 35 parts per trillion (ppt), half of the EPA’s voluntary 70 ppt guideline. It also had to shut down wells whose contamination levels were so high, 2400 ppt, that no amount of carbon filtering could remove the chemicals fast enough to keep the drinking water safe.

“The key here is that we can treat the current levels,” said Kipp Scott, manager of drinking systems at the South Adams County district, but better treatment will be needed once the federal regulation takes effect.

And that means the district will need to install a new system that uses an ion exchange technology to remove the chemicals. Its estimated cost is $70 million. Scott said the district hopes the state’s emergency grant fund and new federal infrastructure dollars will help cover the cost.

“I hope this moves in the right direction, and we can continue to provide safe water to our customers,” Scott said.