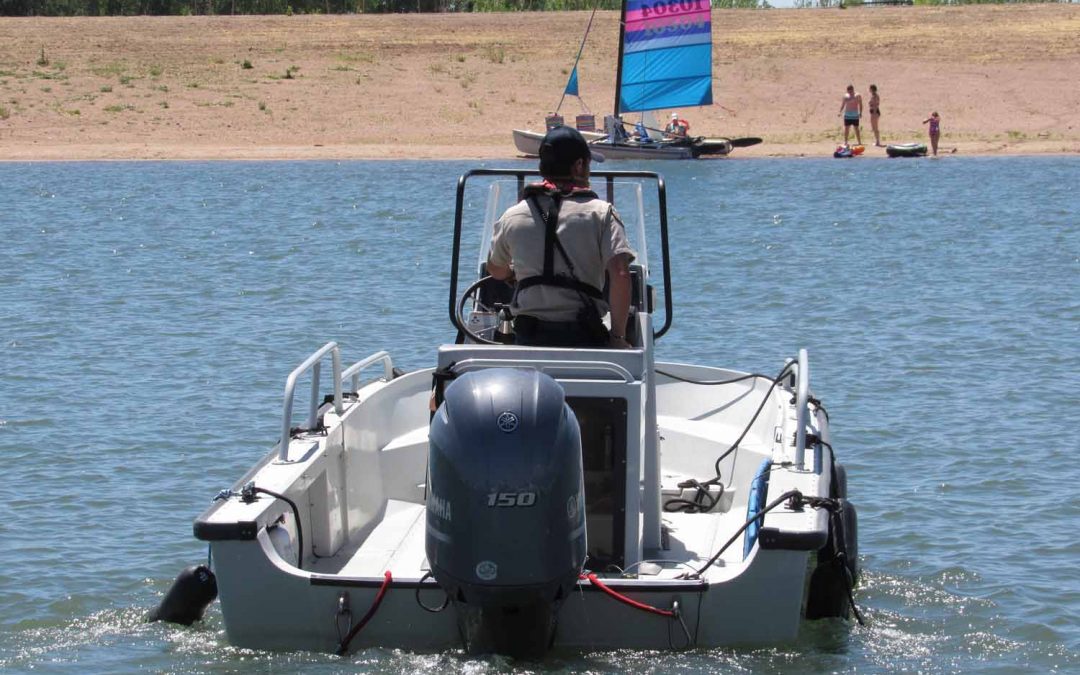 A Colorado Parks and Wildlife officer heads out on patrol at Chatfield Reservoir. A $171 million redesign at the popular lake is now complete, providing more water storage for Front Range cities and farmers. Last week the Colorado Water Conservation Board approved a settlement that will pave the way for an environmental water plan to help offset the impacts of the new storage. Credit: Jerd Smith

Colorado water officials have reached an agreement removing one of the last barriers to a new environmental water program in Chatfield Reservoir.

The agreement settles a dispute among water agencies about who could use storage space in a special environmental pool in the reservoir.

The agreement is one of the final steps in the re-operation of the recreational site just southwest of Denver and comes after years of permitting disputes and lawsuits.

The federally owned reservoir was built in 1967 and was initially designed for flood protection in years when the South Platte River surged beyond its banks.

But as drought and climate change, as well as population growth, increased pressure on urban and agricultural water supplies on the Front Range, federal, state and local agencies began working to convert a portion of Chatfield’s flood storage to municipal and agricultural water storage. The reallocated storage space totals 20,600 acre-feet, of which 2,100 acre-feet is designated as the environmental pool.

The new storage will give south Denver metro area cities such as Highlands Ranch more protection against drought and diminishing groundwater supplies, and will give farmers on the Eastern Plains the ability to use stored water to irrigate crops late in the season when flows in the South Platte River run low. Water from the environmental pool will be used for releases to boost streamflows downstream, improving water quality and providing other environmental and recreational benefits. Downstream irrigators will also benefit from those releases.

The physical work on the re-operation was completed last year after the project won federal approval and a major lawsuit against it failed.

The latest legal dispute stems from a disagreement between Centennial Water and Sanitation District, which serves Highlands Ranch, and the Greeley-based Central Colorado Conservancy District, over whose water rights could be used to fill the environmental storage space and whose space would be filled first.

Centennial’s and Central’s boards must still approve the settlement, according to Lauren Ris, deputy director of the Colorado Water Conservation Board, which negotiated the deal. [Ris also serves on the Board of Trustees for Water Education Colorado, which sponsors Fresh Water News.]

“There was a disagreement among the parties about which water rights could be used,” Ris said, with ultimately the Colorado Water Conservation Board giving up some of its storage space to settle the dispute between the water agencies.

Centennial Water Resources Manager Rick McLoud said his agency had spent millions of dollars and more than 20 years to ensure that the new Chatfield plan would serve Highlands Ranch well, and that its ability to store water there would not get bumped too far down the priority list.

“We spent 27 years working to get it and more than $55 million. We did not want to lose out,” McLoud said.

Environmentalists, including the Denver Chapter of the Audubon Society, had long battled the re-operation of the reservoir because it inundated the existing shoreline and resulted in a loss of bird habitat, among other issues.

New habitat has been set aside farther downstream for birds and other species, and water from the environmental pool will help maintain streamflows and habitat as it is released.

Abby Burk, an Audubon Society official, said her group is still deeply worried about the loss of habitat.

But she said the fierce drought and ongoing shortages of water for environmental purposes make the Chatfield habitat water critically important.

“Chatfield was a hard go. We lost some strong riparian areas for birds,” Burk said. “But anytime we can have environmental benefits, particularly in a challenging drought year, we have to go for it.”

Correction: An earlier version of this article stated incorrectly that Colorado Parks and Wildlife gave up some of its Chatfield storage space to help settle the dispute.