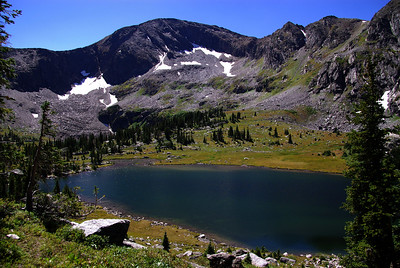 The U.S. Forest Service said it is just weeks away from deciding whether a high-profile request to explore the geological feasibility of a new reservoir site in Colorado’s Eagle County that would capture water flowing from the iconic Holy Cross Wilderness should be granted.

The request comes from Aurora and Colorado Springs, among others, who want to be able to capture more of the water flowing from the wilderness area to meet their own growing needs.

David Boyd, a spokesman for the U.S. Forest Service, said a decision is expected “early this year.”

Proponents had hoped for a decision late last summer, but Boyd said the delay wasn’t unusual and was triggered in part by last summer’s Grizzly Creek Fire.

Aurora and Colorado Springs, which own and operate the only reservoir in the area, Homestake I, hope to demonstrate that they can divert more water and build another reservoir to serve Front Range and West Slope interests without damaging the delicate wetlands and streams in the mountain forests there.

But in advance of any request to build an actual reservoir, they have asked the Forest Service for a special use permit to survey the area and to bore several test holes to determine soil conditions and areas best suited to build the proposed Whitney Reservoir.

If a reservoir were to be built, it would also require that the 122,000-acre-plus wilderness area shrink by 500 acres, an action that will require congressional approval.

Significant opposition to the exploratory permit erupted almost as soon as the proposal became public last year. The U.S. Forest Service received more than 500 comments on the proposal last summer. The majority of those were opposed to it, citing the need to protect the wilderness and the need to preserve as much of the region’s water as possible. The Eagle River, a part of the Colorado River system, is fed in large part by the Holy Cross watershed.

Warren Hern, a co-founder of the Defenders of the Holy Cross Wilderness, said the plan would do irrevocable damage to the rare bogs and wildflowers that populate the area.

He also noted that the proposed reservoir site lies along a major fault line.

“We will do everything in our power to stop this,” Hern said.

Greg Baker, a spokesman for Aurora Water, said his agency is well aware of the special relationship thousands of Coloradans have with the Holy Cross and its spectacular wetlands and hiking trails.

Baker declined to comment for this article, saying the agency would wait until the Forest Service issues a decision.

But in a recent interview, Baker said the cities had little choice but to pursue additional water supplies to meet growing demand.

“Water is a rare commodity and it needs to be used very carefully,” Baker said.

He also said any environmental damage that might occur could be successfully mitigated.

“What you do is wetlands rehabilitation, where you develop wetlands in other areas on a two- or three-to-one basis so you’re restoring additional wetlands for those you may lose,” Baker said.

The new proposal comes under a 1998 agreement known as the Eagle River Memorandum of Understanding, which allows the reservoir proponents to develop enough water to serve environmental, municipal and industrial interests.

Parties to the 1998 agreement include Aurora, Colorado Springs, the Colorado River District, the Eagle River Water and Sanitation District, and the Upper Eagle Regional Water Authority.

Located west of Vail between Minturn and Leadville, the Holy Cross Wilderness Area was the subject of a significant battle in the 1980s when Aurora and Colorado Springs sought to build a second major reservoir there known as Homestake II.

After the case made it all the way to the U.S. Supreme Court, Homestake II was defeated in 1994.

In exchange, however, the cities were granted permission to develop a smaller amount of water in the future in partnership with Western Slope interests, resulting in the permit request now being considered by the Forest Service.

Correction: An earlier version of this article incorrectly listed Vail Associates as a participant in the Whitney Reservoir proposal.